We passed him going up the road. I thought he was an eagle and turned around to try for a shot. I always have a camera somewhere close. Meanwhile Colleen did not estimate the spot well. She thought he’d flown. But no! I came upon him in the same tree. He was eating a meal. (Don’t ask what the dead thing is.) I got a mug shot – right, left, and frontal. Nice detail. It was kind of like a school photo. Action or some unique behavior would have been appreciated. I was happy to catch a good shot. I thought he was an eagle. But an osprey is good too. They don’t exactly sit by the road and pose. At least I did not get funny expressions as he chewed. 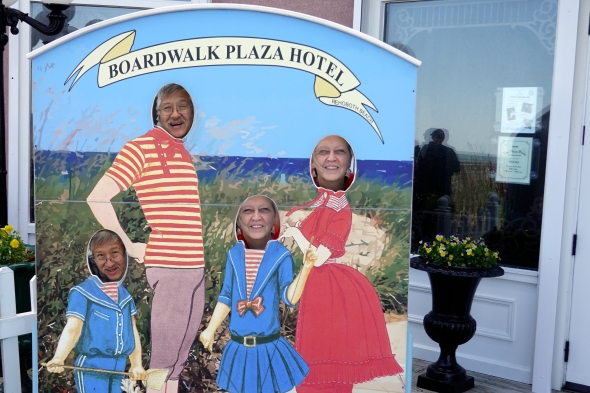 I can Photoshop. Of course, I can. We stuck our heads in the holes and I melded them later. Colleen’s pose looks the same but I assure you we took multiple shots. It just goes to show you how steady a force she has been in my life. She’s a constant. … constantly reminding me of the speed limit, of the weather, that the door is unlocked… well to know what it’s like…to know her is to love her…a lot! 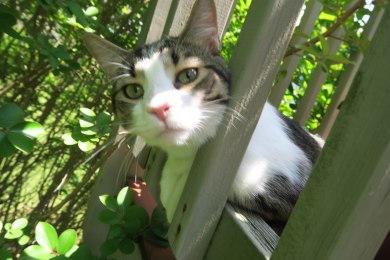 Yup, seven. The odds of getting them in one photo is near infinitesimal. They disrupt all order so that there are always things out of place. And catproof is akin to childproof. Anything and everything gets knocked out of place. Some rugs have not been straight in our house in forever. Every once in a while, I try to get all seven within a moment of one another. They like to get out on the deck and sun and eat grass. It’s my opportunity. Of course, Ray always daydreams of being elsewhere. The rest are content to stare at me. By now they are used to the presence of a camera in front of my face. I suppose it’s nuts to have seven cats. They are content and we would never part with a single character.

Birthday! To say that we are happy… well, yeah! Can you tell? The past years have been pretty special. I hope your birthday is as happy as I can make it. Who could have guessed that from when we met in the third grade, you would so profoundly affect my life. May all the wishes on your birthday cake candles come true. 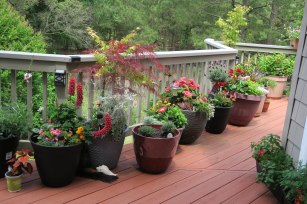 I am very pleased at how the spring planting turned out. And with my good images piling up, you would have a good flower photo every day for a good long time. Instead, I summarize. I may sneak some more shots but… In the front the wisteria is coming along nicely. They are beginning to grow across and obscure the balcony rail. Roses, the bane of my garden, occasionally reward me with some color. I have mostly sickly looking roses. Nope, I am not a rose person. Otherwise the back deck is predicated on summer long color. It has no organization. There is a mix of perennial and annual flowers. Sometimes the perennials show up again and sometimes not. Herbs grow. And for the first time I am cooking with fresh herbs. The cats eat fresh catnip. But mostly, they enjoy grass. Imagine? My cats eat grass like cows.

You get the picture…

Into the wide world, Ray and Nutley have both attempted to go explore. Ray has jumped the gate with ease and run off leading me on a merry chase. I would miss him or his brother if they went missing. Colleen would never forgive me. I tried a harness and a break away collar. No luck, both cats broke free in seconds. Darn! So, a real collar and a tether. It worked except the twins would get entangled and run out of rope. No one was hung. I did not give them that much rope. So, aside from moving the rope anchor around, it’s a system that has assured that the twins will remain on the reservation. My sanity has been restored and is intact for now. 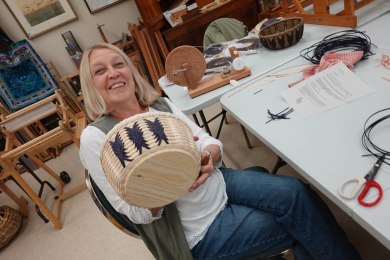 This would be our 4th try at basket making. I would say it was impressive work. Colleen had doubt we could do this when she signed us up. Guess which basket I made? It’s called a feather basket for the decorative embellishment. It was dead simple to do. And the result is very striking. A group of women showed up – and me. Why am I the only guy? Though I was close, I was not able to finish in a day’s work. Our cousins have had great sport making fun of us. But the result speaks for itself. The only thing left is the staining to make the baskets look more aged. Given the expense, it’s less costly to get old baskets in the antique stores we frequent. However, there is a great deal of satisfaction in completing a project and the social gathering is priceless. Yup, everyone guess correctly about the one I made.

No one wants bad news. Positive good news is best. Doctors want to cure. Patients should not leave in despair. Any drug treatment as long as it doesn’t hurt is acceptable. I preached back in 2008 that Pfizer made ~$5 billion a year on a drug to treat fibromyalgia. The diagnosis was a made up medical diagnosis. There is no test that supports the diagnosis. But no one believed it. At least the primary care MD’s at my talk objected. It worked in their patients. Once again there is a voice in the crowd that objects. And if you follow the money, that voice will be stilled. After all Pfizer has millions to spend to protect billions in sales. No doubt there are many among you who can swear it works. Have you considered modern day Snake Oil? 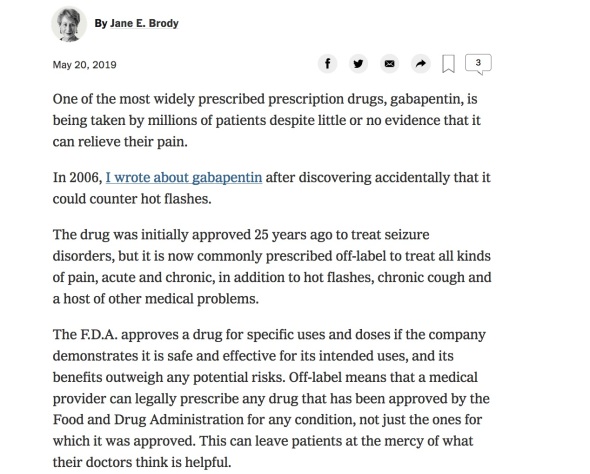 No harm no foul? There are side effects. That’s why folks believe the drug is effective. You know you have taken it because it’s side effects are real. Physicians prescribe it because patients have said it works. It’s a self serving cycle. Call it psychological symbiosis. The only real beneficiary is Pfizer. Money talks. Every time I watch the TV commercial and the disclaimers I am saddened by the disinformation. Gaba, lyrica, horizant – all drugs masquerading as cures for diseases that aren’t.

Ida had foxes give birth in her barn. They would come out around 7PM. And we were fortunate enough to see them the night we visited. The light was poor. But I got foxes. Neat! There were a bunch of them. More than one mom? They were brave. One just stood his ground and let me get a closeup.

Nutley and Ray are restricted on the outdoor deck. They wear a collar on a tether in order to prevent them from going over the gate and into the wide world. I anchor the rope to the outdoor table and move the anchor as they tangle up going around the furniture. Got it? I looked down and noticed blood on the deck. It was funny looking thin almost like grape juice. Nope! Blood! Colleen and I checked. No mosquitoes. Neither of us was bleeding. It was Nutley. Big! All over. There was a trail of blood around the planter. Dunno? The cut was small – right on his ear. But it kept bleeding. Pressure did not work. We went through several paper towels. I’d get the bleeding to slow down and Nutley would shake his head vigorously and start the bleeding all over again. Normal bleeding time for humans is under 8 minutes. In cats? It just kept bleeding. …. til it stopped suddenly. It bled once more with another head shake. But after that it stopped. To be sure it was a traumatic experience for us both (human and cat). Nutley howled pitifully. But it all stopped. And Nutley lives!