They make fun of me. I take pictures, randomly, of everything. There’s no rhyme nor reason. Is it just to take something, anything? Why!?? Film cost $$. A memory card costs $$. But the bang for your buck… is incomparable. So, I shoot, whatever. Lately – for a while – I shoot old typewriters. Now, I shoot in three views – face on, top down, and the keys. Three pictures explain better than my description herein. I have seen many many typewriters. I have the view of them. Why? Dunno, but I do. 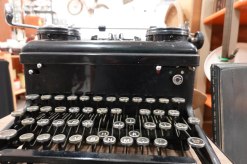 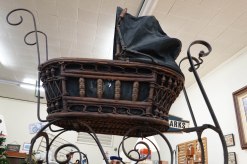 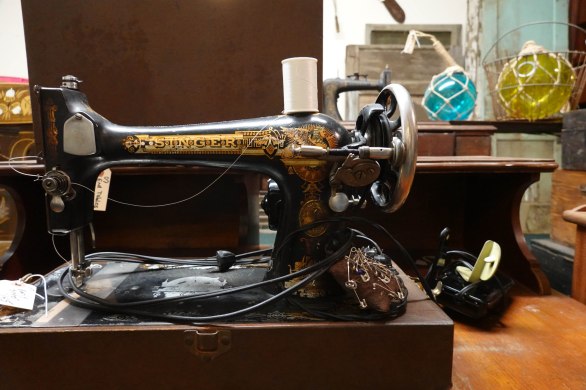 What? More. The baby pram? Um? Colleen has admired them. We don’t need one. Right. There are no kids at home. Old Singer sewing machine. Don’t ask. I’ve got too many to count. Don’t laugh. Old typewriter. Ditto. Old writing desk. Curious. Neat. And a harp? That’s something you don’t see often.

We do antique stores. Shop, browse, pick around. Mostly we see stuff and wonder who it is that would want to take it home. There are some good ideas. There was a wooden ruler to measure height. I had marks on a wall for both my kids. When we moved I couldn’t take the wall. The ruler is a great idea. Old adding machines? And, there are things we have no idea what they are/were for.

Now for something different 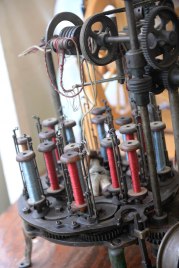 Weaving and spinning stuff is mostly made from wood. ??? dunno. I was struck by this little loom made of metal. It stood out. And then there was this ?”cord” maker (also metal)? We were all puzzled – what is it? And of course a guy bought it at auction for $$hundreds. Go figure. Give someone enough rope…

Here’s where I made a post and then went to find a picture. On another note (completely unrelated and irrelevant to madder) I have surpassed 468,000 digital images since 2003. The cost savings in digital vs film is staggering. And the volume of images because the cost is low has risen exponentially. The first digital cameras were made by Kodak with a Nikon SLR body and cost about $10,000. Real estate gains in value. Cameras thankfully became less expensive. There is no connection of numbers to yesterday’s madder. I just thought I would randomly marvel at time and progress. 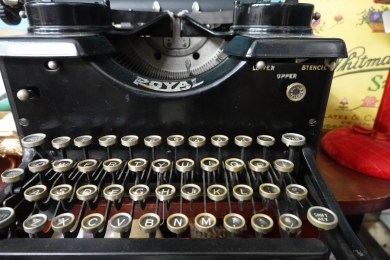 And, who would go out and buy a typewriter? There are kids who have never seen film. By the way, I have a database that allows me to keep track of the images to the extent that it is only mildly painful to lay my hands on an image from years ago. 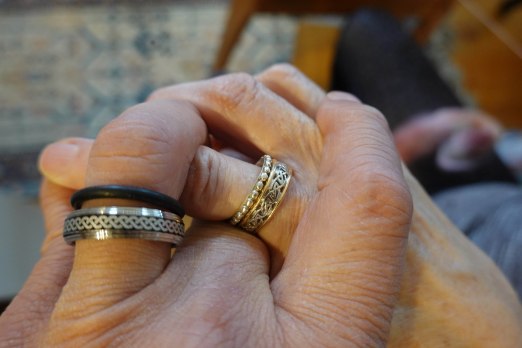 Look online and it’s easy to find a ring guard. Of course, if you are a surgeon you adapt. In the garage if you don’t have a hammer, a screw driver will do. Don’t laugh – too hard. You know you’ve done it too. Our wedding rings were too large – about ½ size each. Imagine that? It’s just how it is. I lost mine within 24 hours after putting it on. Oh my!! Colleen found it. Lucky!! And so as not to repeat the mistake, I set out to find a low-tech solution. A rubber 0 ring. Works! Not stylish – at all. And for Colleen? No! No “O” ring. Tacky! Ok, one trip to the antique store, (oh no! $$$), but one ring, one try, fit, done. Yes, there was only one ring in that case… and for under $10. Everyone went away happy. Sometimes there is a bit of luck involved. Both rings are in place and safe. 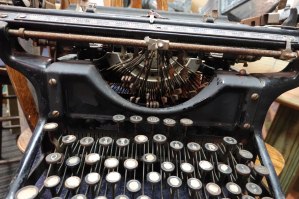 I shoot typewriters. Funny, does anyone else? You gotta have a plan. I shoot them in two views – looking down on the keyboard and front on at the machine. Now, I have a third view – looking at the keys. I will adjust my angle slightly to get the brand name in the image.

I was surprised to see that a machine had keys for 1, 10, 100, 1000. Neat trick. I did not check to see if the numbers printed out from one key in one stroke. That would require some kind of different key.

Typewriters? I got ‘em. Two. The first was when I dropped David at college. The sucker had to have weighed 25 pounds and I made him ship it home. He was going to trash it – too heavy to ship home. The other was identical to my college Underwood. It and I spent many a night finishing a paper at 3AM. I got that machine. As for the rest, they are generally in poor shape and expensive $$$. Nope, I do not need a paperweight. I still shoot them. It’s a nice collection of images. Now I will shoot 3 images each time.

It was explained to me. This little box is used to collect marbles. Each voter in the room is given a white and black marble. The box is passed around and each person drops either a white or black marble into the hole. The box is opened (slide) and if there is one black marble the issue/vote fails to pass. Blackballed! Who knew? 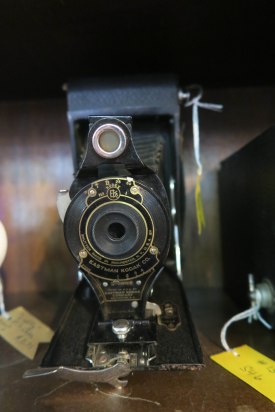 They (old cameras) don’t sell. They have no inherent value except as a dust collector. Film is gone. I know I’m being extreme in saying this. You probably can find film and even get it developed. But, film cameras are really mostly a curiosity nowadays. Soon enough few, if any, will remember how to load film into a camera. The Argus C3 (the “brick”) was my first ever camera – that I shot a picture. It was dismal. There was nothing automatic and I shot with nary a lesson. I shot in Charleston, WV when I won the Golden Horseshoe award. Nada! Not a single frame could be printed. I’ve never used a folding view camera. No box camera. And just like that … iPhone. We’ve come far. I have a collection of old cameras. Someday someone will try to sell them for money. Right now they are overpriced paperweights loaded with nostalgia.

At a certain age they tell you to downsize. You can’t take it with you. You are allowed to look. How about a Welsh chicken coop cupboard? Never seen one till now. I didn’t know I wanted one. This was a monster piece more than 10 foot wide. Put your dinner in the coop and you don’t have to go out later to catch it. Rabbit, chicken, it’s been done before. They wanted $thousands. 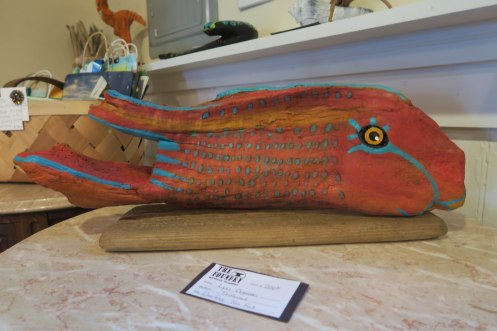 A small town. I can’t remember which. Go there. There is native American art. It’s a town of few stores. Few enough people find it. The prices are high. Why not? There’s simply very little traffic. 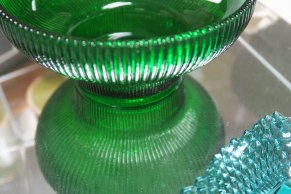 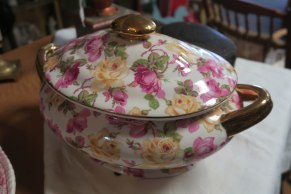 Garish porcelain?  I neglected to image an oyster plate. We learned they come from France. The valuable collectable ones go for $hundreds. Now you know too. I don’t want one. I don’t much care to eat oysters. Green Hoosier glass? It’s not depression uranium glass. No value. About $9 on eBay. Just looking. I don’t have room on the shelf. I guess I’ll build some.