Back around 1980, Lisa and I were taking a timeout. We were sort of broken up. So she went to Eluthera to vacation. I wandered up to Boston to visit an OR nurse Ann (Sweeney) Levy. She was married to a GI specialist. She had been the Neuro OR coordinator while I was a resident at NYU. Her mom had had a brain tumor and I had assisted the Chief in her surgery, which turned out well. Leaving Boston, I drove to Cape Cod on a Sunday evening in October. All the traffic on the road was headed away from Cape Cod, bumper to bumper. I felt like I was going against the evacuating tide of traffic in my lone car headed to Providence. Wandering the dunes the next day, I chanced upon this house and got these images of the dunes with the autumn storm clouds. The house is gone now, changed forever into a non-picturesque photo-op some years back. It took me about 30 years to return to this spot. Things change. But, back then, when I took these images, they are iconic in my memory and can never be repeated. Like time it’s a one way trip. I could have done better with the composition. The house is a bit too centered. My father in law, Bill, offered to crop it when he framed the photo. But I decided to keep it as I shot it. 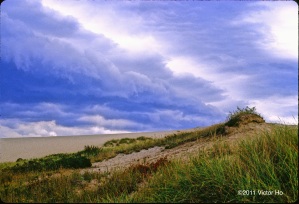 This is one of two iconic images I took in Cape Cod in October of the late 1970’s. The clouds were so foreboding. Lisa vacationed in the Caribbean and swam with with a barracuda. I traveled to visit one of my OR nurses in Boston. After leaving her family I traveled to Provincetown and found myself immersed in the local culture when I entered a men only restaurant for dinner. This house out on the seashore is gone now. It had already been abandoned when I took this shot on slide film. It’s been transformed into a public use building. Alas, the image can not be reproduced with digital imaging. When my father in law, Grandpa Bill, framed this photo he commented that the house was too centered. The proper cropping should be off to the side. I kept it this way but years later I wish to say that he was right. The framed photo in our house has faded somewhat.

The location for this slide like the house was out on the dunes of Cape Cod. I will admit that the scan could be tweaked, but you certainly get the idea. It was one of those crazy days when the elements were all lined up and waiting for the camera. At least this time I got the composition right. I returned to this same area when I visited Cape Cod a few years back. The skies were gray but no where near what I had experienced the first time so many decades before. Sometimes, you can’t go back.