Why not? People get married everyday. I guess mostly weekends are preferred dates to get married. But in a public way everyone gets to celebrate with you. This couple was rushing along to get pictures along the boat lake in the park. Okay I get the photographer dressed casually. The bride has pants under the dress and her jacket over it. The groom might need to grow into his tux. My first impression is that his shoes are not formal either. No matter, a newly wed couple is always a fine photo opportunity. 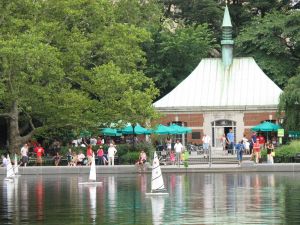 This is another favorite location for movie producers. The boathouse is so named for remote control boats that ply the pond. There are rental boats. Or if you are hardcore, you bring your own. The picture is all about New York City.

If you go, this fountain is one that sits close by to the boat basin from which folks rent rowboats on a nice day. There are now gondoliers (Venice Italy) who can take you out. It’s not the same as Venice. The fountain is a popular NYC location in the movies so even if you haven’t been there, you’ve probably seen this fountain. I got this shot on one of my bike trips through the park. I bike and I always have a camera. Then you get to combine all the things you like to do…multitasking. 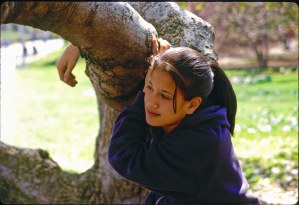 They talk about Washington DC. And some say Japan. I say Central Park in New York City. I get lots of shots, sometimes good, sometimes better, nothing quintessential yet. But I remember once when J and I walked the park together and she was just getting to know photography. 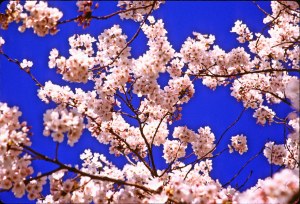 And the brilliance of the forsythia… it lasts so fleetingly, the rest of the year spent in tangled obscurity. But that was a pretty special day in my memory. It was not the only time J and I have been in the park in the spring. But it is the first time that I remember it. And yes the colors, the day, and the company were particularly wonderful. 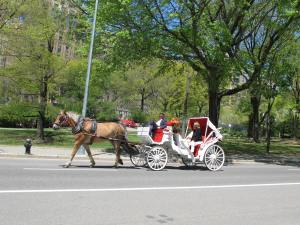 Quintessential New York, this surely beats a ride in a pedi-cab. The top hat is nice. But it’s still a business and not a show. So you see a lot of boredom. The driver’s done it. The horse knows the route. Ok, tips, but really, you the picture you see is better than the ride.

Ballpark With A View 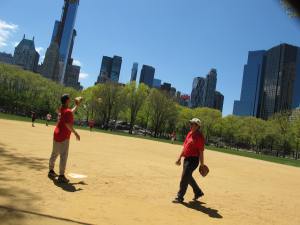 There is something fascinating about playing ball with the Manhattan skyline as a backdrop. I say again that shutter lag is a pain with a point and shoot. It means you need some patience to get the ball in your frame. It’s still a heck of view out to center field.

There are tulips and then there are tulips. The pattern of the petals was striking. It’s graphic art. It helped that the sun was bright. I know it’s high contrast and I should go in at high noon. I guess that if you follow the rule you don’t get this shot. The macro setting is really convenient. I suppose the DOF ruins the ‘bokeh’ for those knowing photographers. Hey, I like the shot.

What do you do if you’re a face painter and there’s no one about who wants one? Paint yourself. I guess it’s obvious. She’s good but I didn’t want my face painted. 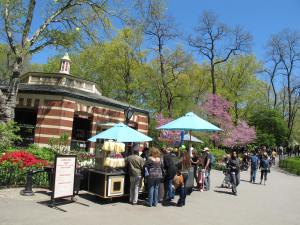 A great shot that I took many years ago was a close up of one of the carousel horses when we visited Disney. This time at the Central Park carousel I didn’t have a kid with me, so I didn’t enter the carousel. No horse shot. But outside the enclosure I got this munchkin. I only wonder why she was outside looking in? 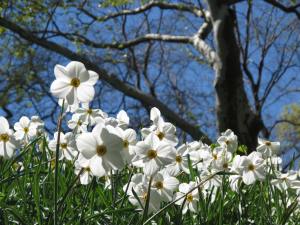 A low angle is always different. Most photographers like to shoot at eye level and never stoop to get a better angle. It’s harder for me to stoop these days. But here the hillside did the work for me. All I had to do was aim and shoot. I just love that blue-sky background. Of course it helps if there is one flower standing up to grab the show.

Here’s one that I haven’t seen before. Sure I’ve seen bubbles but this was humongous. Nice idea! So I’ve got a point and shoot camera with a little shutter lag trying to get this shot. It’s easier said than done. The artist said, “You can’t get a shot unless you put money in the jar. The bubble gods are fickle.” I finally coughed up a buck to get a staged shot. But this early shot was the one I edited and kept. I just love the creative ideas people come up with to entertain the passersby.

The flowers come out all along the branches. It’s a great color display. I got the sun into the shot unintentionally. I would say that it was planned but it would not be so. Still, the image is a keeper. 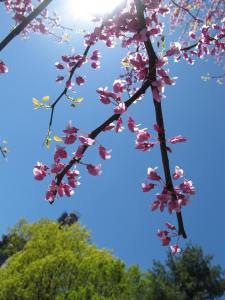 There is a spot in Central Park where there are some spectacular displays of tulips. It doesn’t appear every year. But this year they were in full splendor. And what is better than painters catching an artful interpretation of the display? So I ask why their easels were set up before the tulips and at the top of each easel was a picture (not this scene) from which they were referencing. Did I miss something? They are painting a picture in front of a real scene of beauty. Hey, it’s a way to go, I guess.

The cherry blossoms always stand out. It is hard to decide whether to go with a close up or get a view of the whole tree in bloom. Folks are all about getting shots of the color. Others are out to make a few dollars. I have lately been taking pictures of people taking pictures.

It’s all special because it happens for only a few short weeks. If you are lucky enough, you will be there to enjoy it.

The south entrance at Columbus Circle is my usual path into the park. There are always vendors of art and hot dogs. Lately there are pedi-cabs, which cost a pretty hefty price per minute. There are the horse drawn carriages. Yes, it’s a part of tourist New York. 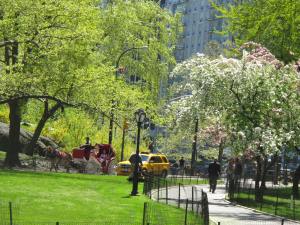 It’s only a few short weeks when the blossoms add their spectacular color in the spring.

Near the southeast corner of the park is a bridge often photographed. And it seems there’s always a Yankees fan always about.

The bridge as I said is a popular photograph. So I tried for something different. I didn’t know koi fish could winter in Central Park.

Every spring Central Park puts on a show of spring blossoms. It’s free. You just have to wander the paths. There are cherry blossoms, magnolias, forsythias, tulips, daffodils and so many other details for the pleasure of all who visit. Once and only once so far, did Julia accompany me. We wandered near and far across the park. It’s was a special day in my memory now. Hey I’m glad we got some quality time together.

There is a large lake upon which row boats are rented. People are constantly strolling the edges or picnicking along the banks. So, it’s a surprise to see an egret along the edge. If you can make it in New York, you’re tough. So this guy and I had a stare down. He didn’t back off. It’s a New York kind of attitude.

Look around and art is all around us. I love to see painters at work. Surprisingly there aren’t too many who sit and work in public places. Maybe I just don’t hang where there is a lot of inspiration. So it’s a pleasant encounter whenever I stumble across an artist at work.

I am reminded of an old joke that starts with: A male and a female statue were given the gift of life. They promptly disappeared into the bushes. Emerging, the male said to the female, “Again?” And she replied, “Yes, …but this time you hold it while I shit on it.” And, yes, even in Saudi Arabia, there are plenty of pigeons.

Each spring the blossoms put on quite a show. Some years are better than others. I have an especially soft spot for bright deep blue sky. And with this background the blossoms are just that much more dramatic. 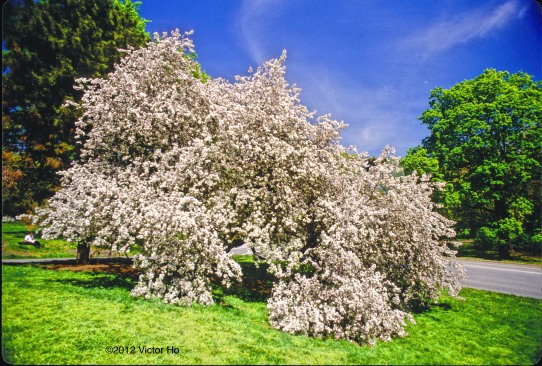 April 2001, Central Park. There are a few trees that are dependable subjects in the park in the spring. This year I have been past this tree several times and not noticed it. Usually this tree, laden in blossoms stops me. Sometimes things are remembered more vividly in your memory. Here’s proof that my memory still works. This tree is just not as spectacular this year.

Tulips, same day different tulip, come in all different colors around Central Park. Here I got one with more detail in the petals and used the shadow to highlight the center pistil. I wonder at the color pattern, which must look inviting to the bee that pollinates the flower. I imagine the pattern like landing lights guiding the plane into the runway at an airport.

In the spring tulips are dependable photographic subjects. For the most part I have tried it in every possible angle. The subject here was shot in Central Park and from a head on position to focus in on the center. I shot this with slide film. There is too much contrast to see the individual petals, which enhances the center.

In the spring for a short period, the blossoming trees are in full regalia. It only lasts for a short time until the rather plain trees take on their leafy green mantle for the summer. But for that brief time in the spring Central Park rocks.