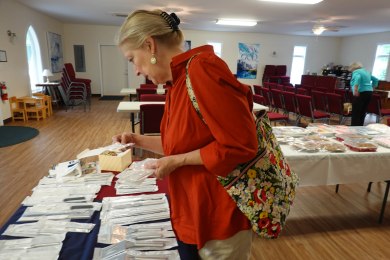 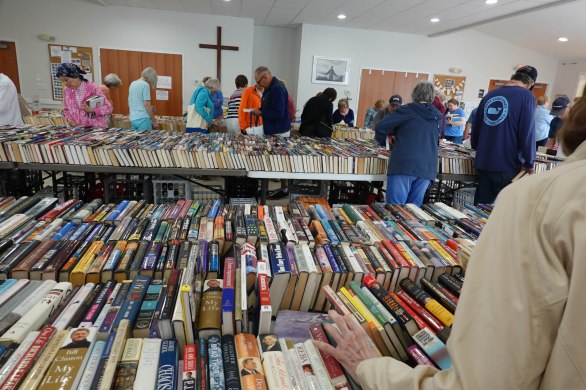 The same weekend: three bake sales and one art craft sale. There were two bake sales in two churches. One church was selling specialty knives in addition to baked goods. We got knives. Why? Don’t know. The second church sold books and baked goods. We got books. Six grandchildren all read. We don’t need books. But who can resist a book sale. The art was Delaware by hand and displayed the wares of craftsman from the area. We looked and admired. As expected, the price of handmade craft was expensive. In between we hit a yard sale. That was priceless. There was junk. Someone sold a Kitchen Aid mixer (not junk). Her neighbor dutifully handed over cash and the sale was done before our eyes. We bought a vintage baby buggy from the very same neighbor. Ok! I got another project to fix up. The last stop was the AARP scholarship show – craft, baked goods, and a farmer’s market with corn straight from Georgia. It was a packed day. 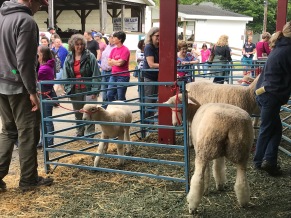 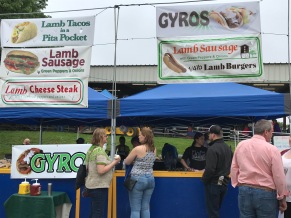 I actually had to pull these images off my iPhone. Per usual, I shoot an image with my camera. But I forgot…

Have I mentioned the Maryland Sheep and Wool Festival? It’s huge. Folks from far and wide come. Who knew? It’s like a cult. There are a lot of people who love sheep and wool. And they spin and weave and knit and…. I’m a bystander through association. I have a big camera and it seems not too many (big cameras) are in attendance. Sheep are photogenic? There is a building devoted to photography and there are prizes for your best sheep portrait. I’ll pass. But here we are. And I suddenly needed something to send to the kids. If you know my sense of humor… the sheep contest. The judge waxed poetic about fleece, bone structure, roundness, squareness and so many other attributes. Sorry. To me, a sheep is a sheep and they all look the same. Heresy!! Shoot me at dawn. All around me they sell sheep – meat – lamb and mutton. Gyros! You can’t have a proper one without lamb. The folks selling did not look Greek. I didn’t buy any. But I can’t help wondering what happens to the losers? My kids thought the joke was horrible. They have their mother’s sensibility in them. 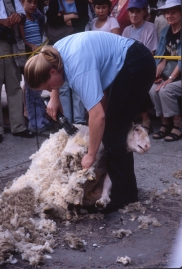 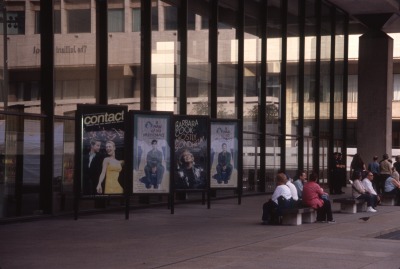 Old photos. I came across this. It’s about 2002, Lincoln Center. Barbara Cook – quite the diva. She’s starring. I didn’t know her at the time. About a decade later I discovered the American songbook. She’s a big part of it. Who knew? Lots of folks. I was late to the party. There was a craft fair that day I took this slide. Now that’s a full circle for me. Look! Sheep! A sheep shearing demo. Considering what I know about weaving, it’s odd to see that this image is in my files and I only just ran across it. How significant insignificant things seem on second look. History’s a funny thing. 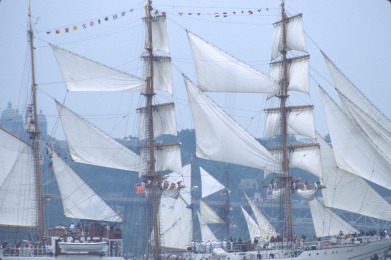 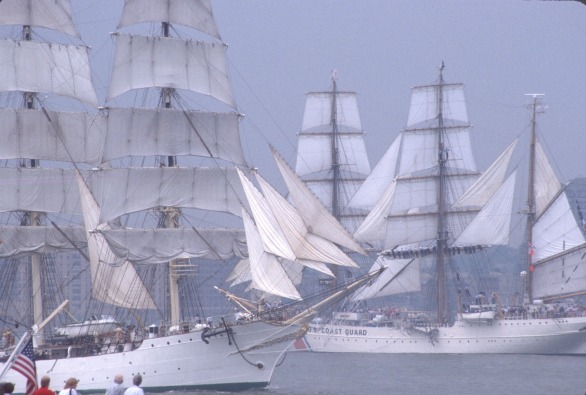 Sailing vessels paraded along the Hudson River in 1976, 1986, and in 2000. That’s my memory. In 1976 I was a newly minted surgery intern at Albert Einstein Medical School rotating out of the Lincoln Hospital ER. We were 24 hours on, 24 hours off. I started on July 1 – day off. That made July 4th my second day off. I was exhausted. Dead on my feet so to speak. The hours of an intern are severely restricted nowadays. Better or worse? I have an opinion. It doesn’t matter. I managed to drag myself to the Hudson that day with girlfriend and camera. Slide film. I had plenty with me. Someone standing next to me offered/asked to buy film when they ran out. Nothing doing. I needed/brought everything I had. This was historic. It was a once in a lifetime parade. So, of course, it wasn’t. As if NYC ever needed more tourists, they did it (tall ships) again and again. By 2000, I was a better photographer with more sleep and better (different) equipment. I was not on a ship but my lenses reached better. As summer days in NYC go, it was hazy. But I was part of history again that day. I’ve been fortunate that way. I could have been working July 4th, 1976 and missed it all. I wasn’t. I saw it from a front row spot. Lucky me. That year my vacation was the month of August. You had to take it when you were assigned. Lucky me. Nothing left to live for for the rest of the year. We went to Italy on a tour. I remember that too.

You take pictures of cats? Same principle – sheep. Eyes, it’s in the eyes. Focus. I’m tying up loose ends here. I just readjusted my DSLR camera to focus as I would like it to be. And it was largely more successful. These days I am so used to the point and shoot cameras that I don’t look in the view finder as much. It’s not laziness. I’ve gotten used to holding the camera at the level of my subject. This means that instead of bending I simply hold the camera lower and press the shutter. In a pen, this means I can get closer to the sheep without climbing in. if you recall, everything is related. Only the subjects change. The technique crosses over. So, I have been asked, how many pictures of sheep do I need. I’ve got one already. It’s like why I go to the movies. I’ve seen one already?

At least it’s not fish 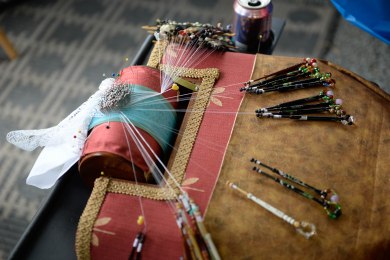 No, I’m not OCD. Am I? No matter. Here’s something you don’t see every day: Spinning in the park. Or, bobbin lace. It’s a craft not in much popularity. It’s intricate and fascinating. The artist said take all the pictures you want, just none of me. The sheep are trimmed and groomed for show. Why? The fleece is reduced to short fiber. The sheep sure look better. But then again maybe I forgot, they are destined to be eaten. Lamb burger? Gyro? 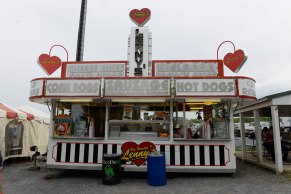 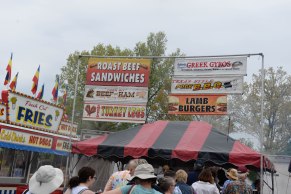 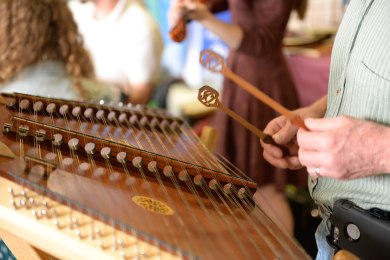 I just met this instrument again for the first time at a Celtic concert at our library. I have seen Maggie and her step puppets before. This time the instrument made more sense and had more meaning. It’s just time, experience, and a little percolation. It’s all cool. Maggie’s gadget synchronizes the step puppets to her music. Yup, she literally steps on a board and the puppet move to the time of her dulcimer. 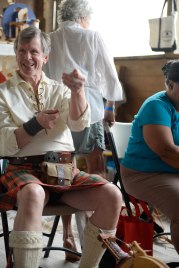 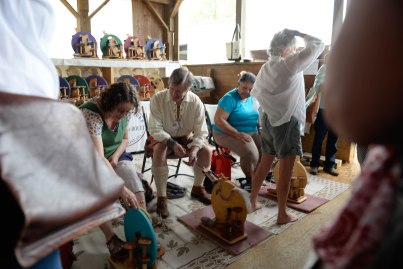 What does a Scotsman wear under his kilt? That is a classic question. More to the point is that it’s not natural for guys (to wear skirts). I’m not being sexist. This poor guy wears pants in normal life. His legs are naturally splayed. It’s a guy thing. Unfortunately, there was ample indication of what was under the kilt. A lady would never show. So I guess that part is sexist. I really don’t want to know the answer to this question. Nope, don’t. Please don’t tell me. 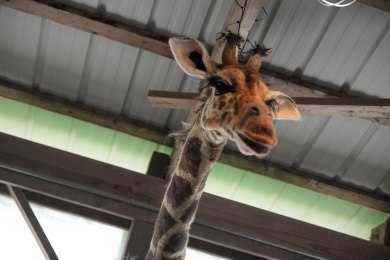 What’s felt? Well you have probably felt felt. It’s a soft material. The definition is more like: take some raw wool and put it under pressure and rub; the fibers will lock and form a sheet of material. Or you may use a needle to lock the material into shapes. How about a giraffe, or a dragon, or a heron? Yup, she did all of that and more. It was enormous 9as in more then 15 feet in size) and she demurred on how long it took to do the giraffe. I’d have lost interest long before the neck ever got done. Hey, it’s art! My (felt) hat’s off to you. 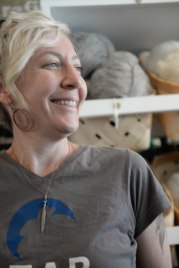 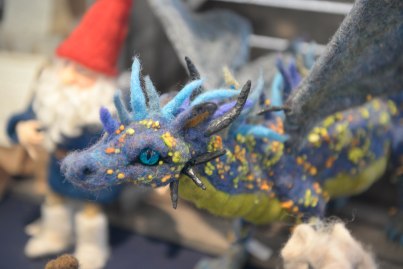 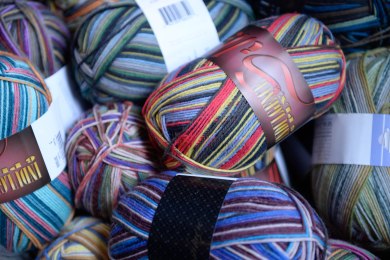 In order to get yarn you start with a sheared fleece. The fleece is washed. It’s turned into roving. Then, it’s spun. After that you knit or weave. If you skip the spinning, you can felt. Felt? The would be pressing the fibers together until they form a sheet of fiber all on their own. Like art, this is the raw material for creating a myriad of things. I’m more interested in the process than in creating art. People like came to buy the raw materials. Sometimes it’s the journey more than the destination. It’s all here. If you know fiber – ie spin and weave or knit – then you recognized the various states I mention. Otherwise, enjoy the patterns and color. 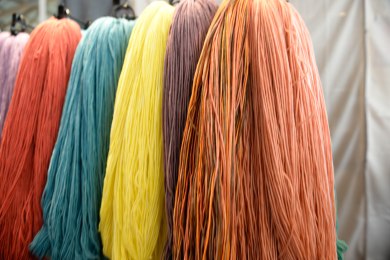 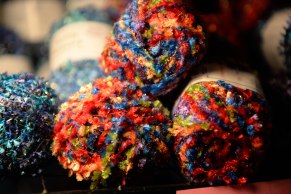 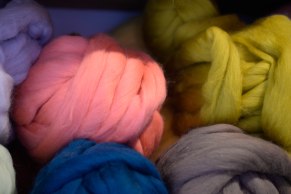