Imprisoned at the whim or will of the monarch, beheaded without trial, this fortress has a long sordid history. Sixty days to the election, I wonder how this post will look post election in December? Did we win or did the dark force prevail? I do hope our dear leader gets an orange jumpsuit. Maybe it’s time to bring back beheading?

In the middle of nowhere, again, here are a couple vintage London phone booths. How they got here, I do not know. They are worn and forlorn. Long ago they were quintessential London. I don’t even have a hard line phone any longer. Cell phone, it’s the only way to go. Video chat?

I’m starting a series of iconic images in my life and will continue for a few weeks in my posts. This blonde headed kid is one of my first street photography images. It was taken back in the ‘70’s. I’m kind of shy, really! So it’s not my first inclination to put my camera into someone’s face and shoot. We were at a street fair and this kid just presented himself, isolated in the crowd, just him and me. He’s got to be in his forties now. I wonder what he’s doing. This was one of the earliest street images for me. The other great source of images was New York City’s  street fairs, which were just beginning in the ‘70’s. Nowadays there’s a street fair every weekend and most times in multiple locations. Back then, it was a local merchants fair. But, London was among my earliest experiences.

Sometimes you don’t have the traditional monkey handy and available. Maybe the monkey had the day off. Wally and Smartie, are street performers, from the London street fair scene many years ago. Who was who? You don’t see folks much like that in New York. But then we have our own characters.

What do you say? – ‘A One Man Band!’ There is a lot to criticize about this photo and then there is the simple snapshot of it all. It was another photo from the London street scene. Johnny was there to earn a living and I sure hope he was successful. More than 30 years ago, I wish him well.

This is another outtake of photos from London street fairs. I had my favorite among my very early posts. (9/14/11) Here the color of the old slide has given a certain patina that my daughter recognizes on sight. Kids riding on Dad’s shoulders are easy targets. They are relatively immobile and they have an excellent uncluttered background.

In my early years with much less technical expertise, I shot a series of early street shots when I visited London. It should probably be in photocriticism.com my other blog. Notice the two monkeys, one parrot, and the smiling face. Of course you did, didn’t you? Maybe it’s not a great shot. But it did catch my eye and made me set it aside when editing recently. 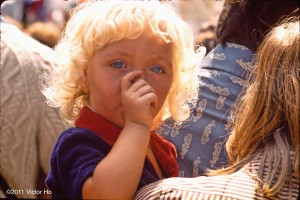 London, England. It was a long time ago. This kid is an adult with a beard and perhaps balding. But, who would disagree that this was an adorable child. I took this at a street fair completely random. It has remained a favorite of mine. Just another grab shot as they say.