It’s Lent. Mardi Gras has been done big in New Orleans for many years. What I did not know is that much of the material from the costumes and floats are stored and repurposed. So there are elaborate figures, animals, masks and such that are store in large warehouses until such time as they are used or retooled. Hey, I’m glad they recycle. And they also hold parties there. It’s quite something to walk around among all the colorful work.

This hot dog vendor is stationed in New Orleans. One thing that I can say about Saudi Arabia, it’s hard to come by a good ‘dog. The grocery sells something they call a hot dog. Even I haven’t been that hungry yet. They are an odd shape and color. And they come frozen. “Subway” (the sandwich place) sells them. They are split and put on a sandwich roll covered with cheese to which they then add all the condiments and vegetables. The kids eat them …ugh. In Maine they liked their hot dogs a bright unnaturally dyed red color…definitely bad for you. The thing is that I doubt that I will make it my business to get a ‘dog when I visit home soon.

This is the first President Bush when he addressed our national meeting in New Orleans. Have you wondered what out of office presidents do? They get a lot of money to speak… a lot. We had Gorbachov in the fall of 2004. The auditorium was packed and waiting when a member of the national neurosurgical leadership stood up. I thought he would announce the speaker. Instead he stated, “In the upcoming election Kerry and Edwards are against malpractice reform. Bush (Jr) will sign it.” End of statement and he sat down. Son of a gun, if that wasn’t a political endorsement! Bush Sr spoke some years before to our group. I guess you would have to be blind not to realize that the leadership is decidedly Republican. I’m agnostic but mostly not Republican. When George spoke, it was quite an experience. He spoke for an hour. It turned out to be a history lesson. He once spoke about how before he was president there was a Berlin Wall and after he became president there was no wall… as if he took down the wall himself. (See how this ties in with Gorbachov?) This speech he gave to our meeting was much the same. It was a rehash of his presidency. And at the 59th minute of his speech he remembered to say something relevant to neurosurgery. He said that he was planning to parachute jump from a plane and Barbara warned him that it wouldn’t be a good idea in a room full of neurosurgeons. Let’s hope he didn’t land on his head. For all the money he was paid you would at least have hoped for an original speech or even a new idea. And as for the rest, I don’t remember another word he said, it was so irrelevant.

New Orleans. This kid was mesmerized by the trumpet. The performer and audience were in the zone but perhaps not the same zone. I don’t know. It’s the lack of eye contact that got me. 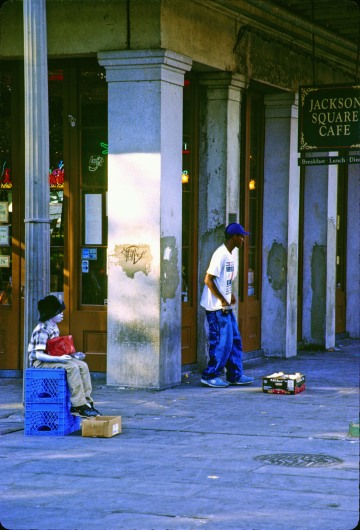 Street performers in New Orleans. Here’s a couple of performers who leave you with many questions. Are they working the same corner together? Do they even know each other? Or are they just ignoring one another while plying their craft. I vote for the kid. Everyone has a soft spot for kids. 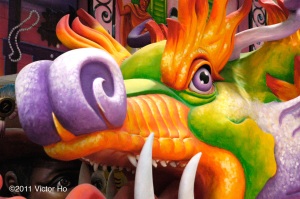 It’s New Orleans. There is a warehouse that hosts events and at the national meeting in 2005, I saw the figures that are part of the Mardi Gras parades. Several days later I was able to board a ferry and took a tour. There were many items stored and reused or repurposed as the themes would change from year to year.