It’s that same trip to Africa. We were camping. Gee, all the sudden I got camp memories. I’ve been a Boy Scout. Tent, no running water, no shower, open fire, sleeping bags… This was not too shabby at all. The tents had a floor and a cot and blankets and screens and a porch…. The Masai escorted us to and from the dining tent. In the dark it was a possibility to be attacked… by lions. Oh my! The morning we departed I shyly motioned for a picture. Soon enough these guys all rushed to be in the picture. All smiles and delighted to have their picture taken, I was surprised. I usually am not so straightforward to impose upon strangers. And their enthusiasm charmed me. I was searching for that African jump image. This smile one always brings a fond memory and smile to me. Yup, a highlight image! 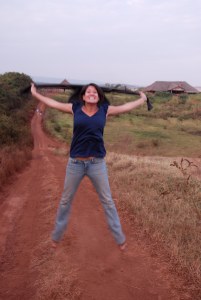 Jules had been in Africa teaching in a remote school in Namibia. It was the perfect excuse to visit Africa for the first time. It’s funny because we did not visit her in Namibia but instead were in Tanzania where she had not been either. She revived my memory of jumping. So good. On a hillside in the evening in remote Africa in a Children’s Village there we be and the moment is memorialized. 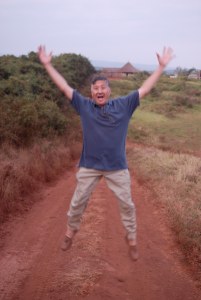 The old man can jump too. It took a few more years to realize that bending your knees makes for a much better jump effect. In fact it is only a recent realization when the kids were in Saudi in 2013. 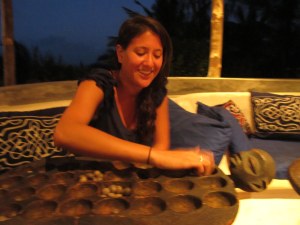 We (J and I) saw, learned, and played this game in Zanzibar. This is similar to the big one we bought. Mancala is another related game that is carried in some toy stores in the US. 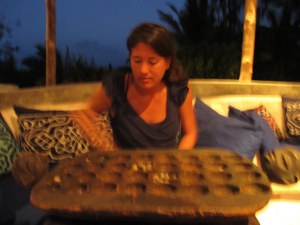 J has a smaller portable/travel version with her in LA. And it’s true they play this game fanatically in this area. There was a board inlaid into a table in our hotel room. We had just come from a spice tour where the local craftsman was adept at making purses, hats, and sunglasses. 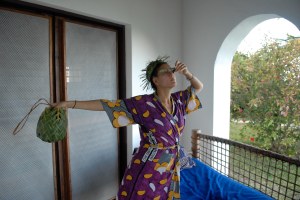 Our evenings were passed playing on rather large board in the lounge. It’s a milkshake, non alcoholic, because J didn’t want anything to deter her concentration. 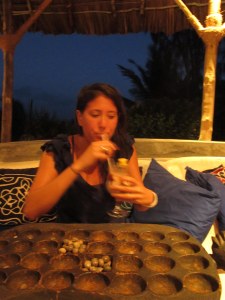 We even attracted an audience while we played in the airport lounge in Zanzibar. There was plenty of free advice on strategy. It was casual for J and me but, every move we made was breathlessly anticipated by our audience. Now I have to go back and refresh myself on the rules. But the memory of passing the time idly playing the game with my daughter….priceless! 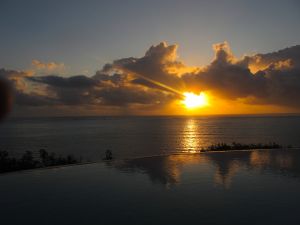 I am not an early morning person. Which is to say, that sunrise photos are few and far between in my portfolio. However, my calculations indicated that we were on a cliff facing east from our accommodation in Zanzibar. It was just step out of bed onto the walk and we were overlooking the ocean. So for several mornings the sunrise would awaken Julia and me. We would run out, shoot the sunrise, and then clamber back for another hour of sleep before breakfast. Yeah that’s about as easy as it gets. Oh, that’s the hotel’s infinity pool in the foreground. 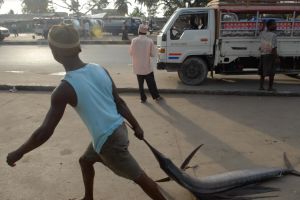 Stone Town. I reference my experience in the market in Zanzibar. It was early morning and before my daughter was up and about. So I took the big Nikon and wandered the market looking for images. Here goes a swordfish to market. It just didn’t seem right that it should be dragged along the street. I suppose if you don’t eat the skin then it’s all right. It was around this time that I began to shoot from the hip at wide angle without looking into the viewfinder to compose the shot. There are times when this really does work. All these years and I’m just now finding out it’s called street photography. 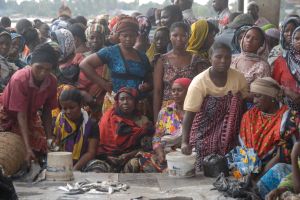 I can’t say how I came up with this idea. On my last day in Dar es Salaam, I was going to take a walk. The hotel told me that I mustn’t walk alone. I had already done this at the beginning of the trip (and survived). But heeding the warning now, I hired a car and driver. I asked him to take me to the local fish market. I had had some success in the market of Stone Town and figured I could kill a few hours before my flight. It turned out to be a great time. No one seemed to mind me wandering about. I got to shoot local people and get a sense of the daily life one does not ordinarily encounter.

I put together this landscape. It’s interesting enough to me because the main element is my family in lower right. We had stopped by this pond/lake and there were hippos in the water. It was a non-event. The hippos were just noses barely poking out from the surface. You don’t go close to hippos. They will kill you. They have skulls in which there are teeth that look like they were derived from a saber-toothed tiger. I didn’t know they were so dangerous. But they never let us get near. 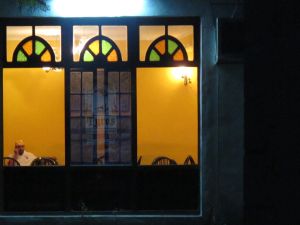 It used to be that after the sun went down, I would hardly take another shot until morning. Tungsten lighting, ASA/ISO speed, and a bunch of other reasons made it near to impossible to adjust. Now that white balance can be adjusted on the fly and IS0 can be made to almost see in the dark, it’s so easy to get night shots. Now the question is to see the image and then capture it. Like everything else sometimes you surprise even yourself. 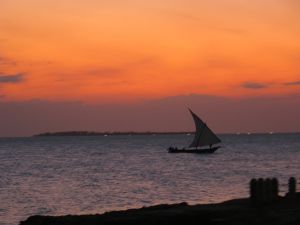 That’s a dhow in the picture. It’s sunset and I imagine that it is headed out to fish overnight. Otherwise how would the fish market be so full in the morning. Once again it is an opportunity that presented itself. I don’t otherwise bring along a tripod and sit and wait. I don’t have the inclination, patience, or the time. But every once in a while I happen to be in the right place at the right moment. 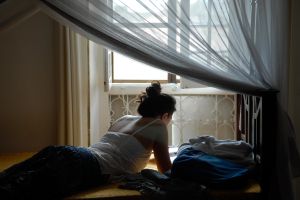 We arrived in Zanzibar and my daughter flopped onto the bed to read the guidebook and plot our next move. We were in Stone Town in a neighborhood where we had to abandon our vehicle and walk in among narrow alleys to reach our hotel. It made her a little nervous. Ok, so I was too. But as I have often said, window lighting is like a soft box. You can really get some nice images.