Too numerous to count, well, at least more than a few, I’ve posted up Nemo often. He’s a willing and ready subject. They hover around their anemone and defend it. So you know there’s a ready shot if you haven’t pressed the shutter in the last minute. In an hour dive I may make more than 100 images. So a second or two and I’m itching to find a subject. Ah!

Now for the next trick, try to capture Nemo with macro while he’s swimming. A neat trick! Its anemone was safety. So this little one stayed close. I shot a lot and came away with a couple.

Yes, I can… ‘cause I did. There’s some skill involved. But truth be told, there’s also a lot of luck. 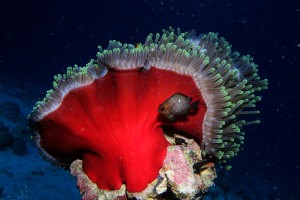 Graphical, colorful, dramatic lighting, it all is here in this image. The current was strong enough to make it difficult to hold one position to get this image. This is the same animal (anemone) which would be guarded by Nemo. In this case it is a black anemone fish. Yes, they hide behind anemone too. With the current blowing, it set up a dramatic shot with the anemone lifting her skirt. And, you peeked!

Eggs: and those are fish eyes. Yup. So, nature, in this case, decided that vision was critical to survival. Look inside the developing fish and it’s all eyes. 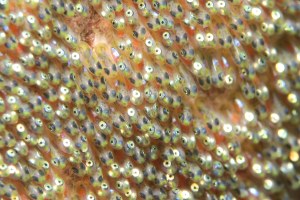 I imagined this shot. I looked for it. I wanted to take it. Oh, by the way, I’d like a mermaid too… a redheaded on named Ariel would do…But really, I was thinking this morning before we dove, I’d like to go back and see the fish eggs I saw the past two weeks and see the fish inside the eggs developed so I could get a picture with the fish not yet hatched. Wish! Granted! And I found it! Wow! Yes, another wow moment.

We were swimming by the anemone and as usual the Nemos were out front guarding. But there was something on the coral wall. Shiny, tiny, and being guarded too. I got a few shots. Got wide, got close, and shot detail. Amr swam past and signaled to move on. I grabbed his fin as he was leaving and pointed out this subject. He stopped, hovered, and started taking shots. He took my camera too. He was using wide angle and I had the macro lens ready to go. I got the same images. His are better. Credit: Amr. He keeps raising my bar. Note to self: Don’t give up on a subject till you get the image you seek. Macro subjects don’t move away fast. So work the subject, get a better image. Mine were lacking in focus and exposure. Decent but not like Amr shot. Darn, I want to get better in a hurry. But that’s the point, hurrying makes you miss.

The green are not fish eggs. My buddy told me it is an anemone. Beautiful! And the nudibranch – look at the serrations on the rhinopores. 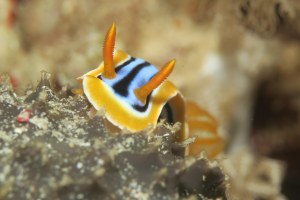 Ok, maybe you are not suitably impressed. But it sure is detail that I did not suspect till I got a real close up look. Yeah, I like to find new things and be impressed. I looked and I have more than 300 dives in this area – mostly on this reef. Many divers want to try something new, go somewhere different, see new stuff. Yes, me too. But I have to admit that I see new things all the time. If you have to be here, it’s not half bad.

I’m still treading water here… the wedding is done by the time this post is up. Now to edit a few pictures. Who knows the future? All I am reasonably sure about is that they are still married. Happily? So far!

Anemone and clown fish are symbiotic. It means that the fish is protected among the tentacles which are poisonous. And the fish chase off other fish who come round to annoy the anemone. Eat the fish I say. Then eat the anemone. It doesn’t work that way. The poison rubs off on the clown fish. So fish and anemone are symbiotic. Get it? The pictures show the mouth of the anemone? I don’t know.

Anyway it is usually not covered in gooey gel. This was odd. No one could tell me about the gel either. Some things you observe and then make up explanations in your mind. It’s kind of like religion. Nope, strike that. This is not a political blog.

I had the good fortune to dive with some serious underwater photographers. If the equipment is an indicator, they used some very costly stuff. The DSLR body, lens, close up lens, lights, modeling light, monster pod, waterproof case with air leak indicator… well it’s enough to make me feel completely inadequate. Say it must be about $10k worth of gear. Seawater is unforgiving. I have fried two cameras in the past. Fortunately it was not expensive gear. But it hurt to lose a camera. Well I was on a reef safari with four photographers, one with video, and all with external strobes. For a gearhead comparison think Volkswagen compared to Porsche. I had the VW. This group had varying tastes in subject matter. Some things I never pass by and I always photograph, seemed not to interest them.

So it was with interest as one found an anemone floating free at about 80 feet. Color is an issue at this depth. Red is almost gone. A flash would definitely help. I didn’t use one – just white balanced and let my camera go on autopilot. And so there were four photographers clustered around this fairly nondescript subject. It must be special but I have no real frame of reference. I hung on the edges having taken my shots. Then I decided that the quintessential shot here would be the gear in play. I sure don’t do any set up this complicated in life on the land. Trust me this is some seriously expensive gear. I will admit to being strictly amateur. I have a different level of interest here.

This is the animal that symbiotically protects the clownfish, ‘Nemo.’ I sometimes see the backside, behind the tentacles. The image that I got was a surprise when I enlarged it. First of all the backside is a deep rich red color. And there on the surface were two strange fish, not Nemos. You see the tentacles of the anemone. But the fish were kind of spooky just stuck there. They were not swimming by and they were not expected. I have this happen a lot. You never quite know what you have until you get it up on the computer screen. 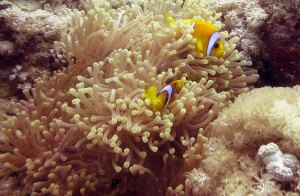 The clownfish and anemone are symbiotically linked. I didn’t realize that the anemone is an animal and it has a significant sting until I began to read about them. Also I’m used to seeing one type of anemone with closely arranged tentacles.

And there’s a mouth. Ok I haven’t been paying attention. The longer tentacle and less neat looking anemone is less common. But since I’m looking for it now, I see it more frequently.

But what I usually see is always worth a photo stop.