This was the first spring when Lisa and I started dating. I took her to Astoria Park. This photo was taken on Triborough Bridge when David and I recently rode across on bikes. The Hellgate bridge approach is in the background. The empty pool is four times the size of an Olympic 50 meter pool with a blue diving pool at the right. And in the park to the right of the pool is where Lisa and I spent a memorable afternoon just happy to be in one another’s company. It didn’t much matter where we were; it could have been anywhere. She had just cut her hair short – not my preference – but that didn’t matter either. As you can see we horsed around the park, went up and down on the see-saw and generally recaptured the days of childhood in the park. It was truly a day of innocent fun. 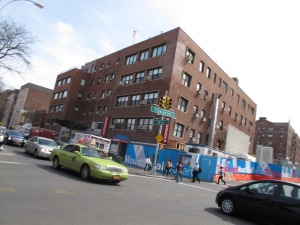 The IRS now tracks social media and will tax you for things such as: you took your girl friend to Tahiti on your facebook page and you claimed you were unemployed. This ties in to me in that I can’t be in America for very long. Don’t worry, this was a very brief visit. It was jam packed with activity. I was in all five boroughs, on foot, by car, and by bicycle. David and I rode bikes and saw pretty much all the bridges to Manhattan. We rode or walked over several of them. So here we are in Astoria, Queens.

We’re on our way to the 59th Street Bridge. Yes, yes, that 59th Street Bridge from the Simon and Garfunkel song. And, of course, we were riding randomly through Astoria. I had just seen the Astoria pool, where I swam as a youth. There! On the corner is a small and old hospital. It fit the description of my memory. I was born in this hospital! It was Astoria General renamed in 1949 by doctors who ran it. Since then it has been bought and renamed under the Mount Sinai logo. Either way it’s still a tiny hospital. What the general public doesn’t know is that it’s not very good. Well, in fact, the reviews online are not complementary. I guess it cuts both ways. What I know now is that this is a hospital I would avoid in real life given what I know as a surgeon. Not only was I born here but one of my younger brothers was born here also. The family doctor was Elias Levine. For all I know he delivered me too. Serendipitous find just before my birthday? Hey, life’s funny that way.