The bird feeders were moved to the front balcony to get them away from the squirrels. It took a week, then, the squirrels found them and climbed to the balcony. Great! Just great! Willow got into the habit of climbing to the rail. Actually, he jumps up to the rail. One bright sunny day in the spring – this spring – everyone (cats) was sunning on the balcony. After the cats were in we did the routine ‘cat count.’ No Willow. I did another visual sweep of the balcony. No Willow. On the back deck through the locked door, sat Willow, peering in, calm as punch. Apparently, Willow had jumped off the front balcony and come around to the back steps, leaped the gate, and returned home. The concept of front and back of the house was familiar to Willow. He’d only yesterday gone over the gate (leaped) to explore the wide world. This information proved key to his return. Smart cat. Colleen nearly had a heart attack. And, I don’t know how we can let Willow out to sun on the deck again. 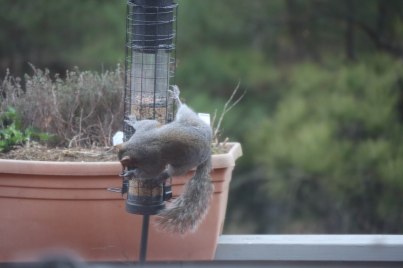 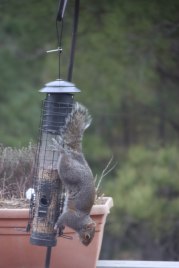 I like their persistence. Mr. Squirrel has not figured out how to defeat the bird feeder yet. (The cage drops down over the feeder holes.) And, the cats would dearly love to play. In this case everyone goes away without what they want. I’m not ready to feed the squirrel and the cats won’t get a squirrel either. The little birdies win, I think. 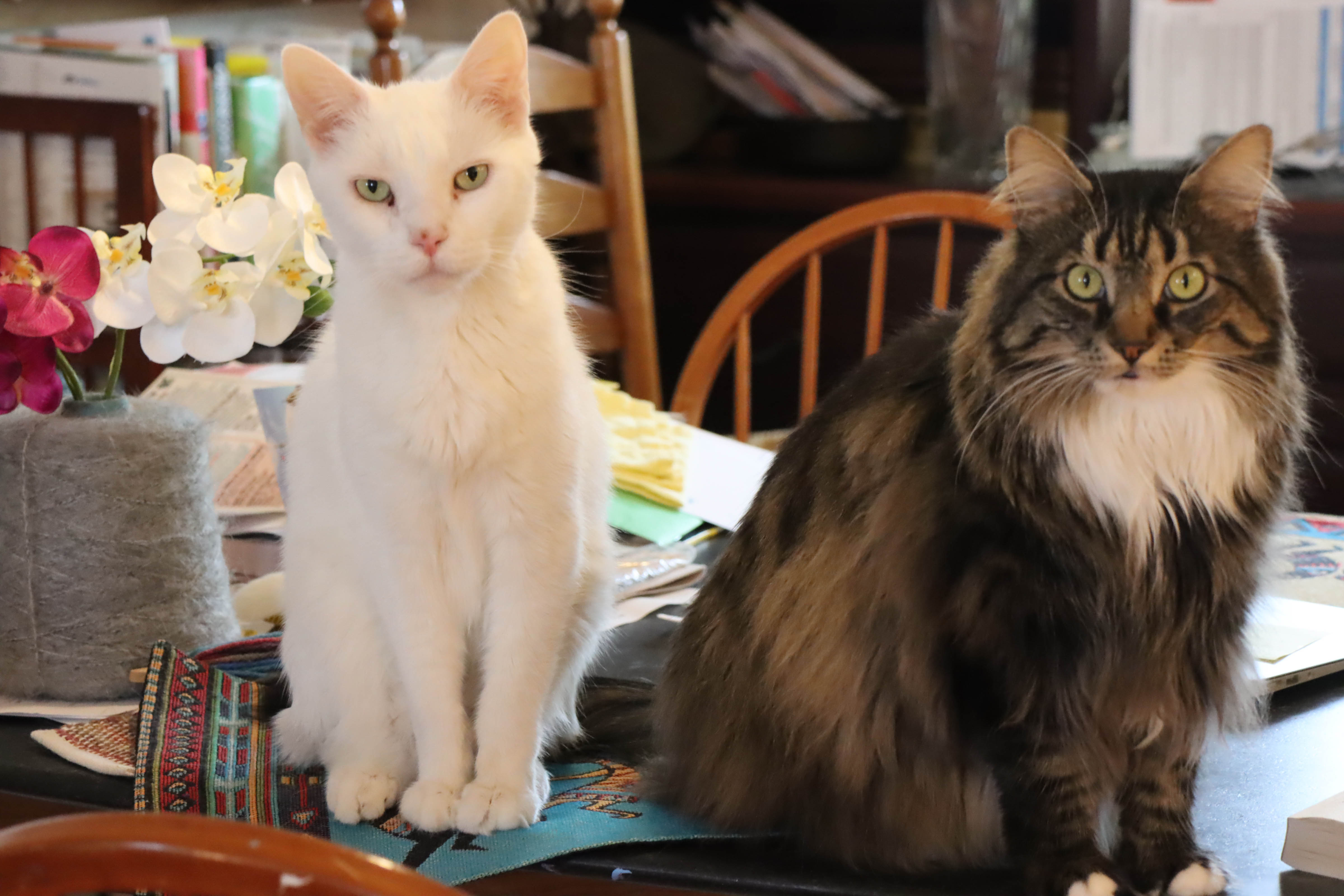 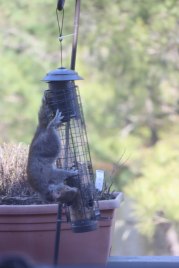 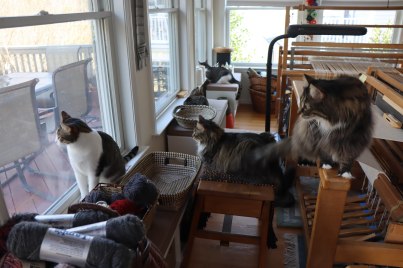 We bought a squirrel proof bird feeder. It cost $$. Why don’t I want to feed squirrels too? I would have bought a squirrel feeder. The feeder was squirrel free until today. And it works. There is a cage that closes over the holes when the squirrel’s weight is on it. The squirrel was getting something, but not an entire meal. Seeds spilled. Some, including the squirrel buddy, chose the easier way to go, on the deck. At least in this exchange the birds get a higher percentage on the deal. 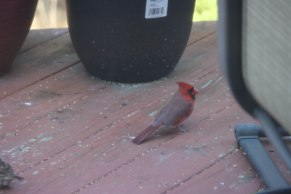 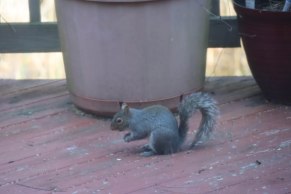 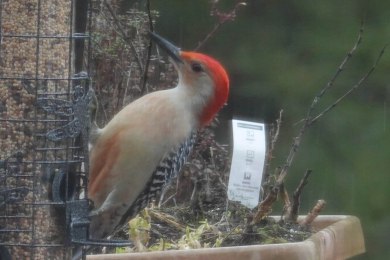 I am limited by technology and laziness. We have a birdfeeder. It has not been particularly productive to see many interesting birds this year. Mostly it has been LBJ’s. It’s term Colleen uses. Her mother used it before her and it does not mean LBJ, the president. It’s “little brown jobs.” I did not bother (lazy) to remove the window screen this year. Then, a cardinal – male and female – and a woodpecker showed up. My bad, there is definite image degradation due to the window screen. And I was further limited by the camera at hand. The lens was simply not strong enough to pull in the bird. The little image in the corner was due to the limited (Canon) lens. Even at 150mm the bird was tiny in the image. The electronic (Sony) telephoto did a much nicer job. Both camera’s images were degraded by the (window) screen. But, as always there is something to see. Any camera is better than none. Otherwise, this would not be an illustrated post. 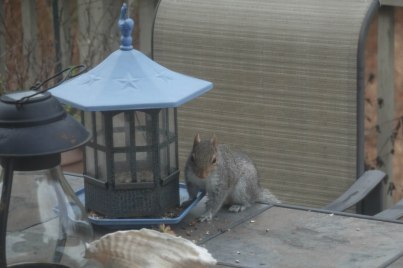 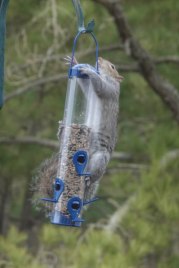 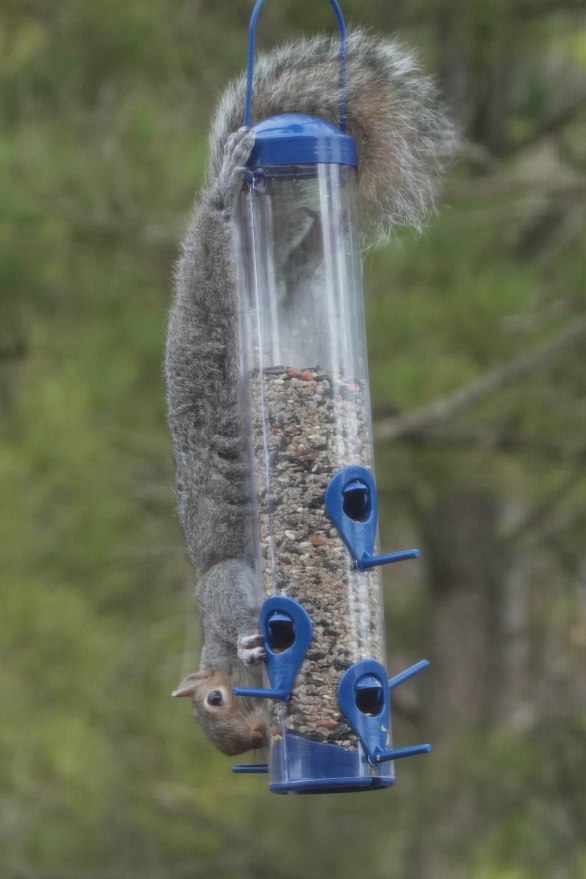 I got squirrels. Look on YouTube. There are hilarious videos of ways to combat squirrels at the feeder. The poor birds? Hey! Squirrels gotta eat too! …unless your wife thinks squirrels are furry rats. You can see two feeders. The first was like a buffet. The squirrels were putting on weight! The second, a cheap plastic, device was so flimsy it was destroyed in a day. The squirrels destroyed it in a day! Destroyed! In a day! So, I broke down. …. Birds gotta eat. The new feeder has stopped the squirrels. So, there’s no pic. Ha ha. No squirrels. There’s/that’s not a pic. 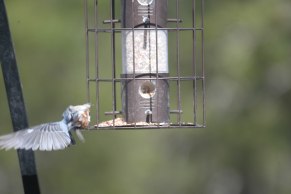 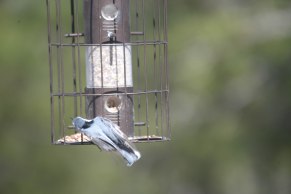 At the birdfeeder the photo ops are limited. A few species enjoy feeding. They are eating not posing for me. I don’t get much action. I do get an occasional action shot. Can you say abstract art?

Cardinal at our feeder 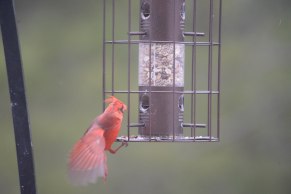 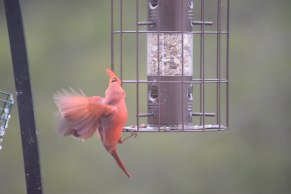 This bright feathered feeder was posing for me. I got the requisite catalog shots. Then the action started. He flitted to and fro. I got my shots. Action is hard. I have told you that a motor drive will not ensure a good action shot. It’ timing and luck. Mostly luck. Have I mentioned that I am a lucky guy. 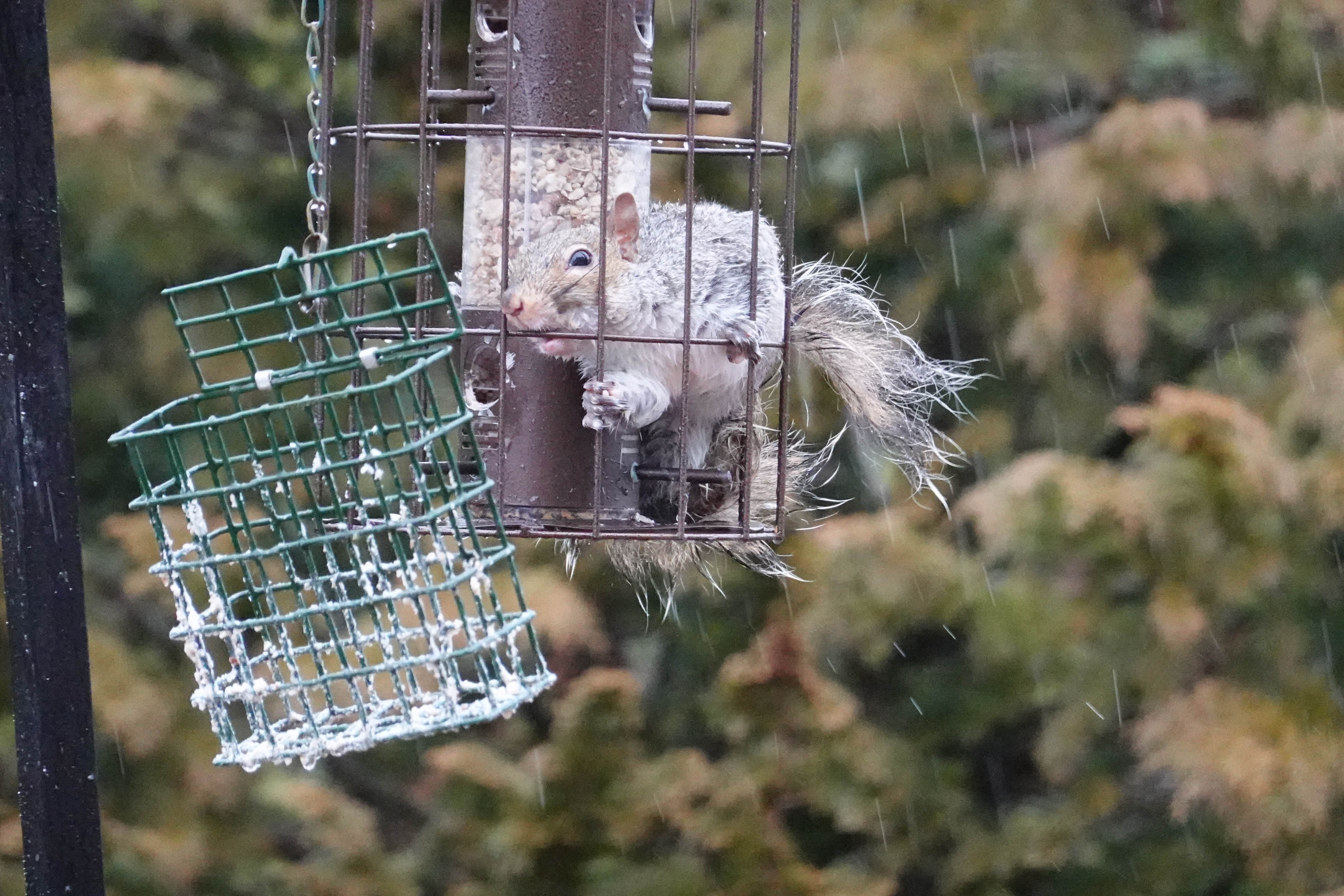 The squirrel returns. Hey! It could be a movie. Squirrels gotta eat! This one came back to the feeder. He was caught in the rain. His coat and tail were soaked. The poor guy was about as frightened as could be when I confronted him. He was so fat from feeding that he had trouble escaping the cage. Off he ran. Good riddance? Nope he was back again a day or two later. It’s never done. 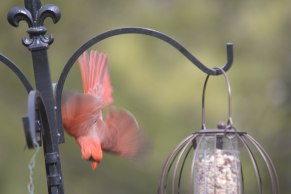 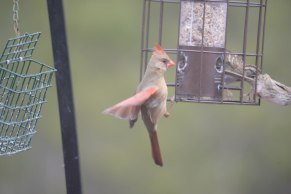 All in one day and at the same time, it was unusual to see. Both were there. And I was able to get a shot of them. Birds, fish, cats, oh my! It was nice to capture the images. Action. It’s fortuitous. Patience. The skill is there. The circumstance is a bit of luck.

Mother is the invention… 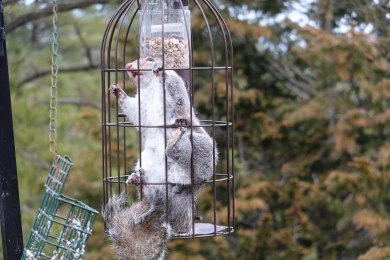 Ha ha, you might remember: Necessity is the mother of invention. But then, what do squirrels know? Look up youtube and you will see the mothers of all devices that attempt to prevent squirrels from eating at bird feeders. We got a feeder as a gift at Christmas. It took about a week for birds to discover it. That long?! A squirrel came by once and soon left. Ah! The cage works! Nah! Today the little rodent was inside the cage munching the snack mix. He’d already eaten the suet packages – one at a time on two consecutive days. I daresay he was so plump that he had difficulty escaping the bars when I confronted him directly. Just tapping my window pane drew only a sneer: come get me if you will. Now it’s full on war! Grease won’t work. Been there done that… 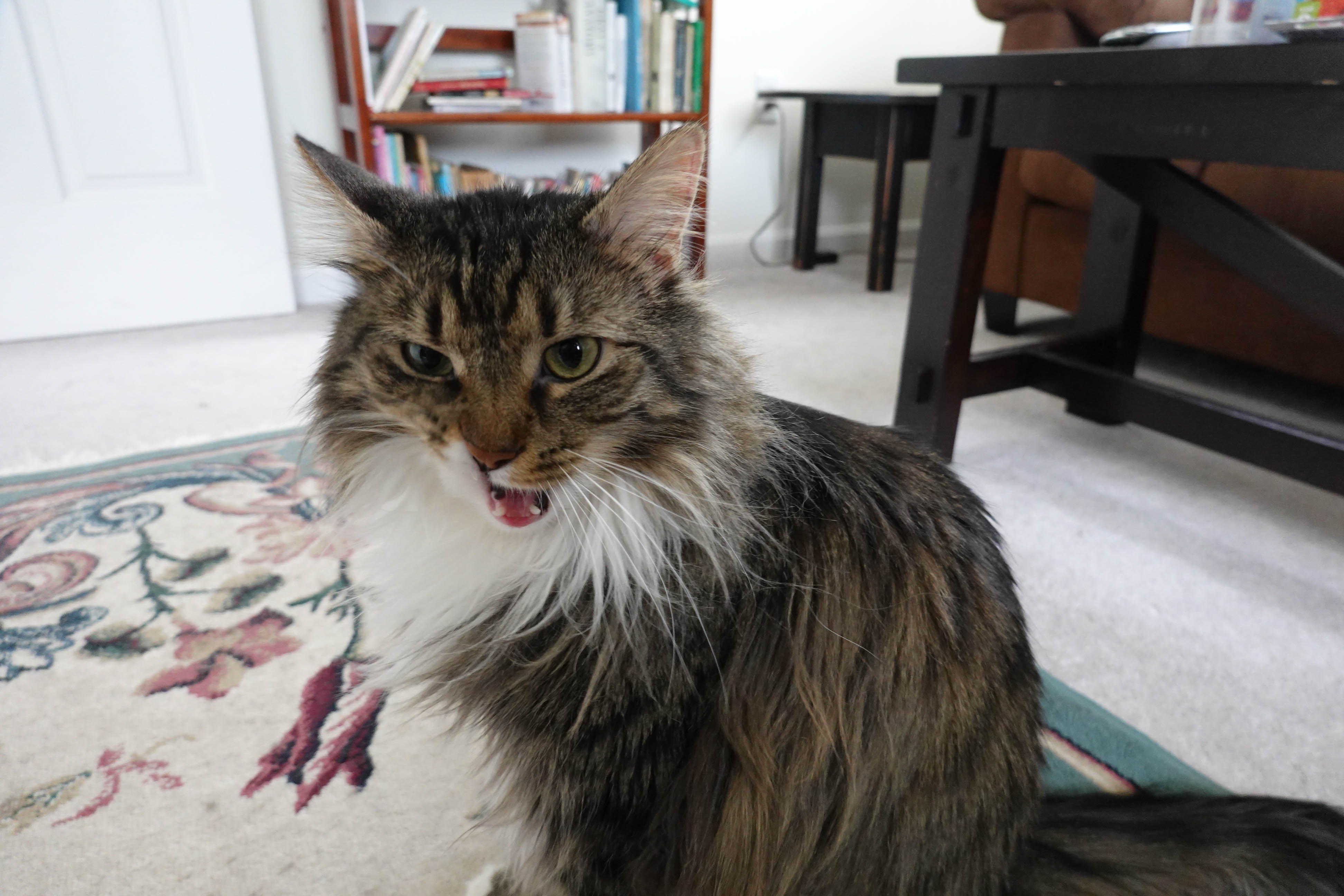 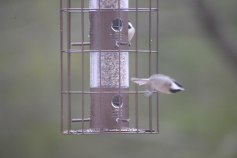 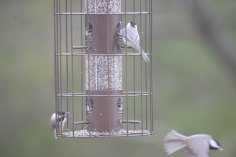 By the time I get this post out, it will be winter into spring. Ha ha! We got a bird feeder. And now my cats gather to watch. They are mesmerized. They stare, sometimes in pairs, sometimes singly. The birds don’t mind. They are hungry and protected by the glass panes. No squirrels allowed! One finally found the feeder, made an attempt to eat, and then bounded away never to be seen again. The anti-squirrel cage works… for now. Why not feed the squirrels? We do it at the park. They are rodents in the rat and mouse family. At the house no! In the park, maybe? 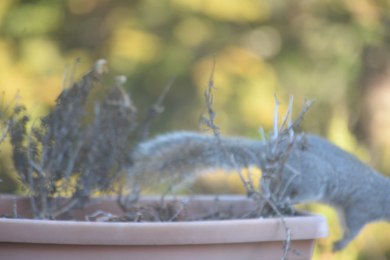 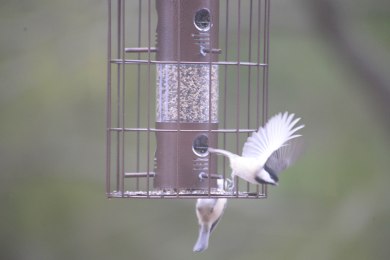 It’s been quite some time that I photographed a bird feeder. We got one as a gift for Xmas. The first week there was nary a bird. They had not found it. Somehow, they do, but it took a long time. I’m not too patient. Ha! And now the hard part, decent pictures. It’s a work in progress. I got one doing a chin-up, and another in flight, and finally a perched bird ready to fly. There was a woodpecker. Alas no decent picture. Eventually… 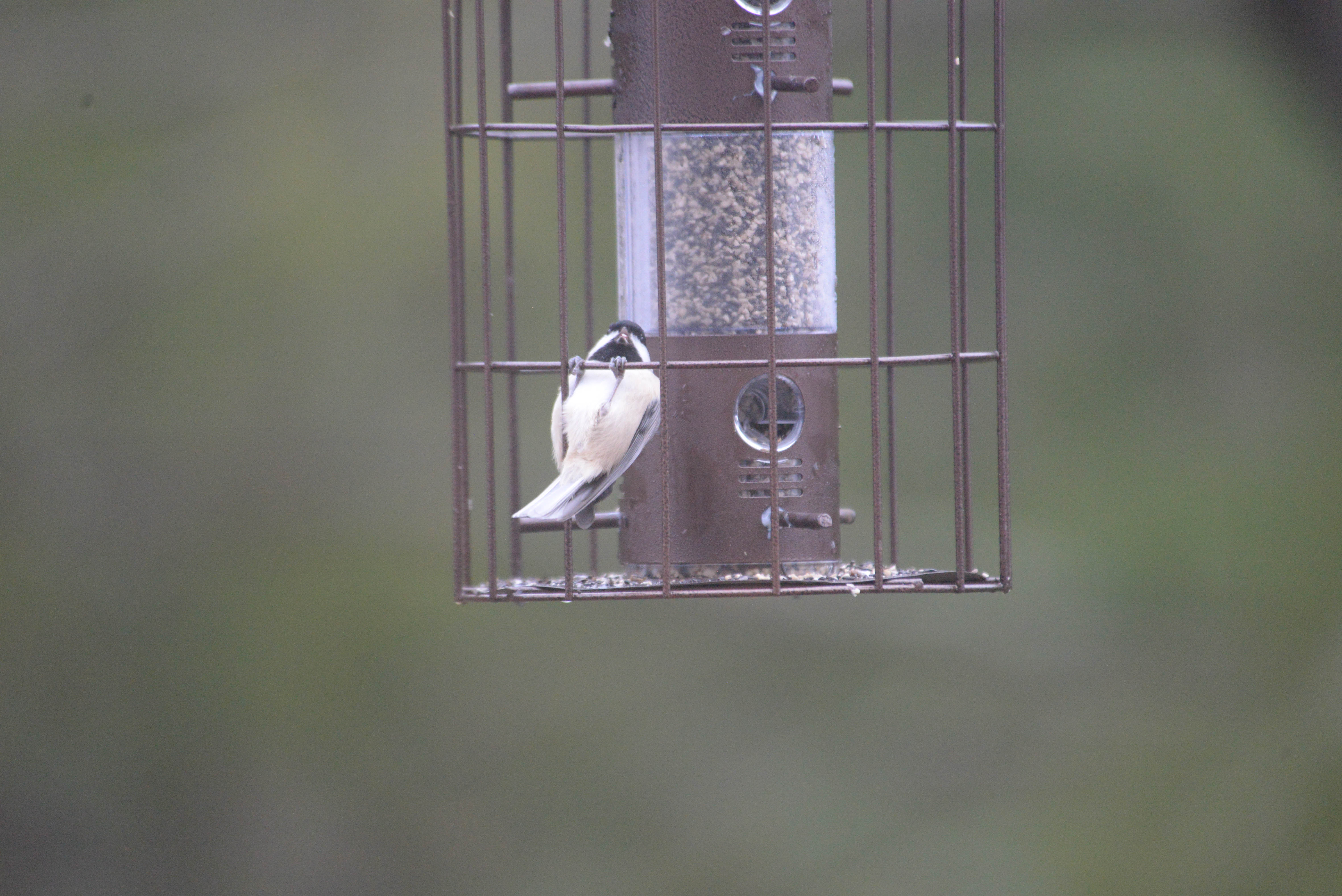