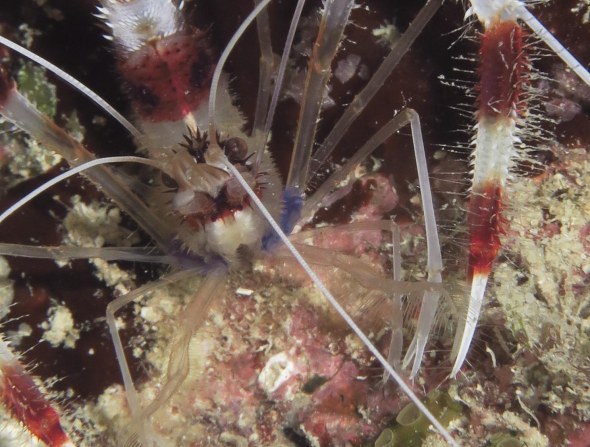 If you look closely, real close, it has the face of a lion. Now I did not notice this before. But then again I don’t get very close to boxer shrimp. I would, but, they don’t let me. Not enough interest to be a meal. And I don’t much like shrimp too much. They have lone antennae. Way long! Really long! Long enough that I don’t try to show you the whole antenna or the shrimp would be too small in the picture. And if you get in close, here’s what I noticed. It looks like four antennae are sprouting. And the eyes are small. So, perhaps, that is why the antennae as a warning sign. And then the face. “It’s a face only a mother could love.” It has nothing redeeming except that if I were designing a horror movie mask, I would start here. Oh, three claws on the one side. Smaller ones. Functional? The details I see as I get closer and closer… I learn something new all the time. It’s really nice to keep finding out new things. But if I had the six lottery numbers…. 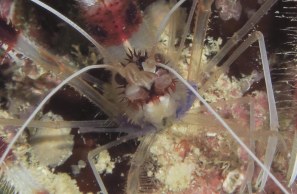 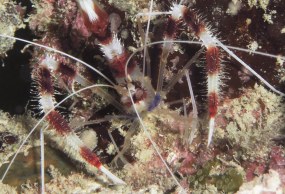 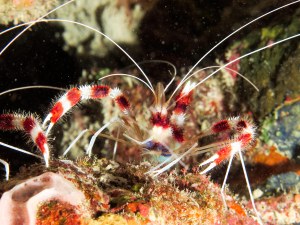 Night dive. Told you, they are fun. These colorful guys are attractive snacks so they stay hidden. Well I wouldn’t know. They seem to be all shell to me. But they are impressive. Of course the veteran divers are pretty blasé about it. To me they are still a thrill. But I’ve shot a lot of them too. Still, I’m excited because they are not easy to spot and hard enough to shoot. No, they are not snack material for me. 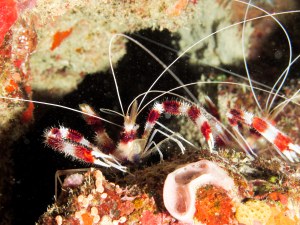 I couldn’t resist another shot posted. There’s a lot of color and the antennae are striking. My ability to get a close up does not permit an eyeball view. I live within the limits of my gear. It’s pretty neat anyway. 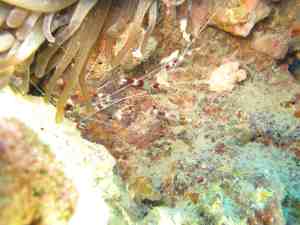 We were swimming along the reef in a group. I saw an anemone. They are always good for a shot or two to catch the guarding clownfish. It turns out they were guarding more than the anemone. I spied the antennae. Aha! Boxer shrimp. Two! Now to get a shot… The clownfish made life hell. They kept swimming into my shot. And the boxers were shy. But there was a little trick. The other side of the coral had a hole. So as the boxers retreated I could poke the other side and they would reappear. Nice! I got a few nice shots. This just illustrates that there were two and the anemone was just to the left in the image. 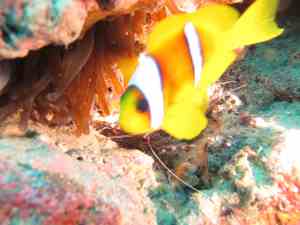 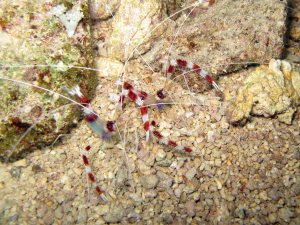 Our night dive was going slowly. Then Farid stopped and pointed at a common urchin on the seabed. But his pointer led me to two boxer shrimp lying in the shadow of the urchin. I guess they use the urchin as sort of a symbiotic protector. 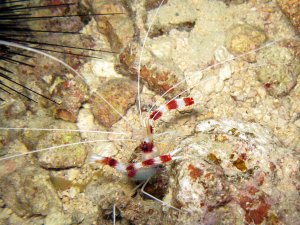 Having been stung by an urchin I am most certainly careful not to ever go near an urchin. Not one but two shrimp were there! And they were lazy. I swam in close and used my flash and they hardly budged. The antennae stick out a long way. The bodies are small and hardly make a bite. I was just so happy to catch them in the open. 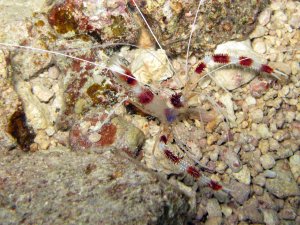 After so many dives you live for these rare special moments. They don’t come often.

Sometimes You Don’t Get What You Want 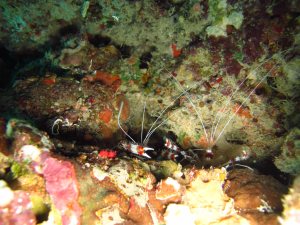 Hey! I found this pair all by myself. Boxer shrimp are really best found at night. They come out from their place deep in the coral. It was daylight and the antennae reflected against the dark hole in the coral formation. Now to get a shot…no dice I couldn’t get close. I got my flash exposure and one image. There are two of them. It would have been a nice shot. It is one that got away. And no I did not disturb the wildlife. I did get a shot of a boxer shrimp on another night dive. So the adventure continues. The nice thing about coming here so many times is that the urgency to get a shot is tempered by the fact that things go in cycles. Eventually things will reveal themselves. Be patient. 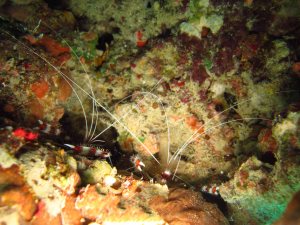 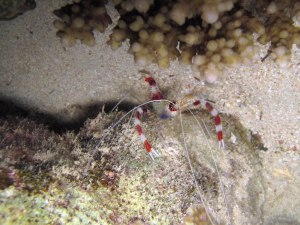 I found this one. I was following my dive buddy to shallower water. The long antennae are the tipoff. They reflect the flashlight. You may shoot a series and only one shot will do. Fortunately the shrimp was cooperative and I got this with the claws open.