Ok, here’s a good one. David started at a shop that did kids haircuts. They charged… a lot. He eventually switched over to a regular barber close to home. They were a group of old guys. David was well behaved and he was rewarded with a lollypop after each cut. His sister accompanied him and she got one too. Then came the time that I was the adult who took him for a cut. The barber handed him one lollypop afterward. And he gave David a second one for his sister. David immediately popped both into his mouth. He responded to my question, “Jules will never know.” Who teaches that kind of logic? 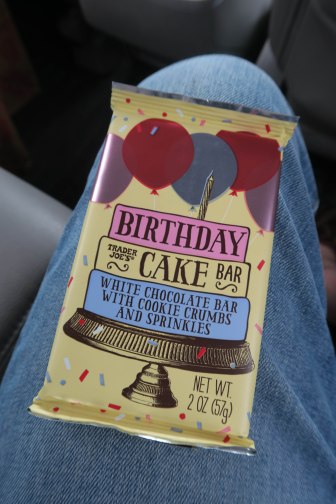 I am notoriously difficult to shop for. After all I have largely gone and gotten whatever I needed. I don’t lust – much – for things, silly. I don’t ask for and I protest when someone wants to get me a present. So I’m pretty ok without any Xmas or birthday gifts anymore. Really! So?! This was the sole present of my recent HB. White chocolate! Mmmmm, no, I’m not much of a white chocolate fan. Go for the sin if you are going to do it. Get dark chocolate! Nonetheless, it occurs to me now that it was the one and only. Thank you. Worse, I took a picture of it. Yeah, I shoot everything.