Colorful and relatively plentiful – when we dove the Channel Islands, J and I found many of these colorful nudibranch. They are small, no more than an inch long. The water is deceptively cloudy and dark, enough to push the ISO to 1600. We saw them and got a number of shots but few were really good. J got one and I consider it to be the best of the day for this nudibranch. There are red horns and blue horns at the head. She nailed the shot. I’m very happy she shared this with me.

I got the names from the all knowing internet. It wasn’t easy. My search terms for fish of the Channel Islands left me empty. The rose anemone looks like and anemone of the Red Sea except the color is bright red. And it doesn’t seem to have a center. Hmmmm?

It also says that this is a bat star. Whatever! What I was looking for was the name of this last animal. It’s a large sea hare. Impressive! I’m used to seeing small nudibranch, about an inch or so. I looked under sea cucumber and sea slug. Nope, nudibranch – large. I hope you appreciate that there were lots of them in the open on the sea floor… so I’m telling you. And then there was this pair. If I had to guess they were bumpin’ and rubbin’ probably means procreating? 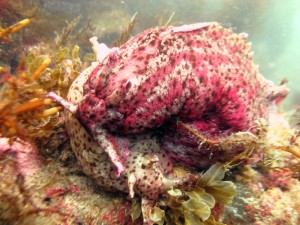 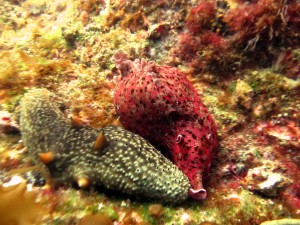 Well that’s my guess and I’m sticking with it. That’s different in my book of things I saw that day. Something else I didn’t expect was J playing with the wildlife. I’ve been admonished by the kids often enough that I don’t touch things (except when they’re not looking). 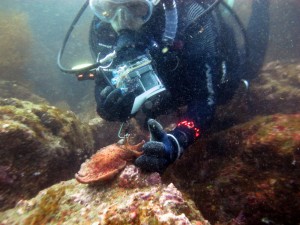 “Wake up and smell the coffee.” I think that here it refers to suddenly realizing that what you were looking at is not the point of the picture. I got a great shot of the urchin, colorful, composed, and there’s a resting fish in the background. That wiry barbed plant life in the foreground and all around are really brittle stars. Never saw one before so I didn’t have a clue… J got the shot and later someone told her about them. (I was still seasick on board.) Me? I never did get a single decent shot. It’s lucky for me that she noticed they were moving unnaturally against the current. Now that I know what I’m looking at, it’s a bit spooky. Credit J on this splendid shot.

Too Colorful to Eat 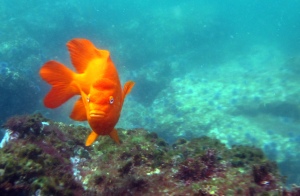 One thing everyone tells me is that colorful fish are, for a reason. Maybe fish don’t have the same visual receptive spectrum as me. After all at depths below 30 feet the reds disappear. So like a fire engine red sports car just screams, “Look at me go, give me a ticket!” a bright orange fish would seem like a tasty morsel. No one explained. But I’d pass if I were a predator. If it looks too good to be true, it probably is. It’s called a garibaldi. 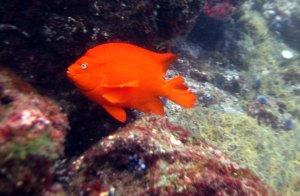