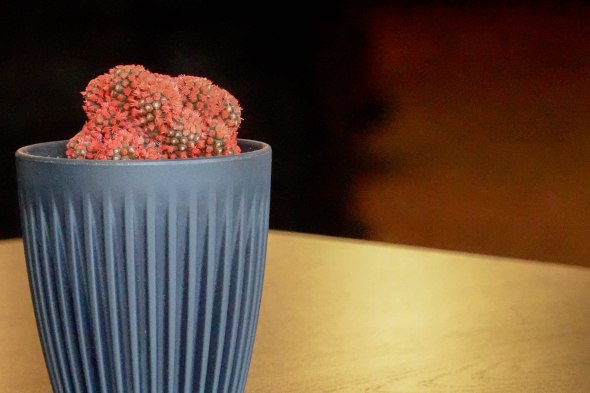 We were stopped in a coffee shop Colleen adores. Turmeric latte. What can I say? It’s good for you/her. I deferred. I sat and took in the ambiance. We were also here for the ambiance. A graphic image caught my attention. Drat! I almost had a great shot. It’s okay but it could have used a bit better focus.

Meanwhile, I noticed a family moving about, ordering, and eating. It took me a while longer to realize that there was a sleeping child on the table. I mistook the shoes for mittens and hats. There were two kids not one. Consider it an optical delusion. 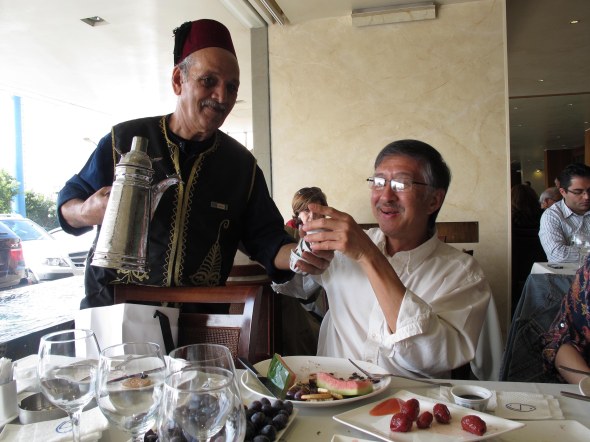 It’s too dangerous to go there now? The road to the airport was blown up shortly after Farid (orthopedics) traveled on it. And the window in Rida’s (ophthalmology) place were blown out by a bomb nearby. Farid goes there all the time. His family spends their summers there.

Back in 2013 my good friend Farid invited me to Lebanon. There was a wedding. I had not been invited to the wedding. It seems that invitation was optional. One of our Jeddah OR nurses was getting married. It seems there was a sort of open invitation. Farid was just there on scheduled vacation. He invited me to go. Okay? Why not? The wedding is a couple posts later. Meanwhile I stayed in a couple places.

The downtown apartment house of his mother’s had seen war. Yup. Bullet holes. Those are in the wall next to the bathroom. I showered there. It’s not every day you have bullet holes with your shower. We ate at a local fish place. I’m not a big fish eater. But the dessert was fruit – strawberries, grapes, watermelon….and Arabic coffee. The server saw me with my camera. He posed and we got a picture. Thanks. That was a happy ending…

Which came first? The chicken or the egg? I confess that now when I dive I compose a post to go along with the fish I shoot (images of). 99% never make it to post. Forgot. Too many images and only one post a day. I don’t try to do more. It’s TMI. And besides, who’s looking? Thank you to you kind readers who put up with me.

This mundane photo is like Proust’s Madeleine. It’s a BLT. Uniquely of my childhood. And beside it is a latte. Uniquely of my past two years. The BLT was in my life from childhood. My mother made them. Bacon was ok to eat then. She even did deep fried shoestring potatoes in the grease. I ate them whenever we traveled to Morgantown, WV for my orthodontist appointment. There was a diner. I ate one and if I could – two. My treat. I don’t know why I needed a treat. It was someone’s mom or my own who had to drive all the miles to the dental appointment.

And second, when I was in college and off to school, my mother would make BLT’s for lunch every Sunday. It was like clockwork. A habit. And I remember them fondly enough that the method and recipe remain about the same. The essentials are the bacon, tomato, and miracle whip. Yeah, yeah…but that’s how I ate them. So change the bread and do a different lettuce….

Third…latte. Didn’t know what one was till a couple years ago. Starbucks, not me. Didn’t go. Immune to coffee. I like the aroma. Never drank the stuff. I either slept or stayed awake but did it without coffee. Now we have a machine. I get flavored latte. Maple syrup, chocolate, hazelnut, and all other manner of tastes. Actually, the best coffee I ever noticed was Kona. Hawaiian. Grown on the Big Island. Smooth, no after taste. Expensive. Usually sold cut. So there’s Kona with 5% real Kona. Don’t fall for it. And so I’ve become a latte fan.

Where is this all going? I take pictures of everything. So here’s the picture. I was editing my recent trip to Chicago and this is a shot from home. I’m far from home again. This is a reminder of fond memories I left behind.