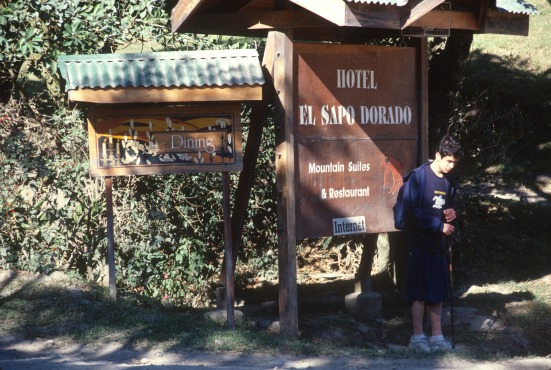 This is from 2002. I’d not given any thought to this picture until I realized how innocuous the internet was back then. Nowadays I travel with a smart phone. In fact, I got my first in 2014. I was forced into it. David made me buy it. Actually, he got it for me at the Apple store near Lincoln Center. The rest is history! Can’t live without it! Amazing! How’d I become so attached to my phone in just a few years. Do I need to mention books, information, images, video, music, and more? I don’t use it as my primary camera. But if you are a minimalist, travel with an iPhone and you are pretty much set. So, there in the corner of the sign in Costa Rica – “Internet” available. They were ahead of their time. I remember 2800 bps dial up. No, on this trip internet was not on my mind. In 2014 it was a game breaker and changed my life forever. You know what I mean. (wink) Hey?! Really? Remember that first call in June? You were nervous! iPhone to iPhone is free. We talked for hours. You have a twang. … a lovely one.

Costa Rica. I got three shots (one post). It rains – obviously. He’s made friends with a random dog. And here’s his imitation of an eagle – vulture. His sister was on another trip. Two weeks with a teenager gets you quality time and some silly candids. His sister had already been to Costa Rica. Her complaint was that we had better accommodations. Of course we did. 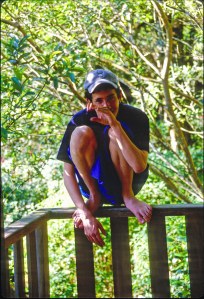 I would have to say that there is always an unwritten competition. So I have been warned to give equal billing to my kids. It’s good that I have one of each so that I can say that Julia is my favorite daughter and David is my favorite son. Costa Rica apparently is a surfing destination. When we visited there wasn’t much surf to speak of. However, David hopped up on a board without a lesson and rode on in. I guess his ski skills helped. And of course the waves aren’t too challenging. But I have to say it’s not bad for the first time without a lesson.

What’s missing is the sound track. In the rain forest of Costa Rica, they have a zip line experience. It was a rainy foggy day as is usual. In the mist and rain, I had camera and video on my person as usual. My son kept saying that his mother would never go. So because of that statement the guides singled her out for first ride. If she went, no one else would hesitate. So there she is screaming her head off, zipping along into the fog. I ask why you would hold your legs up when there is nothing for hundreds of feet below, but it’s a natural reaction. I went swinging with camera and video, somehow managing to hold onto everything. Yeah it could have used a sound track. 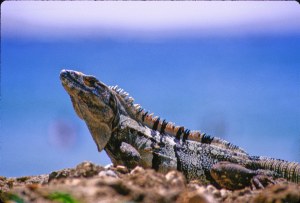 Costa Rica. We were on the last leg of the trip and found a beach where iguanas were everywhere. How could I know? They were about on the walks, walls, and on the grass, posing for my camera. What fun! I got my share of photo ops.

You can actually get a hotel room on the mountain with a splendid view of the volcano spewing glowing rock at night. We didn’t… budget… or choice. We had pretty nice accommodations. Julia stayed much more rustic when she visited with her youth group. I had a bunch of volcano shots and picked this one. It’s an editorial decision. So many shots and this is the one I chose. Another day another time, I might pick another. It was a pretty nice view so close to an active volcano. 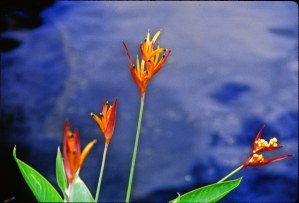 It’s called bokeh. Ah, they make up terms for everything. I understand depth of field and blurring the background to male it pleasingly out of focus in order to complement the foreground. It’s all summed up in ‘bokeh.’ Yup, Costa Rica. I had to look it up, the place. Oh, it’s a bird of paradise, the flower, that is.

Red is danger? We’re hiking the rain forest in Costa Rica and our guide points out this red tree frog. All I remember is that brightly colored frogs in the rain forest are poisonous. This little guy wouldn’t poison me. Would he?

Bird on a Wire

The title was also a movie with Goldie Hawn and Mel Gibson. Driving along in Costa Rica, the road was bumpy and dusty. Our driver suddenly stopped and beckoned. How he knew I was a photographer, or whether he was working for a better tip, I won’t know. But I got this nice shot and won’t forget his kindness.