Boy oh boy! Some dives you see hermit crab and some dives you see cuttlefish. I saw babie cuttlefish! They were very shy! And I saw this guy at the end of the dive. It made my dive. He was not able to get away and I got plenty of good stuff. He changes color and camouflage.

It’s quite fast. The babies don’t do as well or as quickly. But big ones have to start somewhere. There is a crescent under the eye. Or it that an eyelid? And you can see the pigment sacs which allow the animal to change quickly. Finally, there is ink. Squirt it and it confuses the predator. It works. One did and it confused me and I could not acquire the target again. As long as you see it moving, you can keep photographing. But if it stays still, then it is pretty hard to see. The human eye is way more sensitive to movement. Survival! It’s genetic! Science! Hurray! 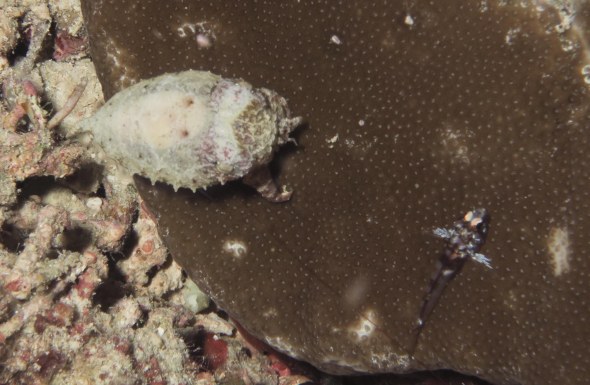 It’s summer. Summer is defined by the equinox, or, by the babies that abound in the sea. It’s a baby cuttlefish. (Check the last post) I was practicing my newfound technique of annoying all the urchins. Cuttlefish babies hide beneath. And then I am constantly amazed what shows up in my image. I’m old…vision could be better. Ask my kids, they could regale you with tales… Yes! A little tiny fish was there on the rock next to him. Unexpected finds happen. Here, I got two fish. I grant that the detail is lacking. And you are less than impressed. They eyes on the fish at least give you some reference. The cuttlefish looks like a little gray blob. And, I assure you, that is exactly how he wants you not to notice him. 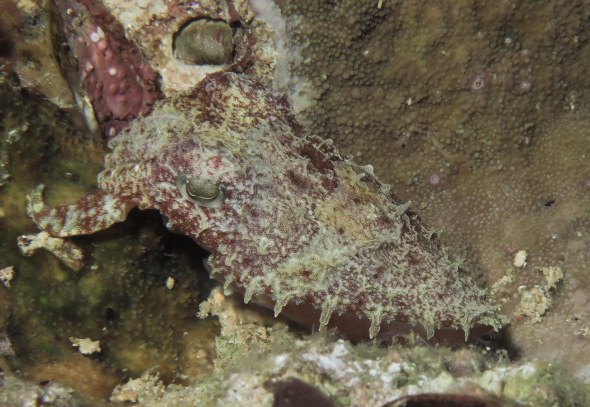 The problem with things that camouflage well, is that there is not much to capture on your image. There’s no eye to really see. But if you imagine how much fun it is to discover one underwater it would sure help this post. It helps to know where to look and what to look for. So first, I discovered – just now – that urchins are the big protectors of small creatures. Urchins are chicken too, as in the sense of being timid, not as in, “tastes like chicken.” Moving the urchins around annoys them. Sorry! But it also allows me to see what is hiding nearby. You can’t do this with shrimp. They are way too skittish. 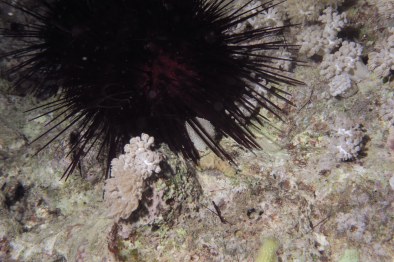 But the purpose of the camouflage is that you don’t see them. Standing still is a key to that. I suppose there is also something to be said for, “Don’t let ‘em see you blink.” I don’t see eyes (theirs) too well. If I did know all of this, it would be really easy to miss this tiny creature and mistake it for debris. The juveniles are not that good at all of this. So they stay for a while and move off like a shot. I got two shots of two different baby cuttlefish. And the third got away. That percentage of success gave me very few choices in deciding which pictures to post…. All of them!

Hooded. As opposed to non-hooded. It’s not much to look at. And it likes to camo – as in camouflage. So we saw it on a night dive. It’s ugly and really not terribly photogenic. So, you make do. You try to get the eyes. There is one in the picture. And I think he’s winking at me. No, I’m not paranoid. He’s also got this pink antenna like thing in front of its face. I assume front end is where the eyes are. Although they always say moms have eyes in the back of their heads… It was just happy enough to have me leave it alone. And like everything else, I don’t touch nothin.’

As an aside, there are very few people who enjoy night diving. Afraid of the dark? You bet. I think that the mind envisions a big shark lurking in the black waiting to gobble you and your flashlight in a single gulp. Yes, there are sharks. So at night the number of divers dwindle to about 2%. Well, whatever, it’s very very few. Grown men – afraid of the dark! 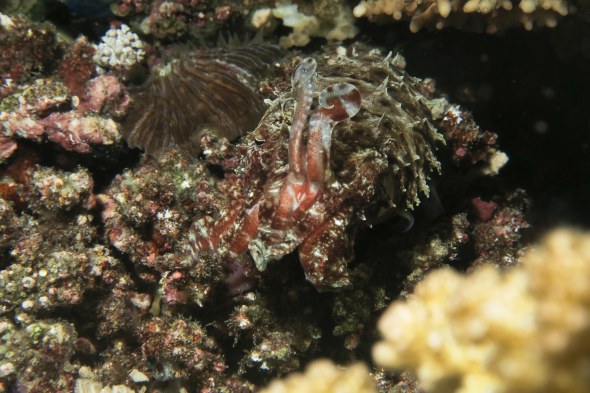 Too funny. Yes, yes, I was too – at first. There is a dive specialty for night dives. I never took it. I just did it. The guys I was with were doing the course with the instructor. Funny. My son did a night dive right after his open water qualification. No instruction except for what I briefed him to look out for. He didn’t even have his official card. He was brave. I talked my daughter and him into it. Come to think of it, I’m not sure how many night dives she has done. No matter, it’s pretty straightforward as long as you have your trusty flashlight. They followed me into the murky dark of the Red Sea at night. No one else was there to do night dive. It was New Year’s eve in Jeddah. The water was too cold for the local folk. Looking over my shoulder in the eerie light, I saw both kids holding hands and flashing their lights in all directions with the other. Cute. They never did tell me if they were a afraid of the dark. The highlight of that dive was that they found a hermit crab. When I went to position it for a good shot, they pulled my hand away. No messin’ with the wildlife. Their mother taught them that. I’m much more casual.

Sometimes I get what I wish for. I have been hoping to see another one. It is my second and on a night dive too. I had camera issues the last time and barely got a decent shot. Now I can say I got a shot and it was very confusing. The camouflage is so good that it obscures features that allow you to actually see something is there. But… it’s the eyes, always the eyes. So a head on view works. It is a bit spooky. Like octopus and squid these guys change colors. And he squirted ink at me twice. I could not demo this on film. A movie would have been sweet. But then again I was shooting with a strobe. And the other divers had lost interest and had abandoned me. So I had to go…. he was glad I went too.