Straight from the phone

Soph and Claire are the dynamic pair of dancers who’ve been at it since about the time… they were knee high to … could walk. Claire is in her adolescent growth spurt. She’s destined to be taller than any of the rest of us. I’ve been looking at a lot of iPhone pics over the years, as you may imagine. Priceless! Jess, you outdid yourself this time! Outstanding! 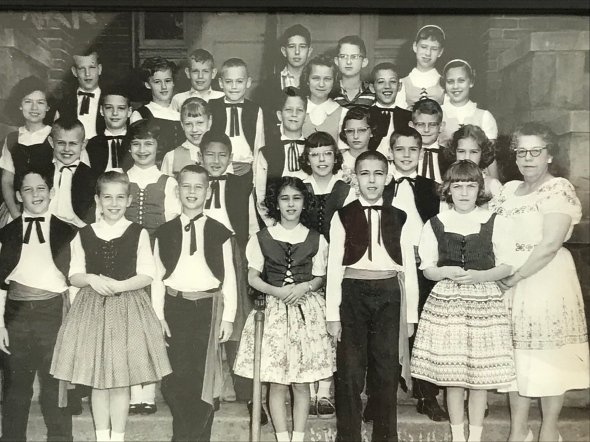 I have mentioned the A Cappers? It was a folk dance group we participated in during our lunch hours from 4th to 6th grade. Mrs. Cappadoni (get it? A Cappers?) was the advisor/teacher. This is the group. There is a lot of history here. Smart kids. Girls are here who have played a major part of my life. Anne my next door neighbor, she was gone into the wind, moved to Ohio, and lost after she was married. I tracked her down many decades later to be crushed by her lack of interest in connecting again. Beverly was my partner. Funny, in three years as partners, I do not recall a single conversation of substance between us. Colleen, she had her mom contact my mom and we had a “playdate” at eight years old. There’s forward thinking, before the term was invented. Yup, history played out in a very funny way. I haven’t been back to really see anyone since I left in 8th grade. Maybe someday… well, except!!

Yes! You don’t see this everyday at a wedding. It’s more like a male strip club. This is my new son in law. Wild and crazy? He says it is somewhat of a tradition among some of his close friends. The end of the wedding and the sweaty shirts come off. Yeah, about five or six were soon dancing sans shirts. I’ll save you the lascivious details. This post is G rated. Yes, one of Jules college roommates (and husband) was suitably surprised. They don’t do this in New York and Boston. That’s my nephew Andrew. He’s a drummer at Berkeley in Boston where music and craziness are not uncommon. He gets it.

And Dave? Yes, definitely a party guy, he’s about to open up his shirt. He got into the spirit of things. Trust me, Jules, newly married, was duly surprised too. This was another “gotcha” moment that made this a fun wedding like I have never seen before. Yup, they did something unexpected. And it was the last dance and the official photographer was long gone. Not bad Dad, not bad, I got it.

The images are real but time blurs things. It ain’t tears. I credit Stewart with these photos. They came via message from Jules. So it’s possible they are not, but that’s my story. I’ve told you the joke about favorite daughters. It bears repeating. I would always ask my patients if the daughter that accompanied them was their favorite. And the answer was usually, “They are all my favorite.” Once in a while someone would say, “Yes.” And there would be a round of laughter. Once in a while it would be, “No.” To that I would reply, “Be careful you might be walking home from the office.” Jules is my only daughter. And of course there was always the implication that if there were another daughter she would not be the favorite. She got the joke and responded, “But Dad! I’m your only daughter.” Okay! You heard that already! But then there was the time that I operated upon a man with seven daughters. He had a brain tumor. It was pretty serious. Six of the seven daughters leaned in over him as I softly asked which of them was his favorite. He whispered to me, “Jennifer” Aha! And then the oldest said to me, “But he doesn’t have a daughter named Jennifer.” Gotcha! 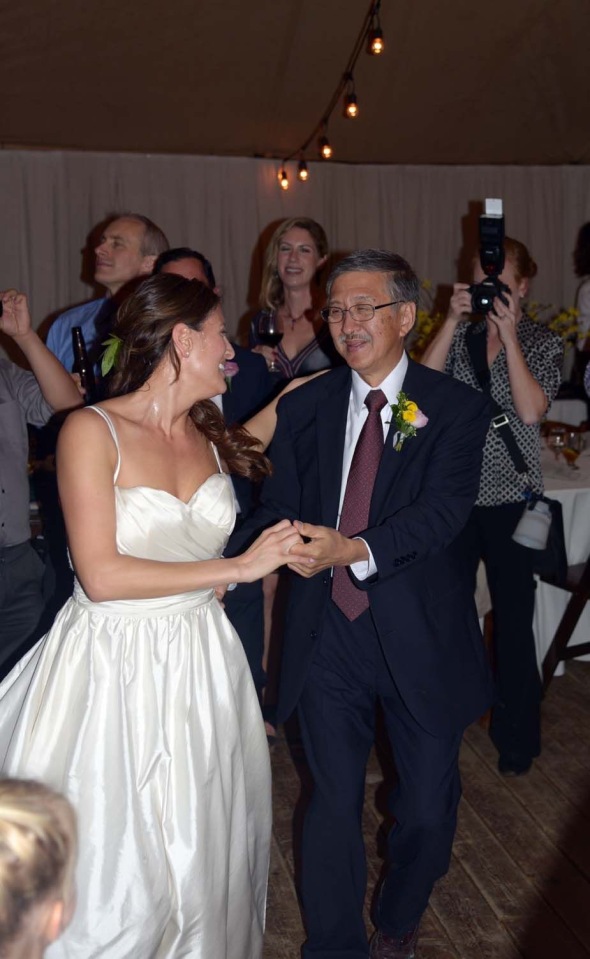 This moment occurred spontaneously. I told you I don’t dance. I did dance. Once upon a time for four years I did folk dancing in West Virginia. Yes! Four years. I once was forced to take ballroom dancing – foxtrot, waltz, etc – and ballet, and tap – yes, tap dancing. I had a forward thinking mom. It didn’t take. Seventh grade was heaven – slow dancing – and the seventh grade girls felt heavenly as we pressed together. That lasted till eighth grade and the twist and fast dancing forever changed me. Nope. Two left feet from then on… So I was almost home free. Everyone else danced. I did not. …Jules danced across the floor and snagged me. In an instant I was out on the floor and fast dancing away. That’s one of the wedding photographers getting another shot off her list – father daughter dance. New suit – Jules asked me to get one. And she reminded me to bring it when I traveled to California. I queried her “reminder” and Jeff responded she meant my bathing suit. Oh! Duh! It was 80 degrees the week before the cold driving rain. So maybe I could have gone swimming. Some of the hardy guys went surfing. The water was nominally 60 degrees. Yup, there I am in a brand new suit dancing with the bride. You don’t get to do that everyday!

First dance. Yes, they were pretty happy. Everyone was dry now. Well sort of… the ladies were still pretty steamed about their muddy toes. Everyone was laughing about it though. The gentle rain was a steady downpour outside. We were in a tent. And the venue was well done. No round tables all over. There were squares and rectangles. I have no pictures of the food! But it was excellent! Amazingly so! The crowd was in a good mood. Jeff still had his shirt on… Jules still wore the dress. She’d later change. It was way hot on that dance floor. Dance pictures at a wedding are a mob scene. Theirs is no polite protocol. Stick your camera in and get a shot. Lots of action. Lots of flash. The moment. Pure joy. Can’t you tell? It looks to be a wildly joyful marriage.