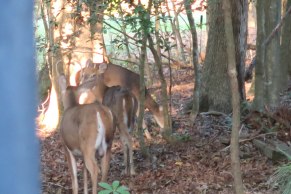 We pulled up to feed kitties. There was a family of deer feeding just off the driveway. Beware! There are signs on the road outside: Managed Deer Hunt. Oh well. This poor family may be torn asunder. I wonder if it will be bumpstock and silencers that get them. 600 rounds a minute ought to do a whole lot of damage and kill a whole lotta shit. Yeah, the NRA has us dead to rights. Imagine? They are bucking the will of 90% of the people. Yes, I would say the buck stops there.

I was up early on the morning of the wedding. I am in California and my internal clock is lost between Jeddah, Saudi Arabia and the East and West Coast. Don’t ask! WiFi is spotty. Cell service is not so great. Message – “Are you up?” Jules. She’s alone at this hour. Jeff went to surf. Cold water! She has a sore throat and almost no voice. Party last night – way late! She’s nervous and asked me to come before the craziness started. I didn’t much feel like getting up and going to the camp commissary for a hot cup of tea with lemon and honey. But, ever the dutiful dad, off I went in search of … Earl Grey Tea. Yes, even the brand was specific. No lemon. But lots of honey. I called the mom and she was grumpy reluctant because she had not slept last night. But hey, I figured she ought to be in on the fun. She arrived later. 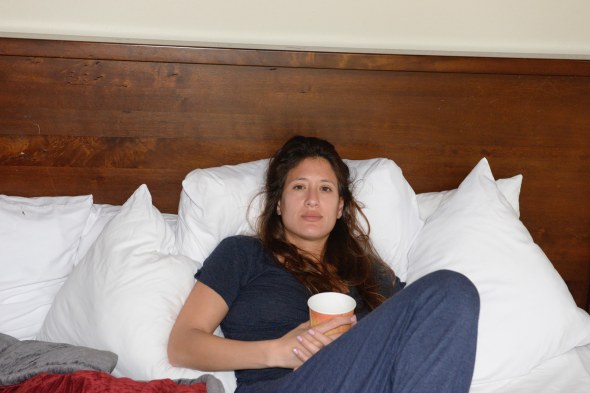 And just like that Jules and I had our Father of the Bride moment. If you have seen the movie, then I need not say more. If you haven’t, then, see it now. We sat for a few moments. It wasn’t about the tea. It was just the realization that things were about to change. Hey, I was there when she was born. I was the first to see her. Yes, the obstetrician was a close second. But I was first! Mom asked, “What? Girl or boy?” And then she asked, “Normal?” Doctor and nurse, we were both so worried about birth defects. I took care of so many ill babies that my sense of normal was completely skewed. I replied, “Girl. Normal, ten fingers ten toes. Eight on one foot, two on the other.” Probably not the best time to joke after  long and difficult labor and delivery. But then again timing is everything. Mom was not particularly amused. And in that instant when I first saw her, the other names we argued over were lost. The second pick was Lauren so that was the middle name. If you have forgotten I don’t mention Jules by her real name. Her students started stalking my blog and commenting about my posts to her. She thought it was too weird. Search her first and last name and she comes right up on the search engine. Mom eventually collapsed for a moment before she ran away again. Exhausted. Day of… countdown.

And there outside the window were deer grazing right next to the house on the top of the hill. Idyllic. Yes, this was my Father of the Bride moment. Thanks. I didn’t know if it could happen amid all the craziness. But yes it did. No, silly. You don’t spoil the moment with a selfie. Ha! I already took a picture with mom asleep, hair unkempt. Heresy! Sentimental? You bet!