I waited for the first glimpse. Even at 600 mph it’s a long wait from the Nile to the Red Sea crossing. Here it is just as we leave Egypt. All I could think was that Charlton Heston (Moses) parted a whole lot of water in that movie.

Egypt and the Nile

I passed out like never before on the flight back to Jeddah. I was barely awake after takeoff, just long enough to eat the meal. The shades were down so I didn’t peek until we were over Egypt. The first view was the Mediterranean Sea. Nope. It was just the desert. With the layers of blue I thought it was the sea. Wrong again, it was just a vast expanse of desert. The Nile from 39,000 feet is narrower than I expected. But you can see the irrigation and neat rectangular agricultural fields. I see the relationship between the river and the economy. 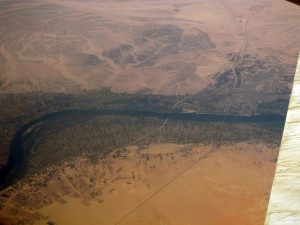