Take What You Can Get

It starts a conversation. Going home. The New York skyline. Even out of focus I recognize the Empire State Building and one of the East River bridges is lit in the foreground. Traffic was moving. No stopping. Oh well. It’s blurred. I will put this on my bucket list of photos to take when time and location permit. Meanwhile, I saw this at night driving around in New York City. I wish you had been there too.

There is a side benefit to sitting in NYC traffic during the evening rush hour. I was not familiar with Williamsburg. So we had to go the hard way. GPS is nice. It will get you there. But to be a native, is to know the short cuts and avoid the sitting. We sat. But it was sunset and the benefit was that we had ample opportunity to photograph New York as I had never been allowed. Yes, we shot through and out the window. We got what we got. The new Kosciuszko Bridge, the skyline, the Empire State Building, the Freedom Tower – all of this was afforded to us. 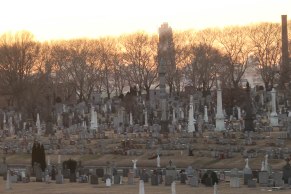 There was a big ginormous cemetery in Queens that one rarely glimpses over the high fence. I got it with the ESB in the background. Neat! 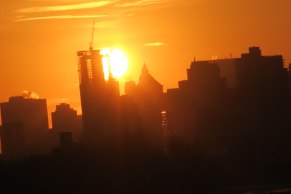 We still sat for a good long while. But there was something to do too. Stuck in traffic? There’s a benefit. You can see the city from a vantage you will not otherwise be allowed. There are views and then there are views. …silver lining.