This image is disconnected from my story again. Yes, sentimental again. It just keeps happening. Personal. What is clear is that folks like a happy ending. Go to the movies? It’s always a happy ending. Mostly. Really. Think about it? Butch Cassidy and the Sundance Kid? I never watch the last scene. Too sad. I know how it ends. They die. I don’t need the reminder. Nor the visual. Be careful about talking about sadness or sentiment. Folks want uplifting stories.

Did you see “Saving Private Ryan?” Tom Hanks says to Matt Damon (paraphrasing), “Nope, that is my private memory. Mine. I don’t share that with anyone else. It’s mine.” (That movie also ended badly.)

Here’s an image that would never ordinarily make this blog. It’s plants – coral. Boring. Who likes pictures of green leaved trees? But fall foliage, ah, a different kettle of fish entirely. Is humor (mine) obvious? I’m more in your face. Did you understand the reference to the ‘kettle of fish?’ No? Sorry. Someone might.

It’s nice when someone gets it. I like to whistle (while I work) – “If I only had a brain” from the Wizard of Oz. Once, just once, another surgeon got it. Did you? Ok. I’ll give you a hint. I do brain surgery as my day job. Duh?

It’s been a hell of a month. Big doings going on my way. Decisions, pondering, rearranging my life. That’s about as much as you get. But a couple years back I had another life altering encounter. So, yes, this is another special day. I suppose I could backtrack and recall lots of great days. Birthday, Christmas, on and on….

It’s very interesting. In this digital photography age my images are all numbered. The numbers repeat after 9999. So there are many images with the same numbers since I went digital in 2004. I do a search and all the 2345 images come up. It’s interesting to see what they show. Images come so fast now. I hardly remember except to look it up.

(An aside: the rhododendron sat on our deck for about thirty years in a container and survived everything that brutal winter and summer in NYC could bring. It would bloom on David’s birthday in April. When we moved, we took it. It’s transplanted in the yard on Long Island. Retired… and hopefully happy.)

Still, there are some special days. Two years ago, this was a very special day for me. Sorry, I ain’t sharing. You will have to settle for this image that does not match the story. I was just wondering how I’d work in this orphan coral image into a post somewhere.

I’m on vacation. The next eight days are scripted and scheduled. Dive photos, fishies. Sorry. I promise to mix things up when I return. Meanwhile I am posting what I shoot mostly in the moment. So it has been diving. My gear is changing. I’m due to return with a Canon G7X with Nauticam housing. Since few understand what this means, I have upgraded. I had sworn to keep the budget low but got lured by the promise of ever better control over the light and exposure and color balance and… Envy! I was envious of the divers with big rig cameras and the ability to shoot what I could not. So I hope to get better. Meanwhile I need a new dive computer. Mine is determined to be too liberal allowing me more minutes at depth than my buddy thinks safe. It just keeps getting more expensive. And though I’d love to be paid this remains strictly a hobby. Feather duster worms. Translucent, delicate, beautiful, and these were not seen before by me. 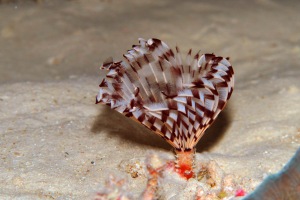 The other is pink when I look through my goggles in unfiltered light. The strobe shows it to be less than bright pink. This is reverse color desaturation. I like the bright pink. But I can’t show it. 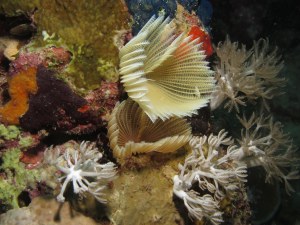 Ok. I got a question. Feather duster worms are fixed to their spot. They don’t move. You see them solitary embedded in the coral. How? How do they procreate? You know, make little feather dusters. How? So here’s the answer? They are seen together. In all my previous dives, I have never seen two together. And here! Well there was a pair, and a moment later a trio. Really! Someone I know says that a lot. Really! She said it once. I’m just repeating. …and repeating…and repeating.

No, I do not know why they are worms. It’s the name in my book.

Graphic subject and dramatic lighting, I used to get this on night dives. Now with the strobe and my current settings everything is more exciting. It’s hard to go back to available light.

The soft coral is just so picturesque with strobe. It’s named nephthaidae. I noticed my dive buddies would shoot this coral each time down. Some coral just look great with balanced daylight. And the feather duster worm is self-explanatory. Yes, it shrinks and closes up as soon as you touch it. Remember, don’t play with the wildlife. 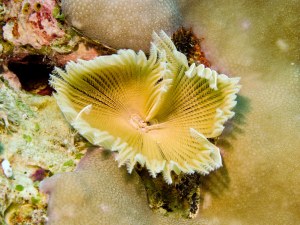 It retracts very rapidly to threat. The strobe makes it a lot easier to light and get a focused image. My problem is that I am still struggling to get the exposure perfect. I tend to get close and then the worm retracts. So I am getting fewer shots. But the ones I get are better than what I was getting before. I have to say this is so because the strobe cost me so much to get.

This is another tough subject to photograph. It is fairly rare to see on the reef. And the first times I saw it I was struck by how hard it was to get a focused image.

There is very poor contrast. And the color is muted. Flash definitely helped in both categories. The worm looks like the open end of a feather duster. It also disappears when provoked. And though I saw it several times in two days my previous encounters were very few.

This pink color is not commonly seen. They don’t move but contract in an instant until danger passes. So you sneak up on it and if you are lucky it will let you get in a couple shots. I get the idea of a feather duster. But a worm?