If you have more than one cat… well, it’s feeding time. The cats have trained me. They try all manner of coaxing to get me to come to the kitchen. Mostly, they know when it’s time to eat. As soon as I get to the kitchen they gather and jockey for position as though I might ever forget one. Heaven forbid! The can is not open yet but once open, Willow licks the sauce off the lid. The twins eat in the bedroom lest they cruise everyone else’s dish. All the cats have their spot to eat. Nutley is always done first and opens the bedroom door putting his paw beneath the door and prying it open. He then nudges the nearest cat out of the way to finish up their dish. I must have been late this morning. They were all over the closed can. Feed me!! 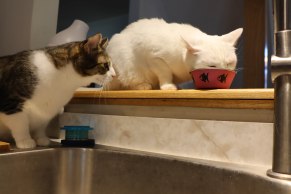 Unrelated to the fact that Nutley is stealing the bowl from under Willow’s nose, I have just accomplished a marathon backup. Thing can go missing so easily. My problem? Multiple backup drives all over the house. Sorry. They are in places which changed regularly as I moved around the past couple decades. Shifting sand. It’s always nice to do something you have not done. In this case I lost a folder of files, about a thousand images, from 2007, my Nikon D70. What’s a thousand in the scheme of nearly a million images. Not much. I have the OCD. And I don’t lose anything because I never throw anything away. Laugh. I’m not sure what to do. I began with the external hard drives within reach. There were nearly a dozen within ten feet. (slap forehead with hand for emphasis) Nope! I had made a redundant mistake across a dozen drives. That folder was missing in each and every. I have a database tracking my images. The missing folder was for real. Quit, give up, a lesser man with less OCD might. I made a trip to the basement fully expecting to paw through storage bins all day. Third bin, and I found a group of drives. About four tries later, the missing folder! See! OCD works! It’s a bad precedent. Any other missing folders? And how would I know? … I’m not losing any sleep. There comes a time when you have to stop worrying. 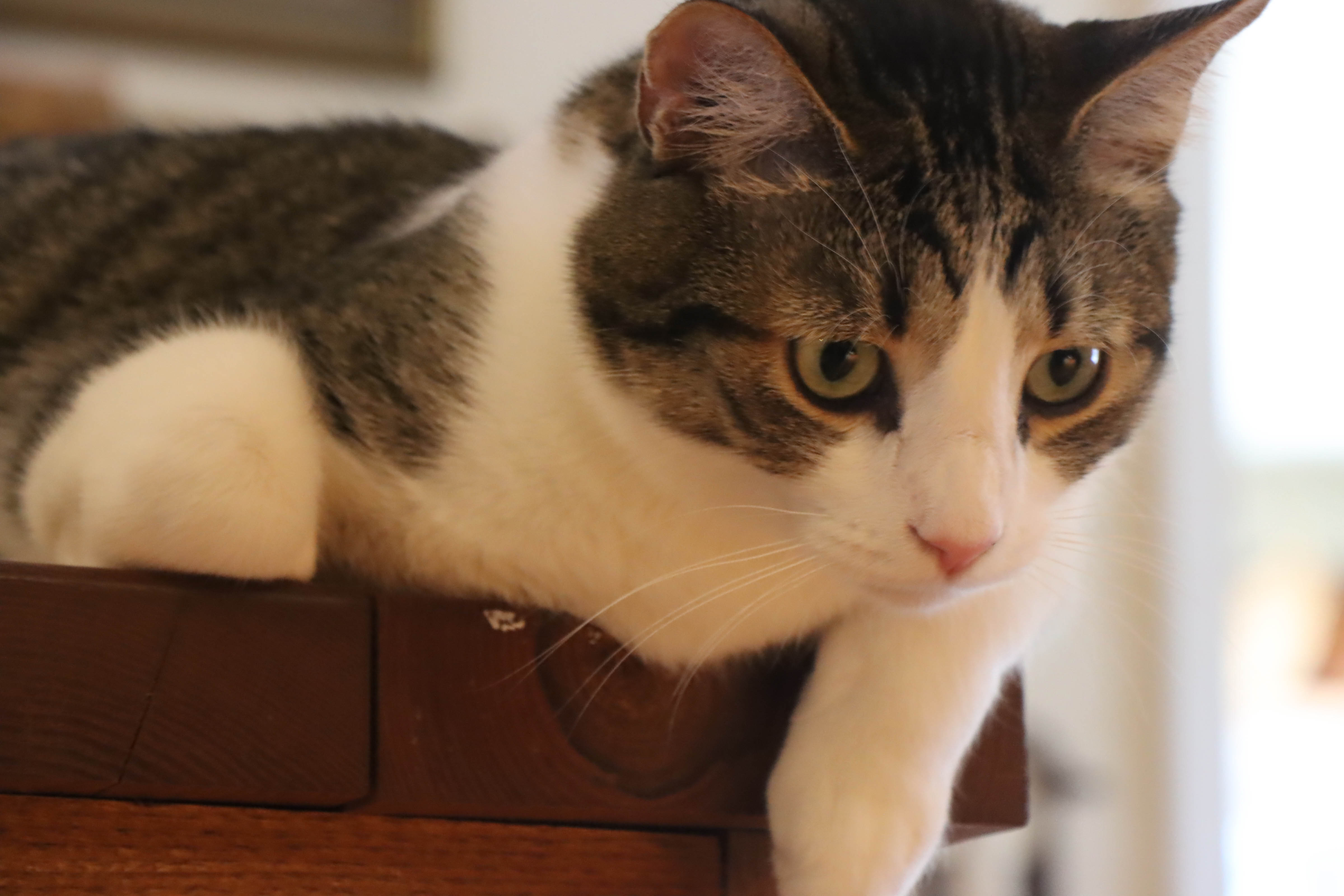 Nutley is a porker. He’s gained weight steadily since he came to live with us. He’s probably the heaviest now. And the other cats are all good natured. They allow Nutley to invade their bowls and defer to him. He’s not aggressive. He just noses in. His hearing is uncanny. I swear he can hear the others licking their bowl. Ha! This last pic is Ray. Twins. But I’m sure it’s Nutley who’s getting extra. Ha! It’s all unrelated. And one cannot effectively image the sweat on my brow to locate that missing folder. How’d I know anyway?

Not prisoner, Patch. I marked his ear intentionally so as to be able to identify him. It was important. I can’t tell him from Willow, his twin. And Patch had just returned from the hospital for treatment of his hyperthyroidism. He needs extra food. And, we can’t be petting him too much (treatment instructions). So, I marked him. He gets extra food. The disease ravaged his metabolism and he lost more than 1/3 body weight. So, to fatten him… extra food. And his siblings like to share in his bounty. Poor Patch, he’s a work in progress. He will be better in time but for now it’s back to work. And, no one eats alone around here! 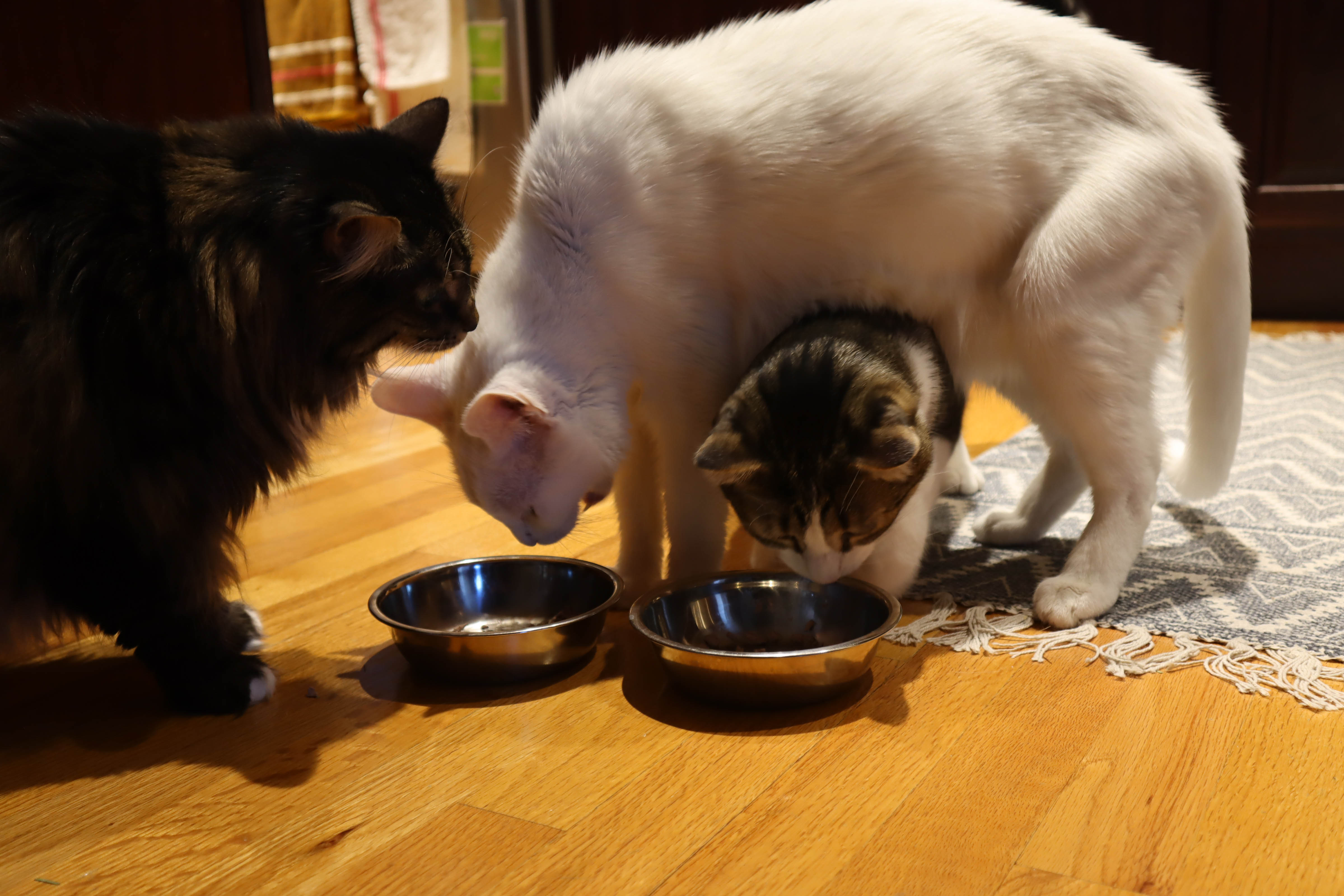 This is different. All the diving I have done rarely affords me the opportunity to see one fish eat another. This grouper had more than a mouthful and was determined to swallow its prey. There are other shots of fish with pieces bitten away. And somewhere I have a shot of a fish missing part of its head. Ordinarily this type of grouper is shy and swims away as soon as it sees me. Not today, this guy was awkwardly swimming but could not escape the camera. Maybe it was worried I wanted a bite. Either way I got a few shots and the grouper got supper.