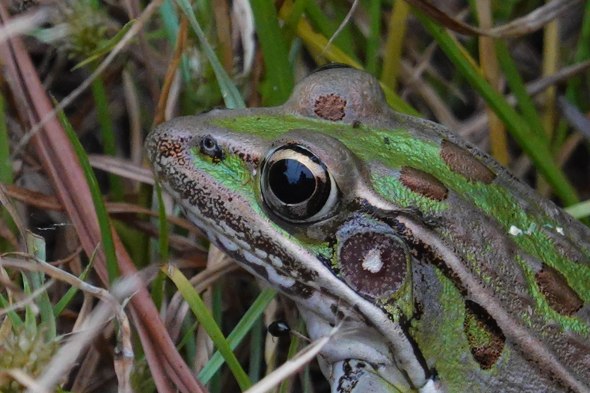 I see them. Not often. So, I photograph them when I see them. Logical. Detail, remember the rule of thirds, and so forth…. I look and try to make it mine. Sure, the subject is not new. It’s still a frog. But, I hope I made you look. 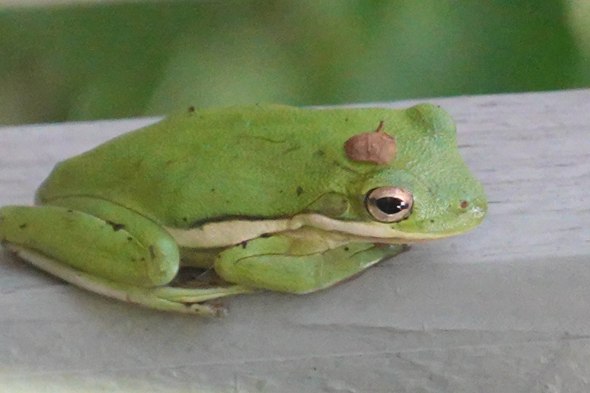 I saw the motion of a leaping frog as I watered the plants. I dutifully retrieved my camera and got some shots. Another? More frog pictures? I have pictures of a green frog… as recently as a few weeks ago. It’s like all the fish I saw in the Red Sea. You take the picture. It might even be the same frog (fish). It has happened. Honest. I post processed and saw the brown spot on the frog’s head. A tick! How about that? No spot. Tick! Darn! Do you remove it? I never did know. The frog was long gone before I ever had a choice to help/interfere with nature. No tick for me. I hope the frog’s ok. 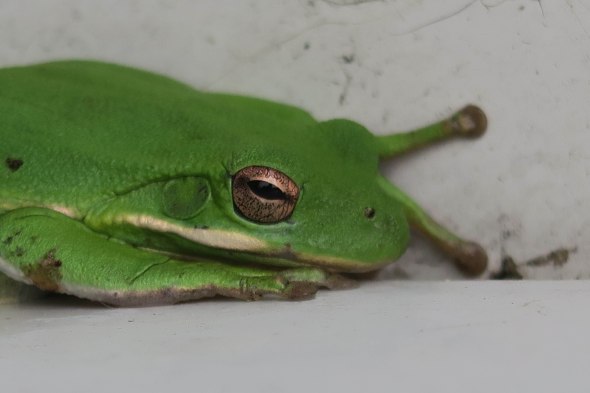 Yes, a frog climbed to the second story deck too. Why? To get to the top. Maybe he was promoting himself? Ok, bad joke. Another picture. I have a similar one from last year. Why not more frogs then? He has since moved on. I hope he got what he wanted. 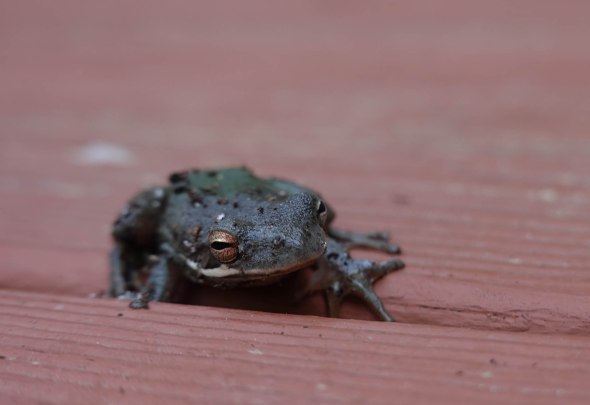 Sometimes, despite all the repeats, I fail to get the shot I want. Focus, composition, exposure, whatever, it’s not quite right. This little frog just jumped in front of my camera. My camera would not focus or the depth of field was too shallow. And so on and so forth…. I was planting the flower containers and the little guy just jumped out of somewhere. I caught the movement and got my camera. He waited. He never opened his eyes fully. He was perfectly calm and unflustered. He moved away later when I wasn’t looking. No real shot to pick from. But he was there posing till… he decided to leave. 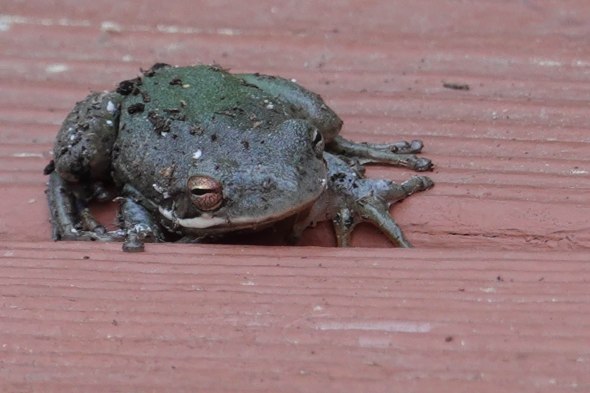 Oh! I’m better than I thought. Somehow this second shot was not with my others. It’s better. Not great but better. It looks the same as the other but it was not cropped so severely.

All summer long I have almost run over frogs with my lawnmower. Luckily, I have not. I have also been unsuccessful in photographing one. …until now. He was on the deck, on the planter, hanging out. How’d he climb up? Steps? Why? There is greenery to be sure. But there’s no body of water. And there do not seem to be any potential mates. How long do frogs live? Answer: 4-15 years. Really!? …because Colleen says it (this very same one) was on the deck last year and trying to climb into the house. Hmmmm?

When the kids were little I got them a puzzle of poison dart frogs from Ravensburger. It would take time to describe it. The pieces were identical triangles with head or tail of the frog on each of the triangular sides. You had to match up heads/tails and complete the puzzle. Okay? The point is that it was a memorable puzzle. It’s gone. It’s not online or on Ebay. That great puzzle went where all stuff goes when you’re not looking. There was a time when all of my old clothes went into a bag in the closet. If I didn’t look for them in a year, the bag went to the Salvation Army. I was none the wiser. I just lament that some treasured stuff is missing. Gee, that was a great puzzle. Oh! Hey, I got to see some poison dart frogs up close and personal. Wow!