I don’t do them. Never have. Here I am. Front and center. We are at the 50th reunion of the class I would have graduated had my family stayed in the community. Instead I am an honorary member embraced by all the folks who knew me way back when. Notice there is no mention of the time or year? Look at all the folks who got old and grey? Ha! To be honest there were a lot of people who came and shook my hand. I would not have recognized a single one. How’d they know me? …by the nametag on my shirt, of course.

By Elizabeth A. Harris

“In the face of growing pressure to tackle New York City’s widespread school segregation, Mayor Bill de Blasio announced on Saturday a proposal that would change how students are admitted to eight of the city’s specialized high schools, a group of highly sought-after institutions where students gain entry based on a single test.

Black and Hispanic students, who make up 67 percent of the public school population, are grossly underrepresented at the specialized high schools, which include Stuyvesant High School and the Bronx High School of Science.”

It’s another conundrum. The specialized schools are the best in the city? You can’t get a better education in any other high school? It’s a choice. You take a test and then if your score is good enough, you may choose to go. Or not. Level the playing field or dilute the talent. Even in a school like Stuyvesant you have a hierarchy. There was a student (whom I knew) who was number 708 in our class. Is it about status, or about education, or the ability to move with a faster crowd? Talent? Opportunity? Equality. A level playing field you say? I went to Stuyvesant. We were average guys (all male student body then). There was talent. Nobel? Ummm, no, I don’t think so. Better teachers? No! There was more incompetence because with seniority, a teacher could become assigned to Stuyvesant where the students were pre-selected and motivated self learners. Auto pilot! And in many cases we were – left adrift. We were once graded in English by writing our own grade on a piece of paper. Yes, you pick. like strawberries. I don’t know the answer. But, it ain’t easy. And politics should not be a measure of trying to make things better. There are quotas. They exist at Harvard. They existed at my NY state medical school. It’s unspoken. Legislation will always be circumvented. I count myself lucky that I survived education and benefited in spite of it all. Right place right time and darned lucky. At my last glance, Asians dominate the student body. When I attended (’60’s) it was Jewish. The conundrum is how to make a level playing field. Should we mandate that basketball teams have short players too? Or we should truly have overweight beauty contestants? The road to hell is paved with good intentions.

It’s not a popular name.

Thaddeus (Greek Θαδδαῖος, Thaddaios, from Aramaic תדי, Taddai / Aday) is a male given name. It means a heart or courageous heart. As of the 1990 Census, ‘Thaddeus‘ was the 611th most popular male name in the United States, while ‘Thad’, its diminutive version, was the 846th most popular.

I recall the name. I recall Thaddeus Potgalki. I have misspelled it. He was a hippie in my high school class. Mid 1960’s – duh! He had a beard before I had arm hair. I recall my chemistry teacher Mr. Schindler slowly savor his name as he pronounced it. He next appears in my memory in my high school English class when he gave a thundering delivery of a poetic piece. He was destined for drama as I was for science and medicine. I hope he did well. 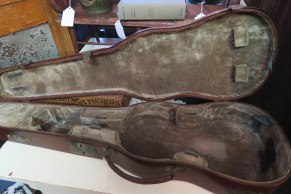 Found in an antique store… So, this is a story from my high school senior year. We used to joke about the Mafia. Guys with violin cases were in the movies “rubbing out” their victims when they pulled a Thompson machine gun from the case to “do in” their victims. To be honest I don’t think the drum ammo clip would fit in the case. But, joke about it, we did. And, for my birthday that year, Andy, my long lost best friend, got me a violin case. We solemnly walked the subway all day back and forth to Stuyvesant High. Anyone who would admire my prowess in playing the violin would be ceremoniously shot with the super soaker machine gun squirt gun within. Oh boy! We had a lot of laughs over that. It was the late sixties. I hardly think any law officials/bystanders would pass this as innocent high school humor in this day. Laugh or cry, you decide. I just had a laugh when I opened the case to find it empty in this antique store.

“Shop”  was the name of a class we took, sophomore year in high school. I went to Stuyvesant, a specialized science and math high school in Manhattan. You got in by entrance exam. We also got mechanical drawing. Go figure. Shop class was taught by Mr. Eiffert. He was a garrulous man who imparted wisdom like: when walking home in the dark hold your keys with the tips out like brass knuckles – just in case. Or, a can opener will do real damage if used to slash. Our shop project for the year was to build a valet chair with a lidded box for the seat. It would be useful if completed properly. Cut to the chase: mine never worked and was eventually tossed with the trash. Meanwhile, we were not exactly privy to the project. We were told to make each part without visualizing the whole finished project. Early on in my enthusiasm and lack of attention, I managed to plane off the tip of my middle finger. Yup! It was a power planer. Gone in an instant, so long finger tip. Fortunately, it was the nail – which grew back. I spent the rest of the afternoon in the ER across the street. Nothing to do but apply a bandage. The rest of the class spent the afternoon copying all the shop rules, long hand, into their notebooks. I got the best deal; I didn’t have to copy the rules. Funny, ‘cause I’m the one who needed to do it.

Fast forward, look at me! Mr. Eiffert must be rolling in his grave. I have set up a shop. I even laid in track lighting the other day. Neat! Yup, track lighting. Installed it without shocking myself. It’s bright, like a mini OR! Ha! Power stuff – yup! Chop saw, table saw, router, router table…. So far all the fingers and toes are intact. I’m planning to build a bookcase. This will be 8 foot tall and 8 foot wide. It better look good. So, the small projects thus far have taught me basic skills. I built two drawers. I built two tool boxes. I built three basket stands. I have built two jewelry boxes.

Everything you want to know is on YouTube. The problem is that there are varying opinions, so caveat emptor. I’m learning to stain wood. It’s actually like painting. The color you chose and the color you get are options and customized. And, of course, there are mistakes to be made. In this case, I admit that I am returning to high school shop class a bit later and slightly wiser. So far all of my original parts are still my own. 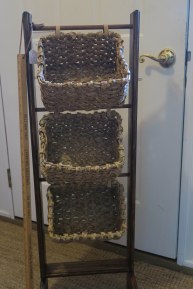 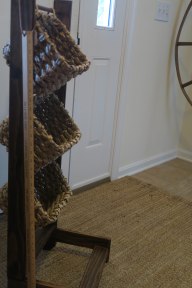