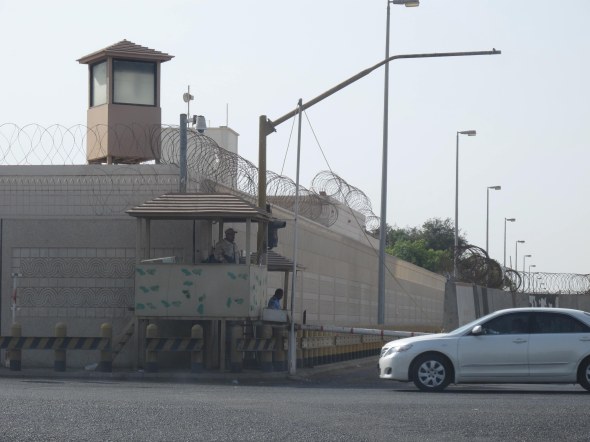 A bomber and his bomb went off in a spot close to where I live and work. In fact, the bomb went off within hours, maybe less, after I passed by the area in the middle of the night. If I say minutes someone will pull my ticket and make me come home…

I have a knack for being close to news happening. Currently based in the Middle East, I have raised lots of concern from people who care about me. And those people know I live life on the edge and am not risk averse. That said, I have been safe. I have never felt in danger. More crime happened near or to me in New York City.

Recent events (last night) – namely a bombing close to me has raised concern from a lot of people. So I suppose it is apropos to post and reassure you. To start you have to know that I am wired a bit differently than most people. I’ve been to lots of places and done lots of things. I’ve been in or close to news stories before. I’ve been mentioned in the New York Times: Once for winning the hurdle event in the Manhattan Borough track championship. (Hey! I digress! It’s my blog.) And the second was more extended coverage of a neurosurgeon who operated on the wrong side of the brain. (No comment) He is the sentinel case that triggered “Time Out” in the operating room. (How’s that for being in history.) Hey! I was on the sports page before I ever knew or read a sports page! The other story is sad, sad and someone died.

I’m gonna make this story long and convoluted. Bear with me, it’s entertaining (or not) for sure. To start, I take pictures of everything. And to be sure, I have more than 200, 000 digital images alone. They are spread across a myriad of devices and on multiply redundant hard drives. So to find anything is a feat of memory and ingenuity. I know I have taken a shot (a picture, silly) of the bomb site. Find it?! It took all of about 30 minutes. I knew that I did it quietly. No one should be seen to appear to case the American Embassy. And after searching, voila! I have actually shown and commented on the security to friends in a slide presentation back in 2014. Who knew these nondescript photos would be handy someday later on.

Back to risk – When I first visited Jeddah to interview for a job, I was taken to a wealthy residence to dive. I don’t dive. I did not have lessons yet. So, I snorkeled. My three companions went diving. I stayed on the surface with a point and shoot camera just playing with the fish. Peaceful. Calm. Tropical. Nice. My snorkel stood up and out like a flag. The passing coast guard patrol boat immediately swung around to investigate and then tried to arrest me. Without a worry in the world and without a shred of guilt in my heart, I was completely nonplussed. What followed was a mess that should have warned me. (But of course not…) The officer actually tried to pull me into the boat. I knew better than to be separated from the group without a translator. And besides there is no way to climb into a patrol boat without a ladder. They asked me to climb up on the outboard and in. Nope, not happening! 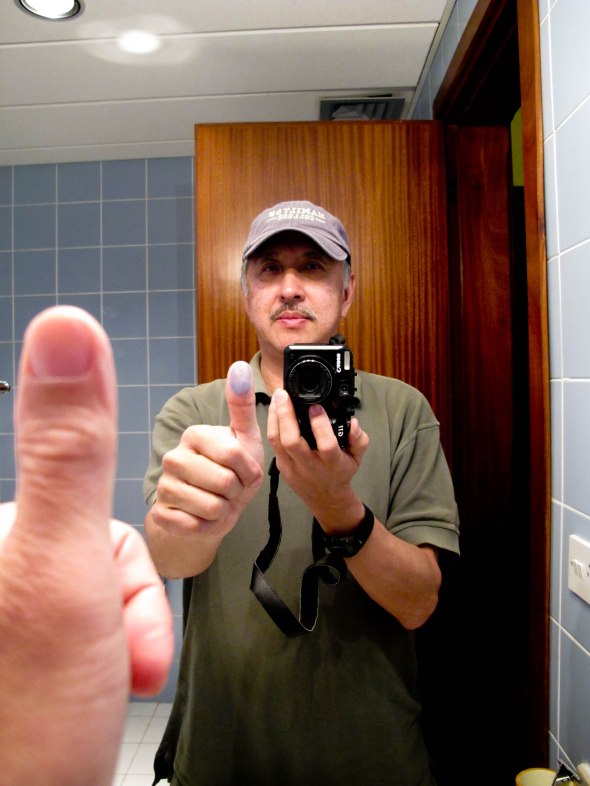 They sent me to shore. The adjoining villas are all walled from each other. I was motioned to the end of the wall and facing the ocean I could see around the wall to the neighbors place. I was greeted by the caretaker and his two AK-47 armed guards. Now it was serious. But at least no one was shooting. The other three divers soon emerged. As they swam to the surface you could see their bubble trail left to right from the neighbor’s water to the villa we were diving from. Aha! Trespassing! And not in just anyone’s water, it was the prince of terrorism’s palace we had transgressed. Well, they did it; remember, I was snorkeling (in bounds).

This prince was famous for stamping out terrorism years. It was bad politics and bad for business. So the story goes: he offered $1million dollar bounty on any terrorist. And the story continues, that people turned in their sons and brothers. Peace or relative peace followed.

So? We were suspicious assassins swimming in his water. It’s not his water. Certainly the fish do not recognize borders! But here we were. And then we were hauled off to the coast guard station for twelve hours! They knew right away that we were innocent. But the paperwork! took 12! hours. A very nice office wrote out, by hand, in careful perfect Arabic script a report for each of us. Three would be identical copies but he wrote out each separately and painstakingly. After all how long does it take to write? You can’t make this stuff up. Someone from the hospital actually had to come and vouch for my orthopedic surgeon host and me. (Later we found out the CEO’s father and the coast guard’s general were friends and we’d have been free fast. Who knew?) Afterward, like Alice’s Restaurant, we all shook hands, and took the phone number of the lieutenant just in case we were ever in a jam again. 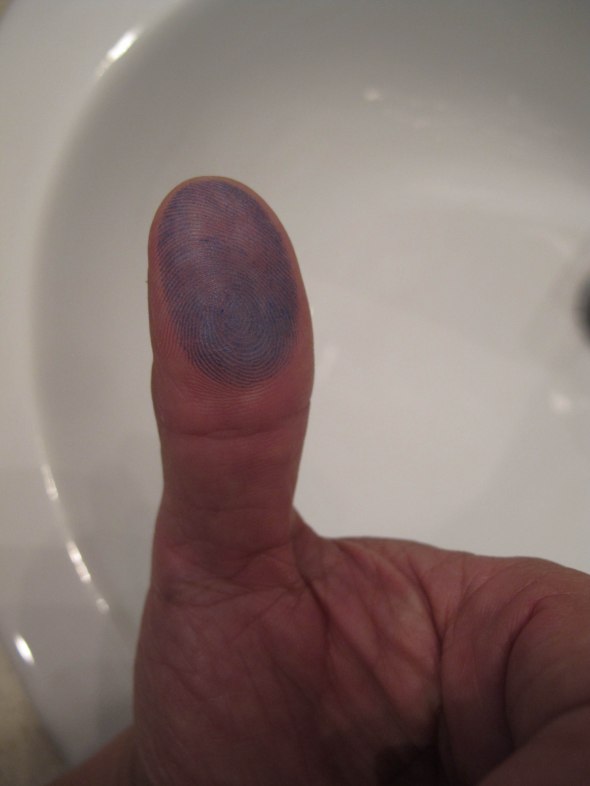 The order of the blue thumb – you don’t sign documents in Jeddah. You leave your thumb print. So each of us had to attest to our guilt – what me?! – by inking our thumb at every statement the officer wrote. That was a lot of thumb prints. Not one – a lot! And then no alcohol to wipe the ink off…. So, you see? I actually came back to work in this crazy place six months later. Don’t ask. The orthopedic surgeon and I are good friends now. He never asked. 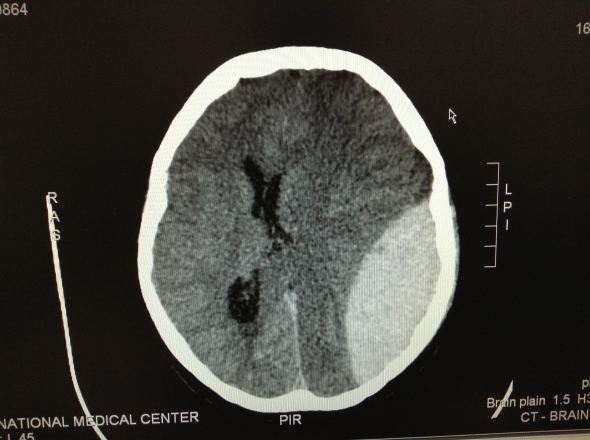 So two days ago on July 3rd I was called. Routine. I get calls for emergencies all the time. A recently retired orthopedic surgeon was in the hospital ER with subdural hematomas right and left side. I was going to do the operation the next day but was persuaded to operate in the night because his neurological was not entirely stable. It’s Ramadan. They fast all day. Break fast is at 7:10pm. So everyone did that first. At 10:30pm they called me to come on in to the OR. I had been napping after breakfast. Everything was ready to go. And at 11:23pm I joked to the anesthesiologist, “We’ll be done before midnight. I want to finish the within the same day I start.” Hey! At that hour… His nephew was in the room with us. He’s a house doctor in the orthopedic department. And the son was in the waiting room. He’s a general surgery intern with us. Even with a discerning hovering audience, everything went well.

I left and drove home safely and quietly. There are two ways to go. You pass by the American Embassy on the right of left. Hail Street is the local route. Andalus Road is a highway, of sorts, that passes the American Embassy to the left. Right or left, it depends on time of day and traffic. In the middle of the night, Andalus is faster of course. And I always go the fastest way home. Missed by that much, maybe an hour or so, because my assistant passed this way home too. He was about an hour or so behind me. He found all the streets blocked. Within the hour I was called about another emergency, but, I did not have to return to the hospital. Close! Some poor kid had his motorcycle hit by a car…or he hit the car. Either way, he did not need surgery though he was in a coma. Sadly, they often ride fast without helmets. No one knew of the bombing at the time. (And they close off roads all the time for passing motorcades carrying royalty.) 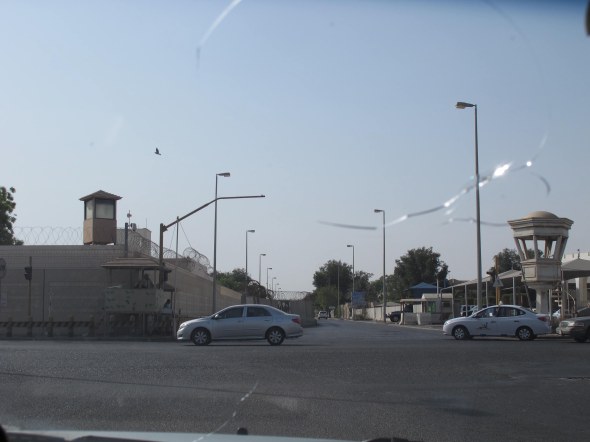 In 2004, the US Embassy was attacked and nine Filipino’s lost their lives. After that the embassy walls were reinforced. (Curiously the Iranian embassy is only minutes away.) A double wall of concrete with barbed wire was installed right into the street. The two-way street became one-way and traffic always moves slowly past. (They think nothing to just block off a street permanently.) To the right side there is a parking lot where the bomb supposedly detonated. A mosque is there on the corner. A large hospital sits to the right as well. The cousin to my hospital’s CEO owns Fakeeh Hospital and competes with us. Guards from within and without are there. It is the beginning of the entrance to enter the embassy grounds. 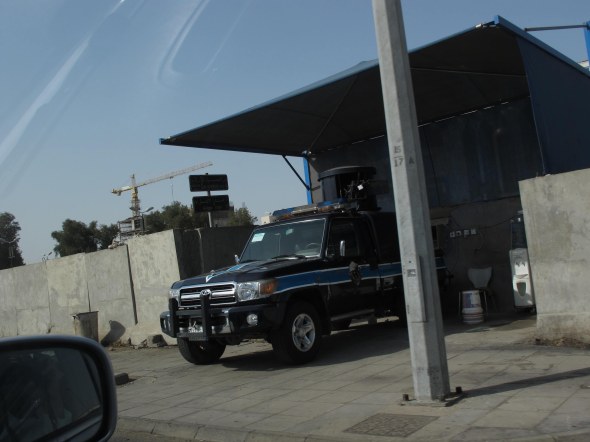 Across the street are the Saudi security forces in plain sight with uniforms and weapons at the ready. There is a pick-up truck with a mounted machine gun. My curiosity was raised to see whether the machine gun was ready to go. It appears that the ammo is not loaded up for immediate firing. No one sits in the gun mount anyway. But, this was what prompted me to sneak a pic and scope out the extent of vigilance. You cannot be 100% vigilant if nothing ever happens. You get complacent. I was wondering and gauging complacency. I guess they are pretty vigilant and less complacent. No one was seriously injured. The bomber was seen long before he got close to the embassy. 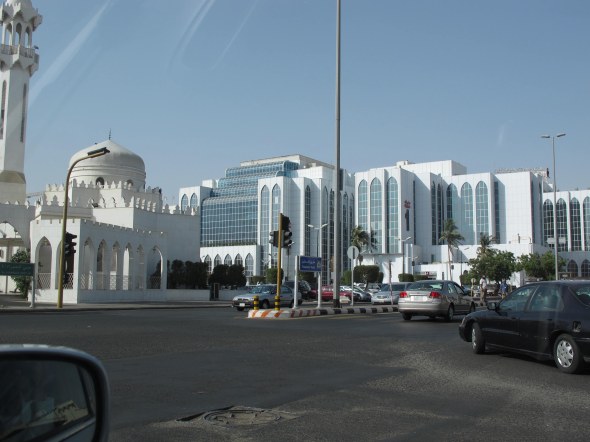 Bottom line: I know the site. And I passed by within a very short time before it took place. And, I very nearly passed by again for another patient emergency. Close, but no cigar? Close is for horseshoes? Better to be lucky than good. Good means fast and I finished and left before trouble occurred. It was July 4th – was it fireworks gone bad…? Bad jokes, all…. Go figure. The prince of terror may have more work to do again. Yes, my kids and everyone close knows I am ok. Thank you to all of you who noticed. It looks like there were fireworks here and, fortunately, I missed them.