Fettuccine Alfredo. Maybe you’ve had it, maybe not. There are two restaurants in Rome that claim to be the original. At least that was the case many decades ago. We tried both restaurants on that trip long ago. This is the restaurant where they put on a show as they served. It’s the original! The showmanship makes me smile even now. That’s Alfredo in the picture, Of course! 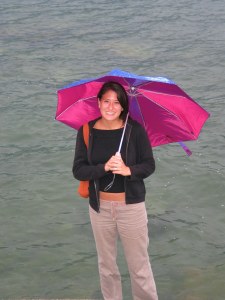 Well unless I told you how would you know where? But it was a mother daughter trip. Jules had spent a fairly miserable time in London. She had done a volunteer work in an exchange program. The problem was in acclimatizing. She was young and isolated. She did not know her way around. My phone bill was fairly steep with the consoling phone calls going back and forth. The upshot was that Lisa flew to Europe and they spent a few weeks in Italy. My kid grew up and she looks happy again. It was an experience she never spoke to me about. But the pain of it was palpable as it was happening. That was enough.

A Few Years Before… 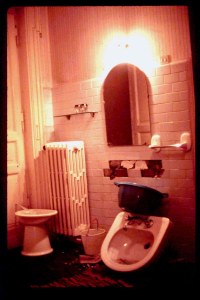 Shortly after Lisa and I met, we traveled to Barcelona, across the French coast and Riviera, to Italy and then Rome. It was eventful. Before we left Lisa’s grandfather died. I lost my wallet in Barcelona. I left it in a restaurant on a table. American Express “Don’t Leave Home Without It” doesn’t have offices to replace the card. So we had to wait until Rome, the end of the trip, to get a new card. And!! I proposed marriage at the Trevi fountain (Three Coins in the Fountain). It seemed pretty romantic. We almost broke up because, marriage yes, but after I finished residency, that would be in about three years… too long. I just wanted the proposal to happen in the most romantic place I could think of. We’re still married…

We arrived in Rome, down to the last traveler’s check, late at night and booked a room in the Hotel “…” no names please. They still might be looking for us. We took a room “sans bathroom,” cheaper. In the morning Lisa didn’t bother to go down the hall to wash up or shower. I was sitting on the bed. Yes, I remember exactly where I was. She was leaning on the sink.

And… crack!… followed by a torrent of water shooting into the room. The sink was tiled into the wall without any support beneath except for the plumbing. And there were no shutoff valves below the sink. Who thinks of this stuff? The room was rapidly flooding. The carpet was soaked. And I, in my birthday suit, quickly jumped up and did what anyone would do under the circumstances. I stuck a finger into each pipe and stopped the flood. Lisa was screaming in fear (arrest) and pain (sink fell on toe). I was thinking, I’d like to be dressed when the hotel maid arrived. So first, put on my pants. Lisa stopped hopping and screaming; helped with the pants. Remember, hands not free to act. Good! Get a chambermaid. Maid looks in with an inquisitive look. Eyes open wide! Classic! She throws her apron over her head and runs. (You can’t make this stuff up.) Get someone else. The porter comes. He’s clueless. He looks. He doesn’t help. He doesn’t advance into the room. I need him to find and close the shutoff valves. I don’t plan on being the ‘Little Dutch Boy.” No luck naturally, he doesn’t speak English, and I’m don’t speak Italian. We’re in Rome, duh!! The porter finally advances close enough to this half dressed nut (me, remember, only pants) so that I can pull out one finger and squirt him in the face. He runs off… I’m thinking to call the police.

Get me some wine. What! That would be Lisa still screaming… and she knows I don’t drink. I’m frankly amazed that I can think through this emergency that I have never encountered. Two corks from the trays lying in the hallway, thank goodness for room service last night. Corks into the pipes and the water is stopped. The floor is flooded and the carpet is soggy. What now!? We do not have the money for this disaster. Quickly packing… I mean just throw your stuff into the bags… and we’re out of the room and down the elevator. News of our mishap has just made it to the lobby. Lisa stops at the desk, screams out in English (Italian speaking hotel, remember?), “What kind of hotel do you have here?!! My toe is injured! I’ve been damaged by your hotel!” And it appears the desk manager misinterprets Lisa and thinks she is going to blame the hotel, so he yells back in Italian (translation unknown, I don’t speak Italian, I told you already).

With that Lisa picks up the two suitcases (heavy for me, but fear will do amazing things) and stomps out the door saying that we’ll never stay here again. Really? I follow with all the early morning guest staring at the two noisy Americans. All I can say to this is that I took one photo before we evacuated the room. Yeah, priceless. Someday, I’ll find the photo of when we stayed two nights in a working brothel. Oh, to be young, on a budget, and so innocent. 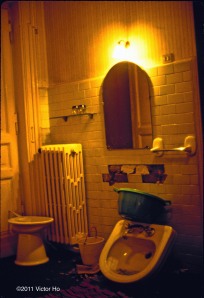 The Medici Hotel, Rome. Traveling through Europe, we arrived late into Rome. Lisa and I had started about two weeks earlier in Barcelona. Right at the beginning in a diner, I left my wallet behind. That meant all the credit cards were lost. No one tried to use them so if I could remember the restaurant, they are probably still holding my wallet. Well we traveled with traveler’s checks and were just about out of money. Don’t believe the saying that American Express will replace your card easily. It wasn’t until the end of the trip in Rome a few days after our fateful stay with the Medici Hotel that I finally found an American Express office. Lisa didn’t drive and she didn’t have a credit card. We were pretty low on cash. I will admit that a late night arrival in a strange city is no way to scout accommodations. In the dark the Hotel Medici was about the right price. We took a room without a bathroom. It had a sink in the room and the shower/tub was down the hall. The next morning as I sat on the bed repacking my camera gear, Lisa was propped up on the sink putting on make-up. I heard a crack and a thump as the sink came away from the wall to land on the carpet. There was no support beneath the sink. Lisa screamed. END_OF_DOCUMENT_TOKEN_TO_BE_REPLACED

The Vatican, Rome, Italy. This has been a fun slide for me. I like the beam of light falling across the column. It gives the shot a heavenly feel. And the kid reminds me of innocence. Another soft shot, but at the time, I probably was using ASA 100 slide film. Inside the Vatican, it was dark. Without changing over to faster film, my shutter speed was soooo slow. I still got a good handheld shot. I probably still had my f1.4 50mm lens.

Rome, Italy, the Vatican. I know that this is a soft image and slightly out of focus. I love the light and how it falls upon the nun as she prays. I think that the soft focus somehow works. It is an early slide. Today, my digital camera would crank up the ISO and I’d probably have an entirely different mood. I’m not against progress, but there are some qualities about film that are hard to replace. But, I haven’t shot another frame of film since I picked up my first digital DSLR. 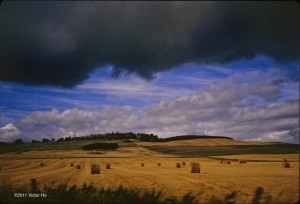 For travel photography, this is an iconic photo for me. We, that is Lisa and I, were traveling in Italy. I could be wrong about the location but that’s my story and I’m sticking with it. Anyway, if I had my way we would be stopping every 50 feet to photograph something or other. And we would wait about 10 minutes while whatever stray element left the scene so I could get a pristine unencumbered shot. You get the picture, eh. So of course we were always tearing along the highway from one town to another. And, there was no way I could justify stopping again. So, with my point and shoot Olympus set on infinity, I just stuck the camera out the side of the driver’s side window as I drove at about 60 miles an hour. There was no way this shot should have come out. There should have been blur to beat the band. For heavens sake even the horizon was straight, In fact with all the scans I have made of this slide, they all are grainy and I can only enlarge to about 5X7. Still, what a shot it was. I wish I had known. We would have stopped to record this scene properly. Luck, serendipity, …whatever. I still keep in mind that you won’t have an image if your camera is not at hand. For the kids… don’t drive and photograph.