No One Was Hurt 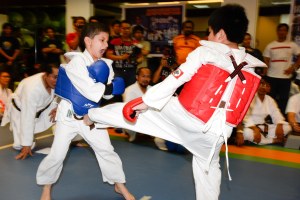 I attended a karate match. Brown belts, they were among the best students. You score for landing a punch or a kick on the pads in the front or on the side. You are not allowed to strike high or low. As I said there were no injuries during this match. It just looks like something happened. Ouch! 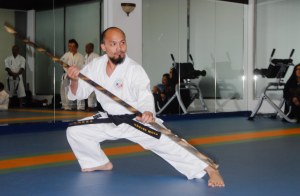 The other event I shot recently was the karate class demonstration. It’s in a fluorescent lit space. There’s no room to maneuver. Getting an angle of view and shooting the action is a challenge. I suppose video would demonstrate the skills better. But as time has gone by, I find that I look at my still images. I have many hours of video of the kids but hardly ever pull it out. Action… you have to anticipate. I’m using direct flash so there are shadows. I don’t know the routine so to catch a kick in midair is tough. And how do you catch the grace of the kata and the tension of the exercise routine? 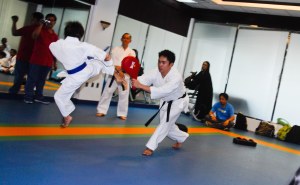 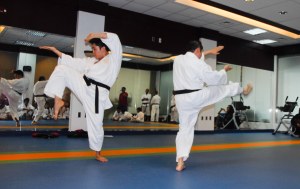 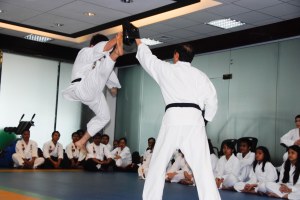 Prince and Sensei Tony are two of the instructors. During the exhibition part of student graduation, Prince demonstrated what a master can do. It’s not an easy thing to capture the critical moment. First I was using the on-camera flash on my Nikon D200. You don’t motor drive as Manny taught me. Besides there is a lag after the flash fires before it’s ready to shoot again – similar to shutter lag on a point and shoot. So you get one shot, and you’d better be on time for the image capture. Wow! Even I have to admit I got the shot. Not having seen the move before, it was hard to know where to be standing. Prince only did it once. I’d have changed spots but that was it – one shot – only – the peak moment. Hurray!