We had to watch three little ones. TV is the best sitter, ever! I bailed and took the easy way out. Sorry. It was a Disney movie – Dumbo. Mesmerized. Hypnotized. Badness. Everyone was distracted. Good? Bad? I viewed it as a means to an end. We were tasked with providing care and distraction. Oh, yes, we fed them later, food, real food, not junk. Hey, I can cook leftover mac and cheese. Grapes need no cooking. Yup, fruit, too.

Here’s a shout out to Shutterfly. They took over Kodak a while ago. And my photos have been preserved with them. Of course, I did not load pictures without keeping the originals myself. But where? I could no doubt find them in a little bit. Or, I can be tempted by their solicitous email. They send me memories from years back and I am supposed to respond by getting prints. For some reason the idea works counter-intuitively for me. Nice. They post my pics as a tiny file. I can’t take the file and actually use it. Is that right? Thank you. I can post them. No harm no foul. The issues open for discussion are too numerous to count.

Kids! Mine! They visited Jeddah five years ago. Hence, the abaya. How time flies! It was a special trip, the last I had with both my kids alone. Jules is married now and almost a new mom. Saudi Arabia does not allow tourists. They make their millions from the penitent to Mecca. So, it was unusual that my kids were allowed to visit me, pretty much a one time deal. So, this is a memory on many levels. A few years, only a few.

And street photography. It seems that my camera was a magnet. This group of kids was perfectly happy to ham it up while I took their picture. It was a request. Theirs! Thank you too.

I was there. Yup! Well, I could have missed it. But no, I was there for this singular moment. Eight months old. Early. Jules stood against the wall and then stumbled off. The rest is history. She was a champ on the track team. It was a memorable moment. I was there. I got a shot. I don’t have to make some excuse that I missed the shot. Not this time. I got something memorable. Here it is. I’m smiling to think that she dressed for this auspicious occasion. Okay, it was me: I chose the outfit – hat and pants. Really?! Goofy look? Priceless!

I got a couple shots of the kids with flowers. Classic. It’s a retrospective look. I scanned my old slides and these popped out for comment. They are like old familiar friends. I just never put them together like this. Side by side. They have stood the test of time. I liked them from the moment they were developed and I still do. Of course, the kids got old. They are still my kids…just older. Still cute. Shhh… don’t tell ‘em I said that.

Yeah, yeah, it’s early for Xmas. But then I might be late. These pictures were taken about two decades ago. Yup, little kids. Huh? I just got to scanning my old slide collection. I stopped in 2013 and just picked it up again. Thankfully, I’m still alive to do it. Digital is the only thing that will survive. No one’s gonna want to pull out and look at 100, 000 or so slides. Hey! I still have a projector. Yes! A slide projector! And a screen! Oh well, no one much cares. But then again… it was a tradition. Tradition? Yup. On Xmas night the kids started sleeping by the tree. They’d gather their blankets and stuffed animals and the latest Xmas book and… Nellie, the dog. They’d sleep through the night with the Xmas tree lit. Then they stopped doing it? I miss the old times, sometimes.

Imagine – he’s in the circus clown hall of fame. He slipped away on a technicality until…now. A staple and star he left/retired from the Big Apple Circus. Then a girl accused him. It was too late. He could not be fired since he was already gone. The circus changed owners. Now he’s back. The #MeToo movement fired up his accuser and he’s gone. Long story short. I hope I got it right. 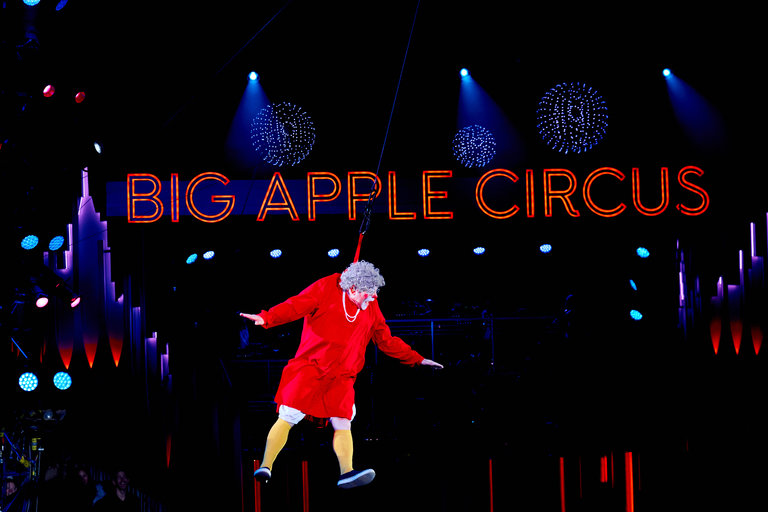 This son of a gun posed with my kids (when they were once kids). Who’d have known? As the NY Times noted: that’s not the man he is in “costume.” Yeah, pun intended (with sarcasm and shock). Sorry kids. I’m really sorry. Shocked? Saddened? You bet.

Blow yourself up. Not literally. Recent years have had an explosion of yard balloons that inflate and decorate your lawn. Purpose? …dunno. Now you can be the first on your block to blow yourself up. Yeah!

Finally! Someone with cleverness and wit, it’s not a prerequisite of the parade. But I get it. Brilliant! Yes, there were a few Harry Potters too. But Magritte? Great!

Another year I might have been at the famous – world famous – Village (NYC) Halloween parade. It’s for grown-ups as in it is humorous and elaborate and pretty R rated. Political satire and recent events are the inspiration. You’d have had a ton of Hillary Trump satire. Really!? Nope, this is family and for kids. It’s not NYC. The folks are friendly and not particularly fiendish. Go for cute. It’s called the Sea Witch festival and it brings in a ton of revenue to the local economy. The parade is big enough to attract live TV coverage. A helicopter hovered overhead. It was commercialized with every local radio station parading in vans with logos plastered along the sides. Yes, local business is supportive and heavily represented. In the end it’s about the kids. Right?

The event is a spectacle of stupid. Everyone fails. 100% It’s in the rules. I think that some things constructed were flimsy fantasies. And others were a serious threat to the Wright brothers. Ultimately, things heavier than air all come to land. If you are lucky the landing does not hurt.

Meanwhile my kids are grown and not with me. So? Shoot someone else’s kids. I did. It’s one grab shot on the fly. Farid’s kids don’t like to pose. And I don’t ask. I just shoot what’s there. Great! I passed along my images of the flying circus. His family made multiple framed prints and displayed them everywhere. Thanks. There’s a copy in his office on his desk. Meanwhile they use iPhone and get images and movies. But? A real camera? Nope.

The last time I saw snow was….mmmm… 2012. Anyway, it was a while ago. Skiing was one of my first passions as a full grown adult. I took the kids. David was so small on the mountain, people turned to photograph him on the steep blue/black trails in Utah. I’m not proud. I was an idiot for getting a kid who could barely walk straight up on a pair of skis. Laid back! David was so laid back he fell asleep on the chair lift. Nap time was nap time. He would just pass out. Oh! I started first by skiing with them between my legs. Jules and then Dave would be in front – I would ski slowly while holding them back with my ski pole. Yes, nuts too. Dave would lean over the pole like a cat arms just resting there. He snores! In the quiet shushing over the snow Jules and I heard him snoring away. Yes, nap time!

On this occasion Jules finally got her wish to try a “board.” Her cousins and brother had tried. She’s the only girl on my side of the next generation. The cousins are not too skilled. Dave can handle himself. And Jules spent an hour tumbling and falling. She sprained her wrist, gave in, and went back to a sensible pair of skis. Smart!

You don’t get to many selfies with your kids. But I guess it happens more than before. Low light, bad focus, poor composition, wide angle distortion matters not. Hey! It better than nothing. As I paused in editing I realize that these imperfect pictures mean the most.