Cute. I think there was a dog show later after the parade. Dogs were everywhere along the parade route and in the parade. When you see horses at the parade in NYC there are official NYC sanitation workers who walk behind to clean up. They always get a round of applause. Do people at the parade pick up? Do they pick up on the beach? Ah! See? On the King Charles spaniel, there’s a plastic holder for dog poop bags. Clever. How about horses on the beach, do they have scoopers there? 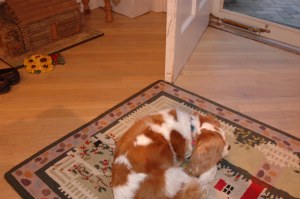 My dog Nellie was always anxious whenever anyone was out. She would sit by the door just dozing. And the moment there was noise in the driveway, her head would raise and she would perk up to see if the missing member of our family was home yet. Somehow it was easier when Nellie worried. She did enough worrying for both of us.

And this is the screen saver on my phone. My kids were unhappy when I told them I loved my dog more than them. I was kidding of course. Nellie had a knack for blinking whenever the flash fired. It was quite a trick. But she could do it consistently. How the heck do you distract a dog? 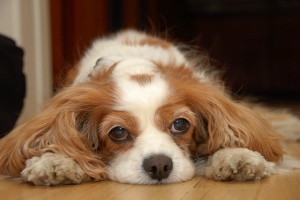