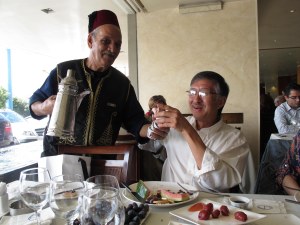 Here’s where I had a little scare. I was at lunch with Farid’s family, his cousin was seated to my left. I took a picture of the coffee guy. He mumbled something that even his cousin missed. She thought he was mad as he came around the table toward me. He wasn’t mad, he was being very accommodating to a tourist. The next thing you know, Farid is snapping a shot for me. By the way the watermelon is delicious and refreshing. I haven’t had a slice since leaving NY last summer.

I watched this unfold. Three floors but were they different apartments? A woman on the second floor came out to scold another on the third to stop getting dust on her blue striped whatever. I didn’t think anyone took out their rugs to beat them anymore. And why suddenly all together on the same day? 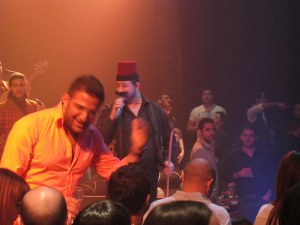 The family spoke about this outing for a few days before we went. I had been advised from Jeddah to be sure to pass by this club. You need a reservation many weeks in advance. What you cannot appreciate is the decibel level. I found my hearing impaired for hours after we left. Really!!! I couldn’t hear that it sounded like there was cotton in my ears.

There’s entertainment, singing and dancing… that’s Farid and he’s not dancing with his wife… but in my story I leave out the part that she’s his cousin. The whole evening he had four alcoholic mixed drinks. I had two and was ‘feeling no pain.’ Then he tells me that he had the bar water down his drinks to pretty much fruit juice with a whiff of alcohol. That’s the last time we go ‘drinking.’ 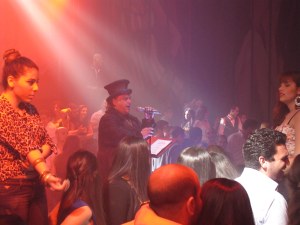 Our Lady of Lebanon

As it is in many places around the world, there is a statue high on the hills overlooking Beirut. Under construction is a very modern church. It has some complex curves so the scaffolding has been constructed without a straight line in sight. We came one afternoon to pray for Silva’s father who is very ill. 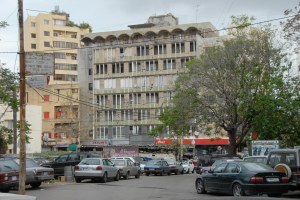 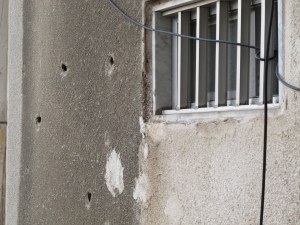 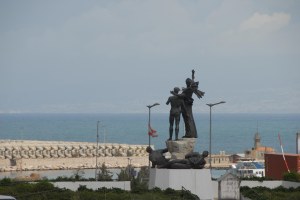 This statue sits next to the bombed and rebuilt section of the old city. And if you look closely there are bullet holes where the statues were shot. The martyrs were from another time, not this recent war. The violence is always just at the edge. There was a time, while Farid was in medical school here when another student was shot by a sniper. Farid stopped and took him directly to the hospital. I have been indeed lucky not to have been exposed to such violence and chaos. 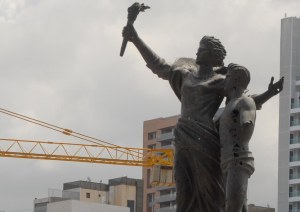 Water pipe…it’s not good for you. The amount of nicotine is the equivalent of many more cigarettes than are safe (not that any are). Well, this is novel to me. You smoke through a wine and fruit mixture to add pleasure to your experience.

I’m sure there is a name but for the sake of my memory it is the blue mosque. It really should be plain and simple. But the mosque stands out in the rebuilt downtown. It sits among ancient Roman ruins and new churches and chapels. Though we didn’t hesitate to enter the churches, we didn’t try to go into the mosque. It just seems that there is still a little tension in the air.

It’s modern, clean, and chic. Twelve years ago there was major carnage here. Every building was shot up and blown up. It’s all been rebuilt and you’d never know it until, I saw the pictures of the devastation side by side with the new buildings. Considering the earlier destruction, it was a tremendous job to rebuild in such a short time. Without the ‘before’ images, you wouldn’t believe how much has changed. 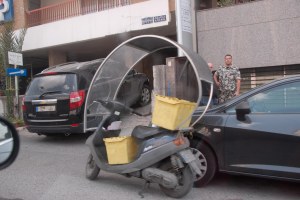 The guy on the right is police and the one on the left is an irate citizen protesting my photograph of the postal scooter. I didn’t know any of this. I shot the scooter thinking that it was a novel sun umbrella with which to keep shade riding around a hot city. Farid pointed out the irate citizen. Just a fraction of a second or a foot to the right or left and it would have been clearer. I was also probably about to offend the police as well. But we were moving too fast, and I had only intended to shoot the scooter. Who knew? It’s why Farid thinks that my time on earth may be limited with my camera in hand.