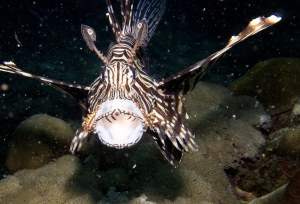 Open mouth. Lionfish are common on the reef. They are considered to be pestilence in some places because they eat all the reef fish. To aquarium owners they are a rather striking addition to the collection. And I have seen them often enough that you almost ignore them. Usually shy I am usually pointing my lens at their back and tail. So it’s not much of an interesting shot anymore. The newbes love them. First time underwater and all that… but me, I’m pretty much bored with the subject. We were cold and near the end of the dive. A stately lionfish was drifting in open water. They never swim fast but always swim away when I approach. Huh, I’ve told you that most fish don’t like big things (me) blowing lots of bubbles and swimming toward them with something pointed in their face. 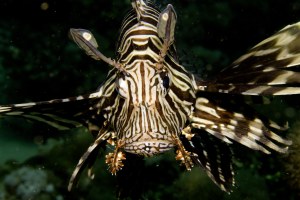 This one challenged me. He stayed at 90 degrees watching me with one eye. And then he turned. My shot! Head on straight and I looked into his eyes. You can see the bubble of his fish eye lens. Yes, that’s where the term comes from. I have this shot too. Many times over…but! He opened his mouth. Fish don’t do that! Occasionally maybe sometimes I have seen this. But he opened his mouth right as I was aimed and focused and exposed. Oh shoot! Got it. A single frame. Yes, there are so many unusual shots people are no longer amazed and they are truly jaded. Well, I got it and it’s my image and I did it. Proud! And my dive buddy in a turnabout proudly showed me his frame in profile. Right place right time, I scooped him on this shot. Yeah, turnabout. Yay! 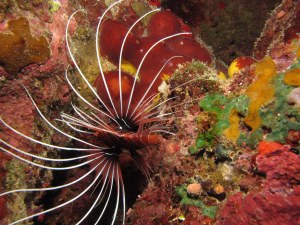 Lionfish are supposed to be predators and eat all the little fish on the reef. I have yet to see a lionfish attack. Instead they avoid me. They are always pointing into the coral and they swim away if I get close. They are an invasive species in the Caribbean. But her in Red Sea they seem not to be affecting the fish population. Oh, the reason I posted this image is that with strobe the coral is more colorful as well as the lionfish. I like the color graphic of the image. These fish are also popular in aquarium displays. I just stay far away. They are said to be very poisonous. 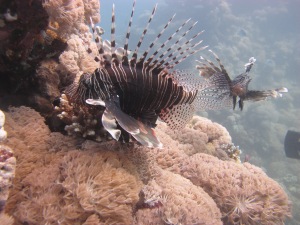 I never see lionfish hurrying. So it is a mystery to me how they ever catch anything to eat. They swim in a sedate manner befitting their dangerous reputation. I usually do not see them in the open. And I do not often see two or more together. The shot to get is head on. Most of the time even though they are fearless, I am always looking at the tail end. Which mean…you are looking at shots I usually don’t capture in my camera. If you look, the shots looks easy. And I laugh. 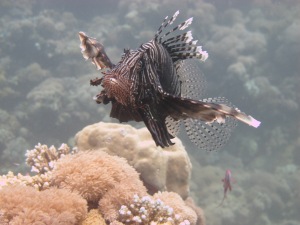 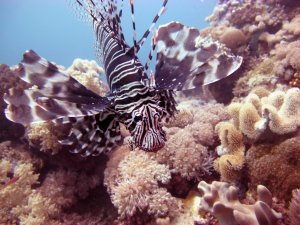 My early shots were side views and tail views. The fish is a predator on the reef. Certain areas of the world have a bounty on the invasive fish. It is alleged to have poisonous spines. Simple rule: don’t touch anything. Just don’t and you will not come away with any nasty surprises. Trust me on this – don’t touch anything! A head on shot is hard to do. The big eyes see me from a mile away. The fish always turn and head away. They sail majestically. There is no hurry in the fish. The best strategy is to have another diver chase the fish in toward you and then you reciprocate. I usually don’t have a knowledgeable partner. Then, you just swim like mad to get in front. Hey! Sometimes it works that way too. Lionfish eat about any small fish they can catch. They are not good for the reef. But as near as I can tell they are living in harmony on the reef I dive. 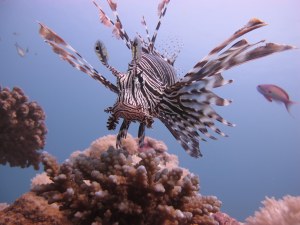 Ordinarily I might go through the archives to pull out a New Year picture. Too lazy. Lisa and I never celebrated new year. She was usually asleep by midnight. The kids would be out all night as they were older. I would get a call to be sure they were safe. Last year the kids were here in Jeddah and we dove on New Year’s and ate in a nice restaurant. This year is a different one than any others I have had. It will be special too.

Lionfish. It turns out they are shy. The usually point away from you. They swim slowly. They are predatory so there is no need to hurry. One strategy is to use two divers. The diver to the far side guides the fish toward you and you do the same for him. It is the head on view that is striking and hardest to get. You can do it the hard way too – by yourself. Lionfish are usually not out in the open and they don’t line up with a nice blue background. This shot looks easy. It’s not. 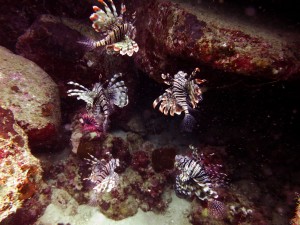 I had an epiphany the other day. I’ve been diving for a year. I learned underwater photography without a lesson and on my own. I watched my dive master and used common sense. I tried flash, ‘underwater setting’, custom white balance, used two different cameras (not by choice), and edited in Photoshop and Lightroom. So I just realized how far I’ve come… or how little I knew a year ago. Even so I got some pretty good shots. But I can now tell how much better I’ve become. I realize how not so good I was last year. Right away I was excited with some of my shots. Later Julia and I had a big breakthrough with editing in Photoshop. The subjects (fish) remain fascinating and different every time I dive.

In this instance we have been diving the same area of the reef enough for me to become familiar with certain areas to find fish. There is a concrete cave made from fallen slabs. 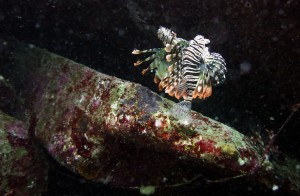 One day you find a stonefish, another day there was a spiky pufferfish. But recently it was a lionfish convention. There were six… no… seven. It was almost too much for my camera. And we were training a new diver. There were four of us and I had the only camera. It was very poor visibility as in there was a lot of backscatter – looks like dust and is mostly fish poop. White balance in poor light is also a problem. I couldn’t back away without getting too much backscatter. You never see this many lionfish together. Maybe they were planning to mate up. Down on the left is another type with spiky fins. Whenever you find them they are rarely swimming toward you. And my dive mates are always swimming away before too long. So it means you move on because you ‘never leave your wingman.’ 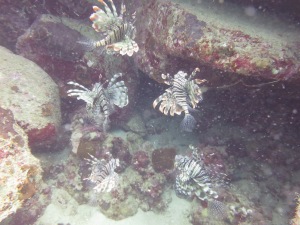 An example of the picture out of the camera, it needs a bit of processing.

I had three dives this day and passed this spot on the last two dives. With several chances, the light was best on the last pass. Otherwise I would have had some less dramatic shots. 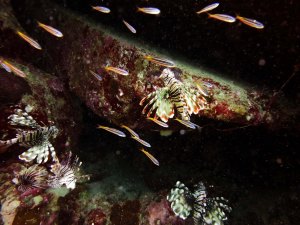 I don’t rely on flash. But anyone seriously needing to control the light is using a couple of external strobes to get a dark background. While I like ambient light, I can see the advantage to an isolating background and more consistent color balance. 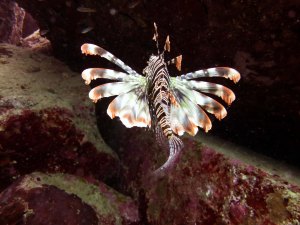 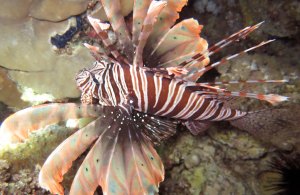 It finally dawned on me that I have been looking at two different kinds. Silly me, I’ve only been diving this reef for a year. This one has sail-like fins. It does swim slowly and majestically. 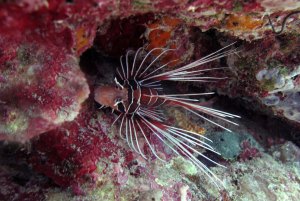 The other is mostly spiky and does not have the broad fins. The spiked ones seem to prefer colorful red coral. And they are usually hanging upside down. Both types are colorful. I stop and grab a shot whenever I see one. Because they tend to swim slowly or they cling against the coral, the lionfish is a reliable subject. But if you provoke them, they can really scoot.