The more the merrier…?

I should listen to advice and leave well enough alone. I’ve been doing quite alright. I have a pretty staid life… if you can call being a fireman waiting for a fire, staid. I’m on call to the ER and anything can happen. It often does. And occasionally, I am reminded not to wish for what I am careful about…. Right! Lulu the cat wandered in one day. I felt a little guilty. She seemed so tame and I suspected that she had escaped someone’s house. So far no one has come looking. Lulu came fixed. I immediately noticed the stitch from the operation. We had our trial and error; the introductory period was rocky. I’m not a cat person except by default. Lulu was the on who had adopted me. Several days ago another cat came around. She arrived with the usual crew to eat. They have names – the ones who are regular. Bidi – dumb as a stone – always waits outside my door. She meows and lets me know she’s hungry. Lily – lurks – and has terrorized Lulu in the past. They are not friends from the last rodeo. Two or three males show up infrequently. They do not have names. They give the picture of old and grizzled. Then a new cat showed. There are three groups as near as I can tell. Black and white; orange and white; and grey and white – the groups are distinctly colored and do not seem to mix. The new one was female young and quite eager to get into my business. I saw her once and then not again for a few days. But she came around again and this time I brought her inside my villa. Mistake! Lulu was immediately hissing and yowling. Her hair stood on end. She was pissed! Scary really. 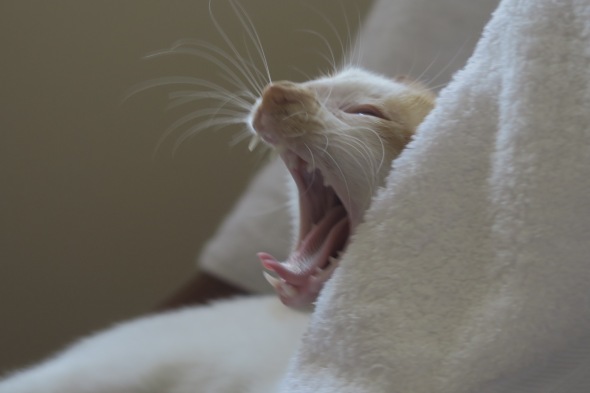 I did it for her to have company when I was working for long hours. I imagined she’d be bored alone. I have already been advised that this is a bad idea. Cats are territorial. But? They are out in the compound and wild and get along, don’t they? I guess not. So feed six have two. I got two in now. So far it’s a standoff. I’ve lost blood. They have sharp claws. The new cat is timid to a degree. She’s indicated that she’s staying. And?! She’s also been fixed. What is it with females and me? All fixed. Good. Easy. No new cats later to worry over. Was she also a house cat – escaped? Name? Ah! Lulu got her name from my ‘net search for Arabic names. It means pearl. Lil had her name for a day. I wanted another “L” name. The single syllable name did not cut it. Besides, it was the name of someone’s awful cousin. Okay! Creamsicle?! She’s orange and white; uh uh, nope, nada, thumbs down on that suggestion. It’s a name not a product I sought. Voila! Casi – it has the letters of creamsicle and has two syllables. It works. She’s a very sweet docile cat. I wish could recall the same memory for some of my old girl friends.

Meanwhile the fur flies. Lulu has barely made friends. Territorial, oh my, if they don’t make peace soon, someone’s gotta go. I’ve been scratched and bled – all in the name of perceived loneliness and friendship. I hope it’s all worth it. For now, separate places, separate food dishes, separate water and I try not to favor one or the other.

Casi hides out where she has some tactical advantage. She’s younger. But I think in time she will be bigger than Lulu. Hopefully she doesn’t get the same habits. There are good and bad. What have I done? “Poked the bear.” When everything else had settled down to just about alright, I went ahead and poked the bear! Two female cats – I’ll be sure to let you know if they get along.

I am stuck. The blog has begun to dictate to me. I take photos underwater and compose snappy posts. Lately I am taking photos or not based on whether they are blog worthy. So, here is my confesstion and a start of a new day.

I’m not a comic. And it started as a blog to tell the story behind the photos I take and have taken. And to all who read and follow thank you. I have appreciated all of you who follow. I have been lacking in expressing my thanks and only a few of you today will know that. All the followers do not read on any given day. But to you all, thank you for reading and following. I do not believe that this includes my kids or wife at the moment.

Funny. Lots of stories about them and … Suffice to say I was warned about embarrassing my daughter. I will recall to you that she sent a plaintive email telling me her students had stalked her online by searching her first and last name. The great “Google” put her name and mine together and voila! She was there for all her students to see. So now she is referred by a nickname only.

Gmail reads my stuff too. I was asked about forgetting to add an attachment. I had referred to something using the word. And before I sent, they asked! Is the government breathing on the other end of my ‘net connection?

An electric car now drives by computer and sensors without a driver. It’s safe. It had one fatality and everyone has called for the death of the driverless car. Let’s say that human error has resulted in way more death. Shall we remove humans and be safer? Ah! The rub!?

So never in my life, and it has been a long and opinionated one, did I ever imagine being a cat person. Nope, never, don’t like ‘em, don’t want ‘em. They are not affectionate and don’t come when you call. No tricks. No particular entertainment value. And no one says, “What a pretty cat!” when you walk it. I guess it’s ‘cause you don’t have to walk it. Ah! Litterboxes are so much fun!

So to post now and again about Lulu has to the delight a number of people who have known my dog – Reggie – and then – Nellie, two Cavalier King Charles spaniels. Royalty. Dogs of kings and queens. Lulu – pearl in Arabic – a mutt of no known family – feral living in my compound behind closed walls, adopted me. Yes, she came inside one day, escaped once or twice, was set free a couple more times, but has now settled in as the ruler of my villa. She has been in all the bedrooms and has dusted. That is to say she has raised all the dust and moved it into the room. I might have to dust the rooms after studiously ignoring the fine layer of evenly distributed dust since I moved in.

She squeaks, so her middle name is “Squeaky.” Otherwise she never speaks. She alternates swatting and swiping, with purring and sleeping. She has explored up and down. I am not cat proofed – until now! She loves wire and string. She is not allowed to eat my phone charger. She especially loves the end of my iPhone charger wire. You know, the lightning connector. Yeah, now my wires are all tucked away.

Lately she has taken to sleeping in my desk chair. She climbs on my desk (very messy and you don’t get to see…). There is barely an open square inch. She does not step on my keyboard. And she plops down and gazes out the window at the compound below. My window is the only open one in the whole compound. At night all the curtains are drawn shut and not bit of light escapes. Come to think of it, they stay closed during the day too. I am now owned by my cat. She adopted me, she came in, and now she runs the place. Yeah, “What me?” owner and cat.

Ok, I suppose I secretly have a favorite. It would have been a tie with Badi. But Lulu turned out to be the one. Lulu, the name means pearl in Arabic; I took the time to look at some popular Arabic names. She more or less adopted me. One day I opened the door and in she walked. She had been in a spat with Lily and did not want to be near her. Did I mention that they usually all got separate piles of food? Yeah, five separate piles, like setting a table, each time they fed everyone had their own place and space. Badi and she will share. They actually nuzzle one another. Otherwise each keeps to his own space.

So, in she strolls. Her tail was straight up and shaking. Cat lovers will know what all of this means. I kind of get it. I fed her right at my stairs. Lulu ate and looked much more at ease that Lily was not a potential threat. Then Lulu took a stroll around my place. It’s not a neatly kept villa. My bad. She haunched back down to eat and had dust in her whiskers and on her toes. Yeah, my housekeeping skills need an upgrade. Then she got really brave and walked upstairs and downstairs and explored, all the while not panicking that she had no door out. No, I don’t leave the door open. We have mosquitoes. And I get bitten frequently. And I don’t want an obscure tropical disease. Yes, cats carry disease but Lulu looks clean enough and so far I am still healthy. After she explored, I felt distinctly as though I had been on tryouts.

The next morning as I came do to get my stuff ready, there was the sound of meowing I could not place. It turns out Lulu was outside the door waiting to hear me move about. She walked right in again and sat and ate. One evening she tried to persuade Badi to come in again. He wasn’t having any. So they both stayed away. Needless to say Lulu is friendly. She and Badi will rub all around me and hide under my legs for protection. Neither of these two nip or scratch. I can even jostle and lightly annoy them with hugs. They are easygoing. The big test is whether they are still hanging about while I am gone a couple weeks. I think so, they are getting fed from somewhere else, and they were getting along somehow before I started to feed them. Who knows? You know? Even as I write up this post I’m still having trouble telling Lulu from Lily. Imagine forgetting your kids’ names or their birthdays. Geee!