… not really. I’m not professional, strictly amateur, as far as photography is concerned. I have sold an image or two. It was a mix of surprise and curiosity that I was contacted via my blog for use of an image. The request came via an unused link from an unused blog I had many years ago. I was suspicious of a scam. But, it turned out to be a legitimate request. The image in question was cropped from the original and used strictly in an internal memo. So, what the hell, they got it for free. Dumb, maybe. I got a credit for the use. Consider it a charitable donation. The image? It was the NYC Marathon Sunday crossing the Verrazano Bridge. 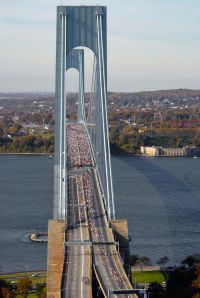 This post ties in with other discussions on this blog. J recently ran the LA Marathon. I met Charlie and we flew in his Bell 47 helicopter. I shot with Manny, from Sport’s Illustrated. Manny told me of the quintessential shot of the NY Marathon in which the image is made of the runners cresting the Verrazano Bridge. Well, I was in the position to try for this image. The shot had been described but I had never seen it. It was crystal clear blue sky day as Charlie and I hovered in his ship over the bridge. It also helped that he had been a former NYC Police helicopter pilot. We were not chased away from the venue. All that remained was to get that “shot.” You can go wide or tele. I know I didn’t quite get it right. I got a lot of images but the “one” got away. I still count myself lucky to have been there. A lot of stars came together for me to have the chance.

Well, the unofficial official time is in… J did very well in her age group, among females, and overall (better than 75%) among all racers. The top woman in her age group was one of the top finishers in 2hrs 25min. The next woman after that was 2hr 43 and then 3 hrs. Except for the first two women everyone was in the range of 3 hrs and up. Competitive? Well J finished better than 80% of the other women in her age group. Lisa sent video. She needs work as a videographer. J was on screen about a second and a half.

The finish line video is out also. Amazing!! In this day and age everything is recorded and you can get access on the internet. They had a two camera angle setup and you can look up your video based on finish time. It’s Los Angeles – Hollywood – but this ain’t a Hollywood work of art. I know my daughter and couldn’t pick her out till I looked at the video about 4 times. But since I’m accessing this information from halfway across the world, hey, not too shabby!

The next thing are the race pictures but no doubt screen saving an image or two will trigger all sorts of copyright problems.

Am I still competitive? Well the other day in the pool, the training coach goaded us into a short sprint. I got touched out by a colleague 20 years younger and was pissed.

When I was a senior resident, my chief, Dr Ransohoff, arrived at the hospital late one weekend night. He had traveled back from the Hamptons having injured his quad muscle in a footrace in a parking lot outside a restaurant. I didn’t know from quad injuries and it was a strange feeling to be examining my boss’s quad as he dropped his pants in front of me so I could check him. All the while his disapproving wife was in the background making the sounds of, “I told you so.” Come to think of it, I’m about that age now. But don’t worry, I’ll not be dropping my pants for an exam anytime soon.

Me running? I never did like distance running though the coaches all told me that my build was not for sprinting (which I preferred).

J, it seems has found her niche. She did middle distance in high school but was not a fan of distance running either.

David was not a competitive athlete but has completed the NYC triathlon which is no minor feat. I was surprised at his skills in swim, bike, and run.

No couch potatoes, these kids of mine. Did I mention I’m proud of them both?

Marathon Sunday Los Angeles, TODAY. J did it! The internet is great and wonderful. They gave me updates every 10K. And I could watch the feed on Los Angeles TV. Of course, they concentrated on the winners. And I was in contact with the family halfway across the world. I did remind them that the daylight savings time kicked in overnight. Fortunately J made it to the start on time. Right now as of this post, the news is fresh within the hour I was notified that she finished. I still have to wait to speak with her.

But it’s still quite an accomplishment. And I can honestly say that J has done something that I would never try myself. It’s nice when your kids surpass you. Need I say more?

PS – Spoke with her. She’s injury free but tired. There are hills you can’t see on TV (everything looks flat). At mile 21 everyone bonks and she did as well, almost walked. But then at the finish she said it would be embarrassing to be walking so she was running. Her time is average at 4 and 1/2 hours among all marathon (average human, male or female) runners in general (very nice!). But keep in mind that the winners were done in a little over 2 hours which is faster than I can ride my bike (just about). So that is a bit humbling to me. 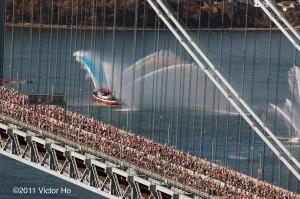 I’ve been told, that a Sports Illustrated photographer once took a spectacular photo from a helicopter looking dead on along the roadway of the Verrazano Bridge as the runners crested the apex. I’ve never seen the shot. Somehow, that vantage didn’t quite have enough detail for me. Charlie was kind enough and also excited to fly over the bridge on race day. The air space is crowed with police helicopters, so it was good that Charlie knew some of the pilots. I like this photo. Shooting from a moving platform that is moving three dimensionally, vibrating from the engine, and being buffeted by the wind, is a challenge. I used my long lens with VR setting, and shutter at 1/500 or faster. Mostly, with good light, I went to 1/2000 or faster. The shots were sharp. My metadata doesn’t tell me the shutter speed for this image.