Saudi is a beautiful country? Hot desert sand, no rain, every day over 100 degrees, strict religious rules… yes, uniquely totalitarian. Good?! Hmmm… let’s say I am happy to be home again. Did I mention everything stops for “prayer time” five times a day?

Dave learned to dive in Saudi. His sister joined us and we adventured together. They did their first night dive together with me. Scared of the dark? Nah, they were just holding hands because…. Yes, Jules had to wear an abaya! It’s a man’s world in Saudi.

No matter what, my kids can say they visited Saudi and experienced the culture for a brief time. I feel fortunate to have given them this opportunity. What memories!

When I visited Beirut the civil war was done and the center of the city rebuilt. It was clean and shiny new. It was pedestrian friendly. I walked about and took in the sights. Mosque and Church could be seen side by side. Outwardly there is no war. Sunny days prevail. Beneath the surface lingers all the old animosities. The government is dysfunctional. Religion, politics, and ethnicity all lurk as intractable barriers. You can’t see it in the pictures. Some days I wish there really was a reset button.

… who knows someone. You know? Six degrees of separation. Well, Mother Theresa is a saint now. She was alive during my time on earth. I am used to thinking that saints were all made before I was born. So there are no new ones. There are a lot of saints. And heaven help your “sainted mother.” But really, everyone has been all agog over Saint Theresa. A saint must perform two miracles. I thought three; I was wrong. It’s hard enough to do two. 1. She made a brain tumor go away. 2. She made a brain infection disappear. Neat! Neurosurgery! Whoa!? Really? I do not know the case nor the circumstance. The church has ruled. It’s a miracle! (Both!)

It’s all good with me. I thought that it’s easier to turn loaves into fish…or whatever. But the miracle for me is that I know someone who actually touched her while she was alive. And she has a relic. That would be real live DNA – a body part (gross) or nail clipping or hair or… I asked. Ginny confirmed. But she can’t find it! But I know she never throws anything away. So it’s around. Things go missing… they don’t know where Kennedy’s brain is. By the grace of god I do not know anyone who died in the WTC on 9/11. But I know people who knew people. That is too close.

There are times I am obtuse. I’m told. So it must be so. That mosque is in Jeddah and quite well known. Jules is in the foreground. We were happily wandering and taking pictures. A large group of Indonesians were organizing a group photo. Some kids were playing soccer nearby. Then, she saw the sign. “No photography!” Who knew? This is the site where they execute sentences – as in “beheading.” No need to lose your head? Stop taking pictures.

Did I mention Saudi Arabia is Muslim? And they do not allow any other religious symbols to be displayed. No cross or bible. They are confiscated. And the censors….well I was on Saudi Airlines and a scene was edited with blurred bubbles. What? It was a cemetery. And there were crosses. And all the tombstones were blurred out. Geez. Actually it’s amusing to watch censored movies. You see there is considerable latitude for the particular censor and the movie he blurred. Some will blur a woman’s bare neck. I’m not talking cleavage. Anyway, there is hardly a block where you don’t see a local mosque. My hospital has one built in and available on the ground floor. Hey! Catholic hospitals have chapels. And the minarets are striking and picturesque.

And sunsets are spectacular. A water treatment plant is nearby spewing lots of pollution. My partner always said sunset in Bayonne was spectacular because of the pollution…  The minarets all have speakers that blare out prayers at prayer time. Five times a day starting at dawn, they pray. Well, not everyone prays each and every time. But there is plenty of call and plenty of opportunity. 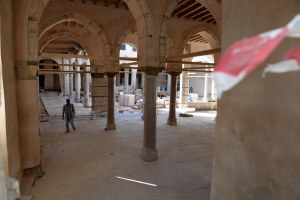 The old city has many rundown buildings. A rather well known mosque is undergoing extensive renovation. I have not been in a mosque. But here I saw the old architecture in the process of renewal. The columns and arches remind me of the Moorish style I saw in Cordoba, Spain. I doubt I will be allowed inside to film after the renovation so this was a nice glimpse.

I’m sure there is a name but for the sake of my memory it is the blue mosque. It really should be plain and simple. But the mosque stands out in the rebuilt downtown. It sits among ancient Roman ruins and new churches and chapels. Though we didn’t hesitate to enter the churches, we didn’t try to go into the mosque. It just seems that there is still a little tension in the air.