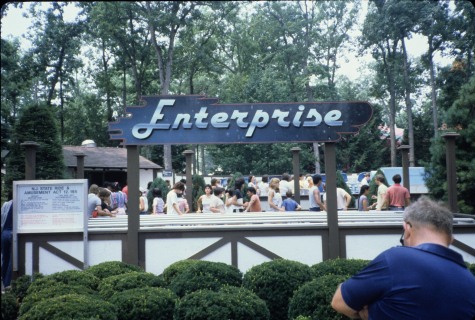 Great Adventure.  There is an amusement park coupled with an animal park in New Jersey. One hot humid summer day, we drove to the park with a couple of friends. A little wine was consumed en route. I drove and didn’t drink. The first ride as we entered the parkwas the Enterprise. My wife ever the good sport climbed into the ride with our friend Christine. Christine is the one with sunglasses. Well, no one told us what this ride was about. I knew better than to get on – motion sickness. It starts horizontally and spins. Once your red corpuscles are centrifugally plastered to the floor, the ride goes vertical. Yeah, it’s a very dizzy ride. Well getting off the ride, you would never know that my wife was ill. She just smiled wanly and told us to move on while she rested on the nearest bench. Her story continues. The park does not allow patrons to rest prone on the benches. It’s bad for business. So moments after my wife went horizontal on the bench, the park ambulance crew found her and carted her off to the aid station where relief from the humid hot weather awaited on a cot with crisp cool white sheets. Hours later we retrieved her to ride the kid’s wild west roller coaster. It was tame enough and she was eternally grateful for the respite from any more centrifugally challenging rides. The lesson learned: don’t drink wine and ride the Enterprise. Above all, never ever ride the Enterprise. 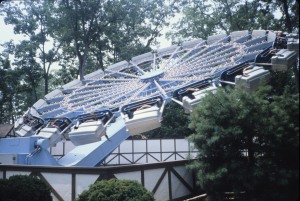 Xmas at my brother’s place sometime in the late ‘80’s – here’s an unexpected shot. It’s in my collection of slides. Who knows, but I presume I took the photo. There were three brothers, two kids, wives and girlfriends, one baby on the way.  I know we had video by then. As near as I can tell there are 8 cameras, two tripods, flash and other assorted equipment. Don’t forget the ninth camera that took this slide. Let is never be said that we weren’t taking enough pictures. I really had a laugh over this slide. Aside from the cameras, that’s sister in law Fanny, son David, and brother Eric.

It’s my Mom’s birthday today. Happy Valentine’s Day. If you don’t know or are unfamiliar, Valentine’s is a day in which everyone gives cards, candy, flowers, and takes their special someone for a romantic candle light dinner. Get the picture? It’s a big Hallmark (cards) day. Flowers – especially roses  – are double the price. Tomorrow, the day after, roses are back to the same price once again. Anyway, I am scanning thousands of slides at the moment. This shot was back in the ’70’s. I checked it out with my wife before posting. It’s not your usual shot for mom. I have obviously caught her by surprise in a totally unguarded moment. While the smile is genuine, there’s also something a little disconcerting for me. I guess I’m just not used to seeing Mom smile that way. I didn’t do any manipulation, color change, sharpening etc. It’s just a slide from another era.

Atlantic City, New Jersey. The ECAC Men’s Hockey finals were in May 2011. I have a friend Alex who is a Yale Alumnus. His team did win the whole thing. Horray! Sports photography is difficult in fluorescent lighting. Worse the light is not too bright. So the action is often blurred by slow shutter speed. You can compensate by increasing the ISO but then there is noise on the image. Everything is a compromise. Now, with all that, the ticket folks took one look at the gear in my camera bag and immediately said, “No go.” It’s a college hockey game for goodness sake! So Alex and I trudged all the way back to the parking lot, dropped off the Nikon and walked back with the Canon G11. Yeah, they let me bring that back in. So for the weekend and all the games, I used the G11. Surprisingly, with just a bit of luck, I got some decent shots. It wasn’t professional, just for fun. Here you can see Cornell and Dartmouth playing. The puck is right there bouncing along toward the crease. Cornell is quite a physically imposing team and did win. Yale is also a smaller team, but quicker.

Anyway the object is to catch the action and the puck. Not bad, also, because we were up in the stands and I couldn’t be down near the glass. But the glass would have been another problem.

There are many great shots of David. But this one is a favorite. We were at a birthday party for my nephews in Scotch Plains, NJ. It was a grab shot. The background was perfectly blurred. I had tilted the horizon to give the picture more dynamic interest. It all worked.

The image is the key. But the backstory can be fascinating. Shot at a local Church carnival. Night shots without a tripod are always tricky. I like the low angle and the juxtaposition of the bee with the ferris wheel in the background. It amazing how well the camera will correct for such a variety of lighting.