Charm? In the space of a couple days, we saw three old newspapers. It was sobering. I did not look for them. They popped up in our browsing in antique stores. It’s my generation. Someone lamented when the Beatles broke up. And there are a couple generations since who can ask, “Who were the Beatles?” The other Kennedy was Robert. Yes, shot dead, too. I am still sobered. I was in Junior High when JFK was assassinated. I have often wondered how different history might have been. 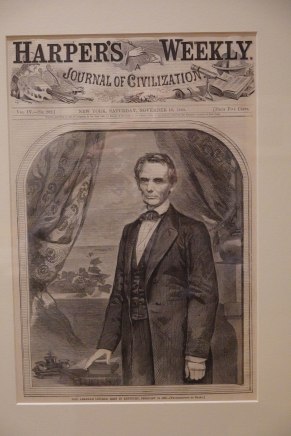 Winslow Homer. There was an exhibition of his interaction with photography in the mid 1800’s. Mathew Brady took a picture, yes with a real camera and film, of Abraham Lincoln. And Homer adapted the image in his illustration of Lincoln. He embellished – he added a presidential background. And he did cosmetic surgery worthy of any Photoshop tech today. Homer filled in the hollow cheeks and sized Lincoln’s ears downward. It made for a much better illustration. It was circulated around the time of Lincoln’s inauguration. Did Lincoln mind? We have other presidents who are vain. I can think of one off the top of my head. 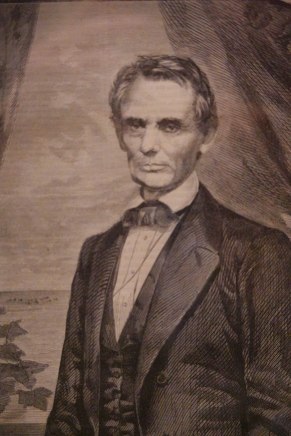 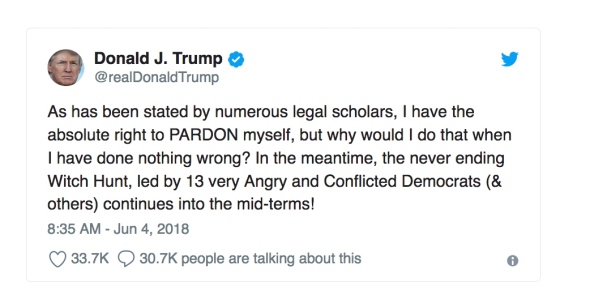 I’m a democrat. Even if I weren’t I would be now. What’s this asshole doing? I am ashamed that he is president. I am ashamed that he has a forum. I am aghast that he has an avid following. The rest of the world shakes a collective finger (middle) at his antics. Enough is enough. Vote! Vote to impeach his sorry ass. I’m not very conflicted. You were an ass before you were elected. You are still. It might be better to remain quiet and let history disgrace you. Infamous? You bet. No more neutrality. You know where I stand. And, no, you don’t get to break the law!

Seen at the newsstand

It’s Halloween. Everyone dresses up in a fake costume. Horrifying. Who knew? It was this time last year that I jeered at the costumed caricature of our fake president at a Halloween parade in Rehoboth. Surreal! The horrifying nightmare continues. DT’s supporters remain unswayed by his antics. To be sure you have no doubt how I feel about our fake leader. Let the Russians loose and hopefully the story is not over yet. One cannot afford to be timid lest the Taliban, al qaeda, and the Nazis prevail. You cannot afford to be silent while a madman runs loose. Did anyone else read the Emperor’s New Clothes?

In the same booth of political memorabilia were the four men depicted here. Interesting one and all. Three were presidents. If you need to known who they were, then you are too young to remember. Goldwater ran for the office but never was elected president. He was considered way to radical in his day. Sadly, he’d not be considered too radical here and now.

Obviously not my picture: Melania Trump. It’s readily available online now. I sincerely sympathize with their 10 year old son who must this moment be attending an exclusive private school. “Hey, we saw you mom online!”

I think I have seen enough. Nothing to hide? Fake too? I am definitely way not PC here. There are those among you who have an opinion about Donald Trump, presidential nominee of the USA. And there is Hillary…. For me, he is a buffoon and I deny any association and am ashamed that this clown is actually running for the highest office of my country. And see the Youtube of Obama at the National Press Club in 2011. Am I biased? I have largely been pretty laid back but push comes to shove. I think that no one can remain on the sideline any longer.

“The 15% figure for full literacy, equivalent to a university undergraduate level, is consistent with the notion that the “average” American reads at a 7th or 8th grade level which is also consistent with recommendations, guidelines, and norms of readability for medication directions, product information, and popular …”

I was reading at 12th grade level in grammar school. I did not care nor notice. It was simply a fact based on a test. And I was too young to comprehend its meaning. It means I take tests well. Are there so many people who just don’t get it? Even with a lower reading level, there is comprehension on some level, right?

Nonetheless, I believe social propriety has been damaged by the full nude post of a nominee’s wife in a prominent NY newpaper. Violence and outrageous behavior has become the fabric of the news. It’s time for civility. American politics is on display as dysfunctional and unacceptable. No one should be permitted the socially outrageous behavior that Donald Trump has exhibited. I do believe that common sense will prevail. I believe in good. And I am saddened by the state of the world. Massacres occur regularly now in multiple venues and multiple countries. Enough! And though I may draw criticism for this post I believe that reason must be expressed. I grew up civil. I still believe in good. Stand up! If you stand by they will come for you someday too. Donald Trump has pressed enough buttons. I do not see any merit in letting him get near a nuclear one.

My son was in Portland on the day Trump appeared recently. This is his photo. He’s riding from Brooklyn to Nova Scotia by bicycle. I know this exact spot having been to Portland myself many times. It’s a hell of a bike ride and I’m proud of him. He thought enough to send this to me.

9% of all potential voters selected Trump and Clinton. All of the rest were on the sidelines. Many – children – and others will not vote. For all of the rest, it is not an option to let someone make your choice. Let us talk once again – of hope, not fear. Vote – hope, civility, peace. Haven’t we seen enough?

(I never tweak a post after it’s written. But, for my republican friends, shhh, there are a few: Please don’t vote for a man with a bad ‘doo so he can make doo doo on us.)