You want weather? I saw weather. Unfortunately, I cannot demonstrate here how absolutely breathtaking it was to drive through. It was dusk. The rain all day lifted enough so that there was no fog at all. The air was crisp and cool. Moist. The sun peeked in from the right and shone under and against the clouds. How special? People were stopping to get photos with their smartphones. We got a full rainbow. I can only show you half.

The clouds were changing rapidly. The light was fantastic but only for a few fleeting moments. Free show! And then it was gone. The clouds were so ephemeral. Storm clouds were still gray with rain to my left. It was nature at its most awesome. Enjoy the show. I wish you were there.

I lived in Manhattan. It’s special enough for many people. I lived in midtown, that would be near enough to Times Square to see the glow of the lights at night. Occasionally, just occasionally, there would be a spectacular sunrise or sunset. It didn’t happen often. And rainbows are not seen to often either. I was glad to have a camera on hand. 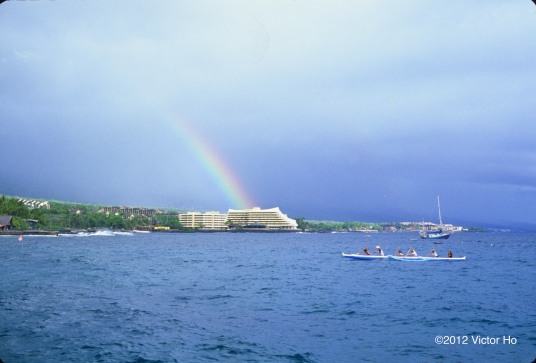 Kona, Hawaii, the ‘big island’ as it’s called, is the biggest of the Hawaiian islands. Surprised? The Hawaiians also pronounce every letter. Did you know that? Try it. They really do sound every letter. Kona is a big game fish center. Each day at the dock toward dusk, all the boats return with the days catch to be weighed and then stuffed as trophies. They caught some big fish in those days. One might think that all the big fish have been caught by now. But it’s a big ocean.  I’m talking 500 pounds of marlin. It’s big. I once caught one of 80 pounds and 6 feet length. It was catch and release. That’s another story.

Anyway back to this picture. We visited in 1984. Standing on the dock at about 4PM I could look across to the Rainbow Hilton. Yup, they called it that name. Why, you ask? Ah! Because of the rainbow that’s there. Everyday at about this time, it rains. And, standing on the dock, you get a great rainbow that lands right on the Hilton. Pretty neat trick if you ask me. You can also get a full rainbow, but this picture makes the point. Neat isn’t it?

A few weeks ago, I had been wakened by several early morning phone calls – hospital stuff. Abandoning the thought of sleeping till daylight, I found myself looking up to see a spectacular dawn breaking. The orange hues lasted mere minutes and I had bonus rainbow! This light is very precious, it occurs so infrequently. Maybe it’s because I am asleep at dawn most days, but I think not.