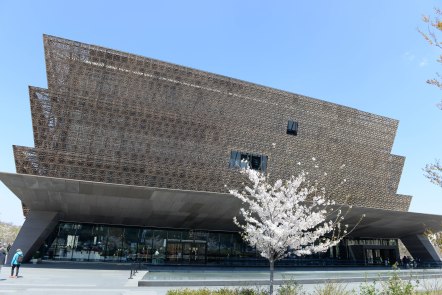 Yes, it’s free. But that is not the only reason we attended. It opened about two years ago. It was pretty moving. I learned more than I wanted to know. For instance, the ship model cutaway shows slaves stacked like cargo. Exactly. And it was assumed that there could be as much as 33% loss of cargo during the voyage. Really! I never knew the inhumanity. And it was not confined to a single country. Multiple nations took part and profited. The suffering was enormous. I can admit that this was not something taught in any school I attended. History is written by the winners. The losers don’t get much mention. I’m truly saddened and appalled.

Reflection – reflecting pool/waterfall. It was on the list of places to see in the museum.

This cutaway model shows how human cargo was stacked/arranged for the long voyage from Africa to the colonies. I was shocked. Somehow, i never realized the utter lack of regard for human life. I am ashamed at my ignorance of human suffering. I am sad.