Here’s an iconic picture I’d wish I had a do over. It’s actually an historic memory. I’ll explain. I took a photography course with the International Center for Photography, one of the only two courses on photography I ever took. This course was game changing for me. I learned the technique of bounce flash. That’s another story. The instructor gave us each a roll of Polaroid instant slide film. The purpose was to get immediate feedback rather than wait for film development. It was a two-day course so a long turn around was not an option. I experimented with the excess film. “The smile” was the result. Unfortunately, the film media is crap. It does not scan. There is nothing you can do if your film is awful. The product did not last long on the market. Meanwhile I have this great shot and can appreciate the image but not as much as if I had shot it on proper film. Salvage strategy? The slide scanner had too many defects in the reproduction. What to do? I went to the bag of tricks in my head. Problem solving by experience and experimentation – photograph the slide. Yup. The reproduction lacks detail but the result is a smooth transition of color without the lines and grain of the film overwhelming the picture. It worked. At least it is less worse. I can live with the result. 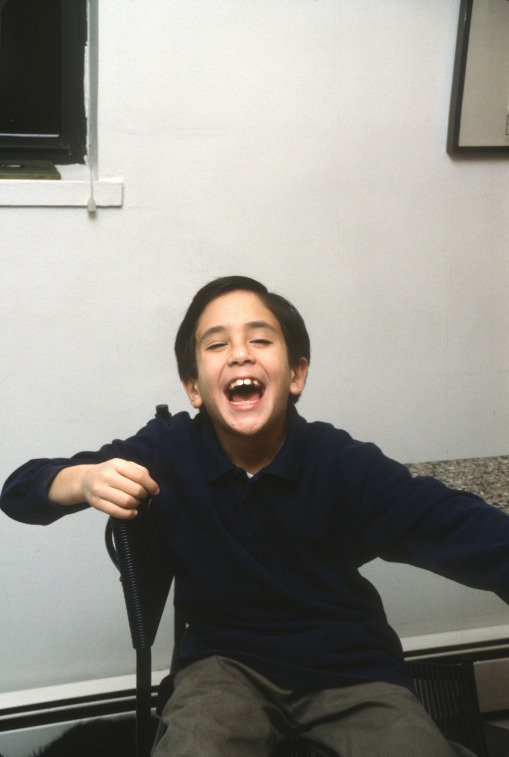 The follow up: David and I remember this shot. We tried to recreate it again years later. It’s a good photograph. But it’s not the same as the original in its spontaneous smile and warmth. Close but no cigar.

It’s that same trip to Africa. We were camping. Gee, all the sudden I got camp memories. I’ve been a Boy Scout. Tent, no running water, no shower, open fire, sleeping bags… This was not too shabby at all. The tents had a floor and a cot and blankets and screens and a porch…. The Masai escorted us to and from the dining tent. In the dark it was a possibility to be attacked… by lions. Oh my! The morning we departed I shyly motioned for a picture. Soon enough these guys all rushed to be in the picture. All smiles and delighted to have their picture taken, I was surprised. I usually am not so straightforward to impose upon strangers. And their enthusiasm charmed me. I was searching for that African jump image. This smile one always brings a fond memory and smile to me. Yup, a highlight image!