Present – on that day

World Trade Center 2000, the millennium, we (Lisa and I) visited the Battery and went to the Statue of Liberty and Ellis Island. We saw the names of our forebears who came to this country as immigrants.

2001, a crystal clear blue sky autumn day, 9/11 stands out so clearly. This is the view (my pictures) from my kitchen window. Yeah, I was close, not quite there, but close. The images are searing. When the first tower fell I was on the phone with Vicki. She told me, what my own eyes could not believe. The first tower had collapsed. From this perspective the towers appear next to each other and I thought the flames had jumped across from one building to the other. I could not fathom another plane hitting the other tower. I was fully confident in NYFD to put out a fire. I had seen them do it with my own eyes before. The towers were shrouded in smoke and steam from the dousing water and would reappear when the smoke clears. i waited in vain all day. The smoke never cleared and the buildings were gone – forever.

Twenty years later, I still have a hollow feeling in the pit of my stomach thinking of the profound loss. Another generation has grown up to see the pictures, and the war in Iraq and Afghanistan. We extracted a pound political pound of flesh for the heinous damage. Bin Laden died. Little has changed. The world is not a better place. It is not safer. Extremism, especially in politics is worse. We are less united. And, we are still dumb. The recent drone attack in retaliation for suicide bombing at the Afghan airport appears to have hit bogus terrorists. Pound the shit out of something to make us feel strong! History repeats. Will we ever learn? Lie to me, baby – again. I take no pride in saying I was “there.” 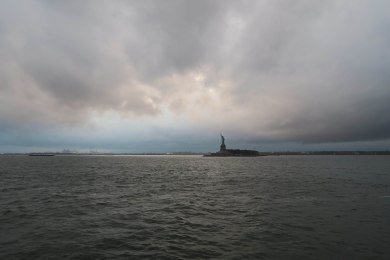 She’s iconic. You see her for free if you ride the Staten Island ferry. Free. The ride is free. Just show up. There’s the usual crowd (mostly commuters). So, there is plenty of room at the rail. We did it. I had business in the city. It’s a grand ride. I wish it weren’t business. When you fly over her the pilots all refer to her as “The Lady.” Yup, that would be about right. 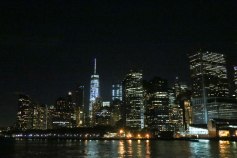 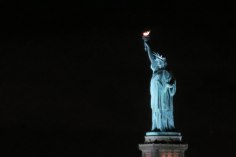 New York harbor, nighttime, the Staten Island ferry, it’s all for free. Yup, no fare, it’s free. And it goes right by the Statue of Liberty. And you get a nice view of lower Manhattan. You see the new Freedom Tower. For all of this you simply cannot beat the ride. The bonus is the night ride which gives you the lights of the city. It’s pretty special. Just get on the boat. 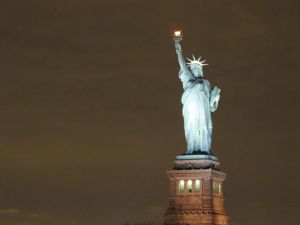 Got this shot? We rode the dinner cruise on World Yacht. One buys tickets and signs on for dinner. The route takes you down the Hudson River past the “Lady.” The challenge is that the boat is moving and the shutter speeds are slow. But you can do it. Just shoot a few extra shots to be sure one comes out sharp. Alternatively you can take the Staten Island ferry for free. Yup, free. And you pass close enough to the Statue of Liberty to get the shot also. You could even bring a sandwich. 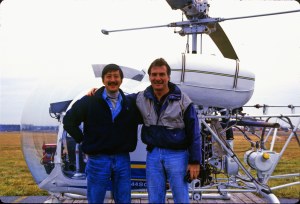 Do they even say that anymore? But do you want to know what my fantasy has been? Yup, helicopter. Well, at least one… others – scuba, but you knew that. And the best would be to fly over your house and get an aerial. Silly, but fun. 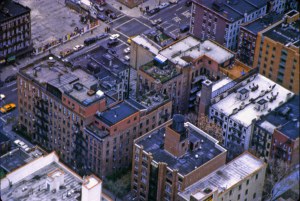 I had the good fortune to have made friends with Charlie. He had a Bell 47 (MASH, TV/Movie) helicopter. I had taken care of his mother while she was hospitalized. He invited me for a ride and the rest is history. Carol and Ginny were deadest against my adventure. Lisa didn’t want to know. (She knew I was going no matter what.) They were worried because helicopters crash. In fact I one day saw a helicopter crash. I was driving up the Westside highway and a helicopter dropped down over the Intrepid Space Museum (aircraft carrier). I didn’t know you could land on the ship. They didn’t. The pilot and air traffic reporter were both killed by a catastrophic engine failure. I’m still here after many many hours in Charlie’s ‘ship.’ 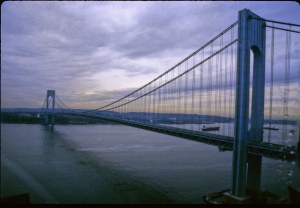 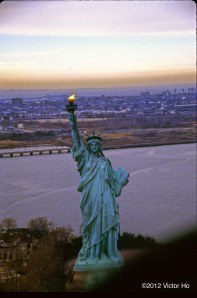 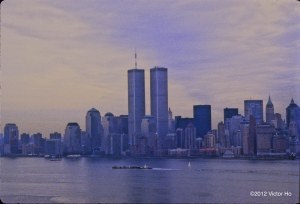 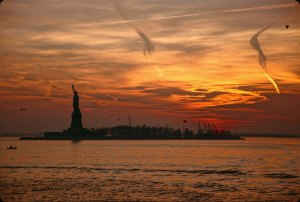 Of all the places I least expected to be it would be on the ferry to Liberty Island and Ellis Island on New Year’s Day in 2000. I had not been there before nor since. It was Lisa’s idea. Sometimes I just don’t know what she’s thinking. Correction… most times. She had contributed money so that my parents and her grandparents names were on the wall of immigrants. We searched out their names. I took pictures, of course. The wonder of it was why we were there on this day of all days? The bonus? What a spectacular sunset! You just don’t order up one of these everyday. Yeah! It was pretty memorable. (Note: This was film. No manipulation. Priceless.) 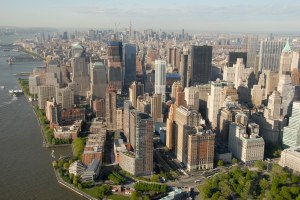 Until this day, I remember the assasination of JFK as the sentinel historical tragic event in my life. This is the second. 9/11/82 happens to be our (Lisa and me) anniversary. This many years later 9/11/01 still makes me silent with the pain and the loss. A couple years ago Charlie and I were in the Bell 47 over lower Manhattan making a scouting run for a photo shoot he was to do a few months later. The ‘tower’ can be seen under construction but not yet above the surrounding skyline. 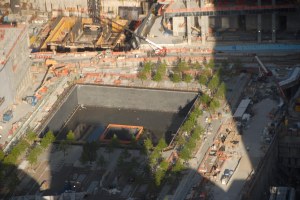 I got an aerial of the memorial fountain. It has since been completed. 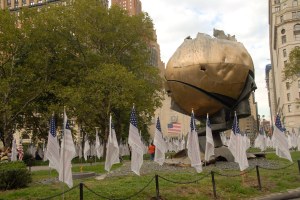 The damaged globe is in Battery Park and waiting for disposition. It’s not supposed to be permanent in this present location. The flags were memorial flags for the 10th Anniversary of the disaster. The victims’ names are printed on them. 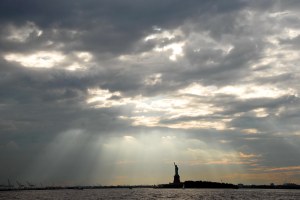 And I include the “Lady” because I took this image on the eve of the 10th Anniversary, when I walked through the area with cousin Amy. Hope. And of all things, it happens to be my anniversary. But I married on that date long before it was infamous. 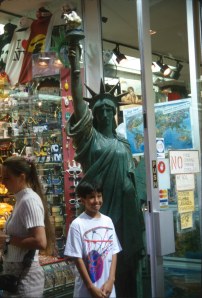 If you can’t get to it, the statue will come to you. Tourist trap – the good news is that we are just using it as a backdrop. You come to NY and you bring home a replica of the Statue of Liberty. 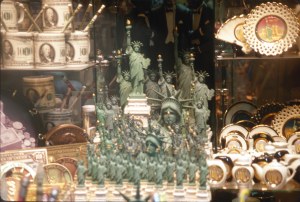 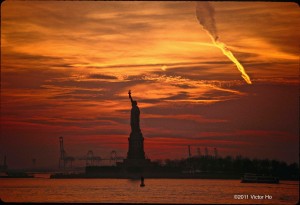 New Year’s Day, the new Millennium. January 1, 2000, Lisa decided to visit Ellis Island. It’s the only trip we have made there. She put up the names of my parents and her grand parents on a wall of immigrants. So there we were looking for the names and photographing them. All the spelling was correct. Afterward we headed back on the ferry to Manhattan. A spectacular sunset was in view looking back toward Bayonne, NJ. An old friend used to joke that the sunsets were so spectacular because of all the industrial pollution. Whatever the case, it was a deeply colorful sunset. At least I know exactly where I was and with whom.