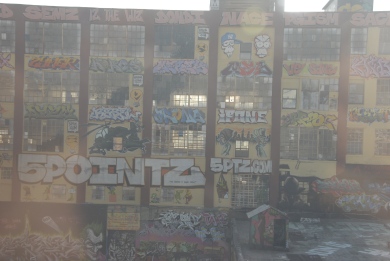 This was an eyesore series of buildings seen from the elevated subway by millions. The owner let the abandoned building stand (decades) waiting for the value to be more and then enough to be of value to develop. He just didn’t care about his abandoned buildings enough to maintain any semblance of care. Graffiti covered the buildings and reached legendary status. Then the fight began.

New York Times 2/12/18 – Judge awards 21 graffiti artists $6.7 million judgment for destroyed graffiti art. The owner/developer destroyed their art on his buildings. I can see (pun) the arguments from both sides. Isn’t graffiti unwanted art? As in, we see it on the subway cars and the MTA cleans it off. (I took these images from a subway car.) This stuff has collected upon the buildings over the years. The buildings were abandoned and awaiting development. The art is on someone else’s property and was done without permission. There is an act – VARA – Visual Artists Rights Act. Yup! There is! Oh boy. ‘Nuff said!

The story? Mine? I saw these (buildings/art) long after I rode the subway with any frequency. I got these images on the way back (not going to) from an event in Queens. It was August 2010 and it was with my trusty Nikon D200. My digital files are scattered/organized. The database is lost among backup hard drives. Voila! First, I had to look through my database. The key word – subway. I would not have listed it as “5Pointz.” Then cull the index word. I’ve taken pictures on at least two occasions. Once would do it for my purpose of finding an image. It’s art that’s gone now. I remember the controversy about destroying it. It was fun to see from the train. It was placed illegally upon someone’s wall. It became legendary. The owner repurposed the wall. The art is gone. It’s worth $6.7 million. It was there long enough to be considered valuable art.

Silvercup? This is a bread factory sign overlooking the Queensborough Bridge. As a kid we drove to Manhattan via this bridge. Each time we passed you could inhale the wondrously enticing smells emanating from the plant as fresh bread was baking 24/7. The place is a movie studio now. The sign has been preserved. It’s right next to 5Pointz. Signs are covered/developed/destroyed all the time. The argument here is/was a true conundrum.

Hey! I got an image that’s (art) gone now! I found it in my archive in short order. Sadly, I knew I had the image and it was indexed in a way that only I know. Shortly no one will be able to access this stuff without looking frame by frame. That would be 200, 000 plus (>300k) images. Nope. …it ain’t happening. Hey?! Are my images valuable? Nope. History. 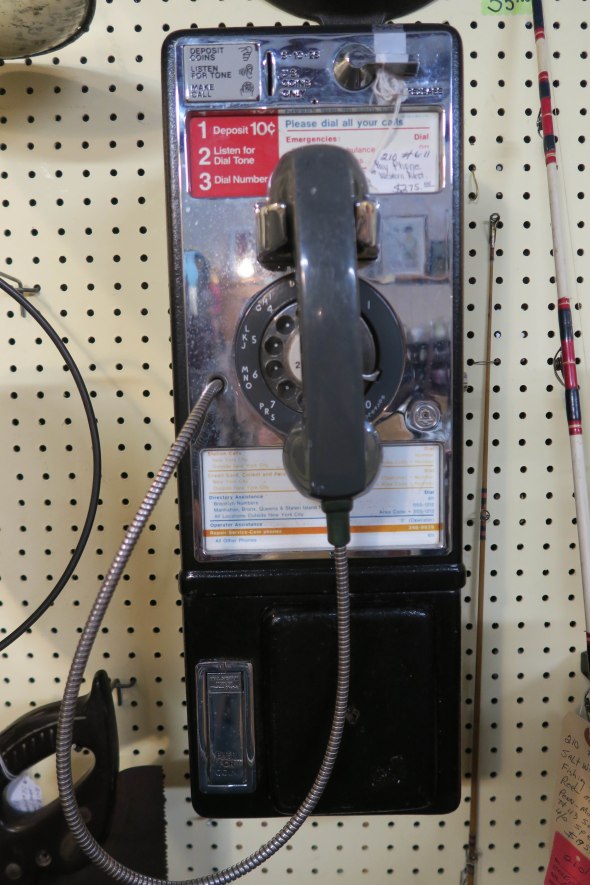 Pay phones! My whole young life the pay phone was a dime. Ten cents. I didn’t use them much. The NYC subway was 20 cents fare when I first remember riding it in 1966. And gas was 28 cents a gallon. Now they sell pay phones for hundreds of dollars. Ha ha! Most of the phones don’t have the price of a call on its label. I would have to say that I remember dial phones that had no letters on the dial. There were no exchanges and my phone number was four number digits that the operator connected. Yes, I spoke to a real live operator. Exchanges followed. And then area codes. And finally, it became a requirement to dial ‘1’ first. Progress.

I’m headed for the uptown train. It’s a mystery to me how the eye picks up small things. Lisa has always said you can tell a guy by the shoulders. Then look at the hips. And there are clues in the adams apple. The folks on the downtown track were lined up rather nicely for this shot. All I had in hand was the iPhone. I think it’s in the hips. They’re just too narrow – no ass. Anyway he didn’t look like a she to me. 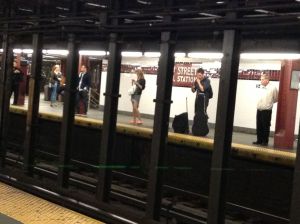 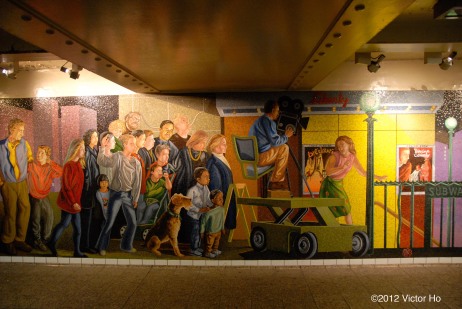 For a while now New York City has tried to make the subway a bit less drab and dreary. There is still a lot of noise, unnatural smells, garbage, and rats. But it is a bit better. Really! There are rules about photography too. This is after 9/11. They always announce that large packages and bags are subject to random inspection. I’ve never seen it happen. And people are about photographing with iPhones and cameras. Still, I’m sensitive to avoiding official hassle. I was on my way to Coney Island for the Mermaid parade. Since my camera is always at the ready in my bag, I pulled it out, shot this, and replaced my camera in about a second. There’s something to be said for improving the subway experience.