Wasp! I got great detail! My luck! I’m still waiting to get one in motion – flying. That will be quite a trick. I’m casual not crazed. So it will indeed be luck if I get a wasp in flight. Meanwhile, I got detail. Nice! He stood around while I got my shot.

Some time ago – many years – I started this blog. Photography was my passion. I never pandered for followers. There are a few hundreds who have come and gone. A few follow along at any given time. There are silent followers among friends and relatives. You know who you are. Ginny, Susan…more. Thank you. I am public and my thoughts hang out. Sometimes way out. Sometimes humorous. It is a picture into my life in photography. One (a few) pic and a short story (very long caption), it jumps forward and backward. There are no brakes and no editor other than me. Unfiltered.

To all of you who follow along – Thank you. 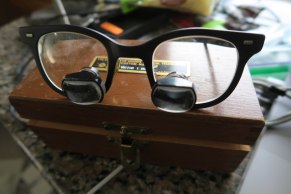 I was on the hunt for a hard drive that held missing image files from 2007. Right?! Things disappear. Certainly, memory fades. I am always appreciative that computer memory is forever. GIGO – garbage in garbage out and all that. And, hard drives fail – always. But, until they go bad, what’s stored is there. My memory decays and degrades and I forget. I wonder what the memory of the human brain…. 2.5 million gigabytes.

Which brings me to – stored in a random storage bin: surgical telescope? I never called them that. “Loops.” It was magnifying lens through which you operated with a magnified surgical field. So, it was binocular magnified vision that was soon supplanted the operating microscope. They were popular just before the microscope took over neurosurgery as the go-to instrument. Dr. Fred Epstein, my pediatric neurosurgery mentor bought every resident a pair. It was his kind gift to us all. I just want to remember his kindness and remember him today as I look at the glasses I hardly used. They were a significant expense and much appreciated. When I graduated the program Fred also gave me the latest (at that time) six volume set of Youman’s second edition (now 6th). He was a brilliant surgeon, teacher, and mentor. In my own career I never forgot his kindness and often I gave back in small ways to people who worked and trained under me.

I am stuck. The blog has begun to dictate to me. I take photos underwater and compose snappy posts. Lately I am taking photos or not based on whether they are blog worthy. So, here is my confesstion and a start of a new day.

I’m not a comic. And it started as a blog to tell the story behind the photos I take and have taken. And to all who read and follow thank you. I have appreciated all of you who follow. I have been lacking in expressing my thanks and only a few of you today will know that. All the followers do not read on any given day. But to you all, thank you for reading and following. I do not believe that this includes my kids or wife at the moment.

Funny. Lots of stories about them and … Suffice to say I was warned about embarrassing my daughter. I will recall to you that she sent a plaintive email telling me her students had stalked her online by searching her first and last name. The great “Google” put her name and mine together and voila! She was there for all her students to see. So now she is referred by a nickname only.

Gmail reads my stuff too. I was asked about forgetting to add an attachment. I had referred to something using the word. And before I sent, they asked! Is the government breathing on the other end of my ‘net connection?

An electric car now drives by computer and sensors without a driver. It’s safe. It had one fatality and everyone has called for the death of the driverless car. Let’s say that human error has resulted in way more death. Shall we remove humans and be safer? Ah! The rub!?

So never in my life, and it has been a long and opinionated one, did I ever imagine being a cat person. Nope, never, don’t like ‘em, don’t want ‘em. They are not affectionate and don’t come when you call. No tricks. No particular entertainment value. And no one says, “What a pretty cat!” when you walk it. I guess it’s ‘cause you don’t have to walk it. Ah! Litterboxes are so much fun!

So to post now and again about Lulu has to the delight a number of people who have known my dog – Reggie – and then – Nellie, two Cavalier King Charles spaniels. Royalty. Dogs of kings and queens. Lulu – pearl in Arabic – a mutt of no known family – feral living in my compound behind closed walls, adopted me. Yes, she came inside one day, escaped once or twice, was set free a couple more times, but has now settled in as the ruler of my villa. She has been in all the bedrooms and has dusted. That is to say she has raised all the dust and moved it into the room. I might have to dust the rooms after studiously ignoring the fine layer of evenly distributed dust since I moved in.

She squeaks, so her middle name is “Squeaky.” Otherwise she never speaks. She alternates swatting and swiping, with purring and sleeping. She has explored up and down. I am not cat proofed – until now! She loves wire and string. She is not allowed to eat my phone charger. She especially loves the end of my iPhone charger wire. You know, the lightning connector. Yeah, now my wires are all tucked away.

Lately she has taken to sleeping in my desk chair. She climbs on my desk (very messy and you don’t get to see…). There is barely an open square inch. She does not step on my keyboard. And she plops down and gazes out the window at the compound below. My window is the only open one in the whole compound. At night all the curtains are drawn shut and not bit of light escapes. Come to think of it, they stay closed during the day too. I am now owned by my cat. She adopted me, she came in, and now she runs the place. Yeah, “What me?” owner and cat.