No, hardly the NYT. I’d never pass proofreading. Nature. Remember the nature shows that brutally depicted lions taking down a poor animal and shredding it on camera for our initiation into “survival of the fittest?” This spider did brain surgery first. Logic or convenience? It ate the bee? Starting at the head. I got my initial shots and later on was amazed that there was very little left except for some disconnected bones. Nothing goes to waste. You need a lot of energy to spin a web.

Wooden thread spools? We got a jar…. somewhere, at some point, in the past. Why? Dunno. Colleen went through it looking for pink thread. She hates pink. She got sidetracked, as often she does, and looked up the names. Some of these spools date back to the 1800’s. Really?! Well, for sure they stopped making wooden spools a good 50 years ago. How’s that for useless information I did not know I needed. Antique wooden spools, imagine that?

Bad day: tell me, based on the damage and position of the vehicles, how this accident occurred. Did someone do a 180 or 360 circle? We passed this accident. The gray car was second along the road. No time to get a proper photo. I was not trying to hurt the feelings of those involved. They were already having a life changing moment and a very bad day. The damage was bad enough to stop both vehicles immediately. The position of the damage argues against head-on. Or, not? So? 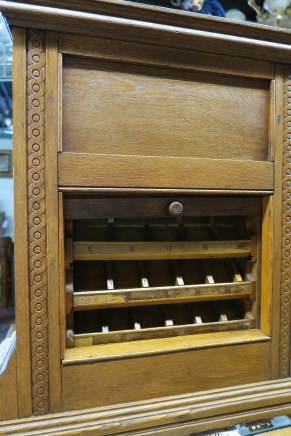 These cabinet displays with their neat compartments were for sewing stores to retail sewing thread. Sewing has not been too popular these days. Or, I don’t go to sewing stores. Probably both facts are true. I was surprised to come across these cabinets. They sell for a lot of money. I’m not sure who wants one. I think that I would like to make one. They are neat drawers of about 2 inch height. I’ve been reading up on what it takes. Soon…