57 million vaccinated – have had one shot or more

Vaccine – an actual one was developed in less than a year

Speech – a national address by our (real) leader on the 1st anniversary. trump???? who????

Covid relief American rescue package – it passed. Not a single republican voted for it. Traitors.

“If somebody said ‘N95’ to you one year ago, you’d think they were a bingo caller.” — JIMMY KIMMEL

They talk about a year ago. 3/11/20. Anniversary of corona. Where were you? Memorable? No, it just came and went as an ordinary day. I can note it/did note it, because I have a photo diary. The news and late night shows were full of the “anniversary.” The “event” (last year) was marked by the shutdown of Delaware by the governor. For us it was the evening/night of 3/16/20. All business was shut. A year later, the library opened for the first time. We did a little victory dance. Anniversary Day +1 is my second shot. I’m old. For most the first shot is months away. For others, they will be foolish, ignore the science, and decline the vaccine. What a world? What a time? The “former guy” is out of office. Sanity, truth, and science have returned. If you commit a crime, you do not get a free pass – see Gov Cuomo. Yeah, it’s been a hell of a f’n year!

What were/where were you? We learned to make Nantucket baskets and ate Thai as they announced all business was closed. The flowers were in bloom. (Not yet this year.) I was in my fake flowers/vases phase. Colleen made a “Giovanni” burger for me. The groceries were suddenly without TP! Toilet paper!?!? Patch was sleeping soundly through it all on our bed. It’s not an anniversary. That would impart more of a celebration. This was more like – “yeah, I was there. Ain’t it amazing when you look back?” Life, as we knew it, changed right afterward.

Yeah! Right! No!!! But it surely feels different. For the very first time since the TP shortage of 2020! We turned the aisle in our supermarket – the entire aisle was stocked again! Yeah, you could fall down laughing. Normal! There was hand sanitizer in three places! Three choices, all for good money. There’s sanitizer for your fruits and veggies. Ok! Get a grip! It’s good to find that supply has exceeded demand. Never in my wildest nightmares did I ever think I would be celebrating the return of TP to my local market. It could all go south. But, for now, I feel like we turned a corner.

… after all these months. I liken it to Paul Simon’s – Still Crazy After All These Years… hum it, if you know it. I still buy TP whenever I see it. Who knows when you’ll see it again. The shelves remain empty except when they are not. Bastards! I buy at any price. At some point we’ll learn the scandal behind the shortage. No yeast, either. Get it if you can. Do you read labels? The drink pictured here is flavored water with vitamins. Little Hug Fruit Barrels. Just vitamin water. 8 ounces, artificially flavored. Ah! The power of advertising! Why the empty shelves? Empty makes the demand greater or is it the other way ‘round?

Note: When I composed this post months ago, we seemed in dire straits. The shortages are less now. There is no real normal as every excursion is done with caution. We eat out rarely. We cook. Colleen has become semi-vegetarian once more. I cannot say good or bad. Different.

What’s in your grocery

Are there so few photo ops these days…” Am I food obsessed… do I live to eat? Fascinated? Curious? Nosey? It’s interesting. I don’t/wouldn’t carry my big old DSLR into a grocery. I am above using iPhone for my pics. Camera snob, that would be me. So, it’s a point and shoot. No so much a toy any longer, they are quite sophisticated and damn good. I always thought that big glass (lens) made for a better image. Nope. And so, I pull the camera from my pocket and surreptitiously shoot. I got the shot. Do/did you? No need to be too obvious.

Oh, a shout out to Barber stuffed raw chicken. It’s good. I don’t say that about frozen food. I don’t eat frozen. Why? Snob as much as anything. We have access to fresh. No frozen. Not pizza! Ever! Ha! We buy frozen cauliflower pizza all the time now. My point? You can’t find Barber for love of money since I got this one time shot.

It will be two months before this post is published. I’m wondering out loud how it all evolved. Will there be TP once more? Can I go to the grocery without trepidation and feeling like it’s threatening to my life? I predict not much will have changed. … and what the hell are all the TP manufacturers doing? Supply, demand, and profit? Gas was $1.71 yesterday (two months back).

– gas is now $2.23. Toilet paper came back. And, just now, yeast appeared on the shelves. The great Amazon could not deliver in all that four months.

I don’t want to call it hoarding. We ordinarily have bottled water on hand. It’s not for me. The cats throw up from the chlorine in tap water. And the coffee maker will sludge up from the minerals. So, we use distilled. Hey! It’s not me. I don’t drink coffee. TP? Why has everyone bought it up? The shelves are bare since lockdown began. We’re not out. We are flush. (Sorry.) I buy it anytime I see it. So far, we are a long way from resorting to Plan B. But, why? It’s all a fat hoax! And, I live in a Republican county. Did thy not believe in the “fearless leader,” and they bought anyway. It’s like they put their money on/where their…. I hope it’s over soon. I got no where to put all the extra TP we’ve been buying. 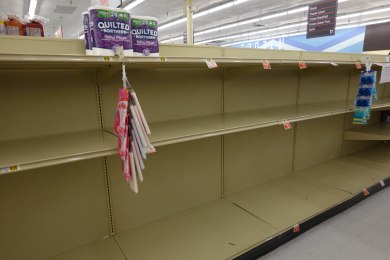 After the initial run – on water and toilet paper – it seems that the gods laughed. It couldn’t be the Republicans. It was all a hoax to them… Indeed, it was science fiction of my youth. You know, the disbelieving folks, laughing, till the monster ate their car. Folks were out and about in at least six states completely in denial as I write this about a couple month before posting. By now, I hope there is free access to TP. Come to think of it, maybe the Republicans made this sh*t up? Nah? It was short people. The last rolls were on the top shelf. Water? My cats throw up when they drink tap water. Dunno? So, we had to find bottled water. Crazy. Yup.

(Note: Meat, or, TP. YOU, choose. It ain’t over by a long shot. People are out and about. Armed protesters have been encouraged by our fearless leadership to stand in state capitals. What the f’k are you worried about. Remember when Bush Sr said, “It’s the economy, stupid.” No, it was Clinton’s campaign who coined the phrase against one term President Bush. It ain’t over and it’s not better. At all! Be afraid. Be….) 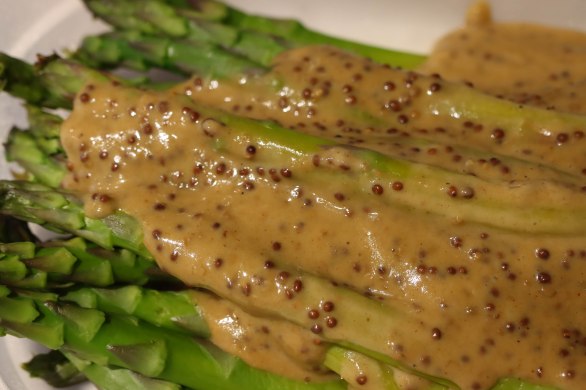 We’re home. Not much doing, so what to do? Cook. Oh, we got TP! Gotta have the essentials. Biscuits, from a Red Lobster gluten free mix, imagine that. We got that stuff in Walmart. It was an unlikely place (to find it). The real surprise was that the biscuits were really good, as in, I would buy a mix again (if I come across it). Asparagus, it’s a little early for the big thick ones. So, I peeled the tough skin with a potato peeler. Add vinaigrette and it’s pretty near to perfect without too much effort. Bacon anyone? Yeah, unhealthy. This was two pounds (fresh cut) on sale – ½ price. Wow! I just hit it, lucky. Yup, it cooks down to practically nothing. But good! And, crab cakes, fresh made and delicious. No picture. Colleen ate it before I could … yes! A good time was had by all. If they had told me, “Make a post about bacon…”

Really?! I heard there was a run on TP in the grocery. We were there for some veggies. Yup! No, nada, none. Toilet paper and corona are linked? It affects the lungs not the large intestine. I’m mystified. It’s the Democrats too. The right wing Fox media has said that it’s all a hoax and there is no emergency until this afternoon when it became a national emergency. Poor Republicans, shhhh… there’s no TP left at the store. I got. Want some? Or, as the pic indicates, there was a run on TP by short people.