You can’t go back

Once upon a time… We had a magical time. It was near this time of year. How long? Dunno.

Dave came to Saudi. He learned to dive. Jules joined us. They experienced the Red Sea. It has been largely forbidden to tourists. I got them in under my work visa as family. They did a night dive. It was special. The fan coral is gone now. It was destroyed by inconsiderate divers. It is always special to see a turtle in open water.

Yes, it happened once. You can’t go back. Wistful? You bet. I’d have loved to get Colleen into the water, dived, and held her hand as we saw the wonders.

We deferred having our windows washed… (Yes, I do not do windows?!)… because it was gonna rain. And, it did… for two straight weeks! Good call!

How much rain? … enough to wash away our beach.

Mother Nature is a powerful force. I am happy we got blue skies back. The window washers are coming next week. Doesn’t it always work out, that, it rains right after you wash the car? I don’t wash mine; it rains anyway. 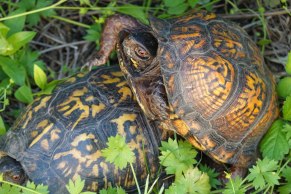 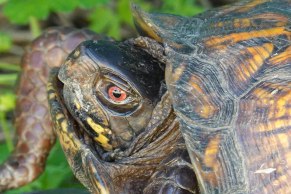 Ha ha. I was hauling mulch from front to back. There, in the side yard under the trees were a pair of turtles. This was unusual to see. I see ones but ordinarily not a pair. Yes, they were caught in the act. Once they saw me the male moved off rather quickly, especially for a turtle. Yup, they can move if motivated. This leads me to question, in the whole wide world, how does one turtle find another?

For a moment I was back in the Red Sea. Not! But anytime you see a turtle it’s a photo op.

It was a great dive.  And, don’t be spoiled. You don’t see a turtle often. Hey! It’s a big ocean. Turtles are around but hard to get close enough to photograph unless they are not moving – hardly ever. Mostly they are swimming along sedately. They do not want company. And as fast as I swim I cannot keep up. But in a burst of speed I was able to reach it and get a couple shots properly exposed. Priceless! My dive buddy said, “Wait, they circle.” I’m not sure the turtle got the message. Gee, I can still swim fast sometimes. Got ‘em! 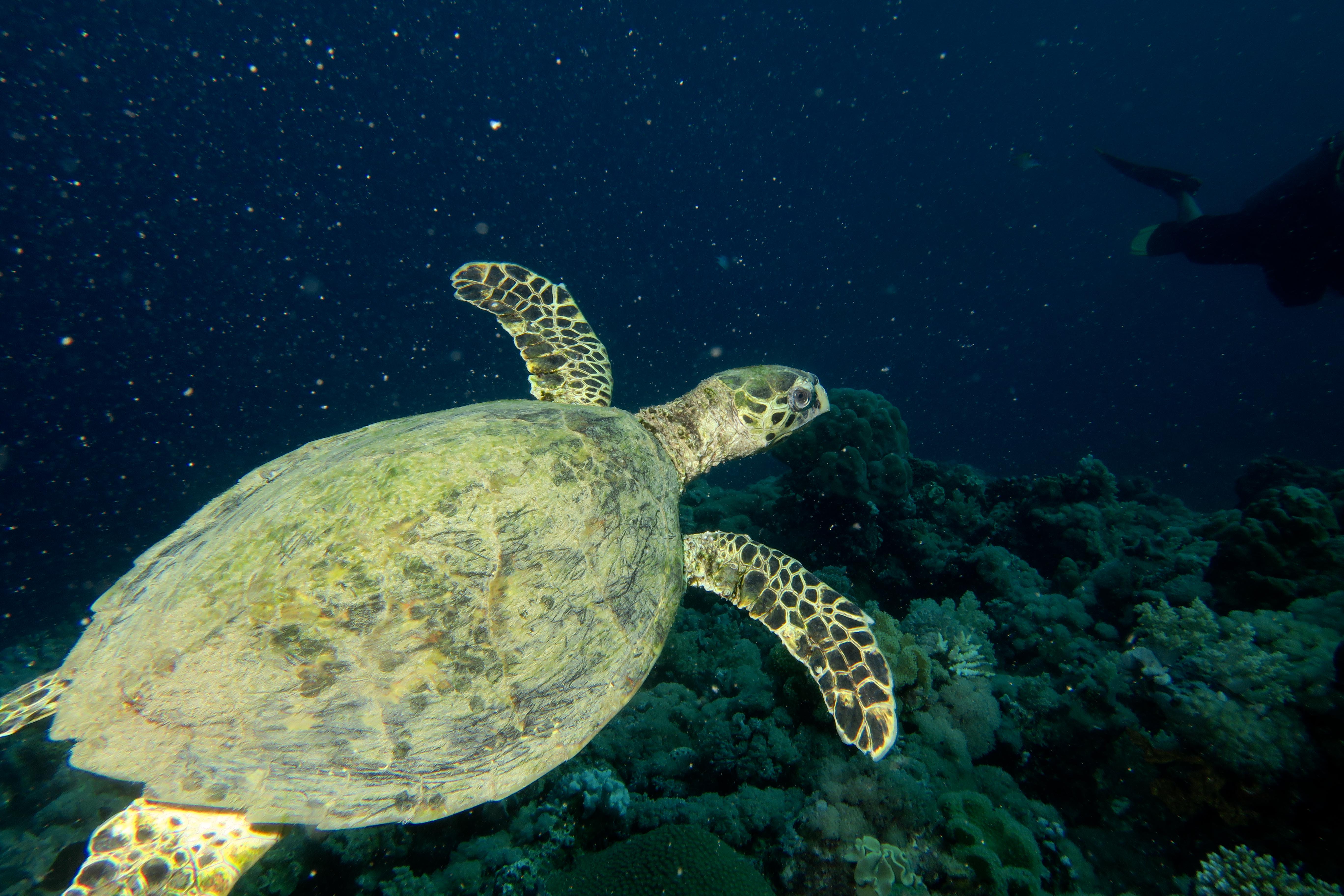 Magical! There are a few events in this very exclusive category. David had just learned to dive. Jules had just joined us. We were pretty much alone underwater. Weekdays here are empty. Just the three of us and the fishies. Omar from the last time, had shown us a nice cleft in the coral. It was idyllic and picturesque like swimming into a canyon. And with nothing but bubbles to hear, it was so calm and peaceful. Jules went into the gap first. Dave was middle and I followed. It’s like snow skiing. You keep the new guy in the middle and I watch for trouble. Jules, the one in front, blazes that path. 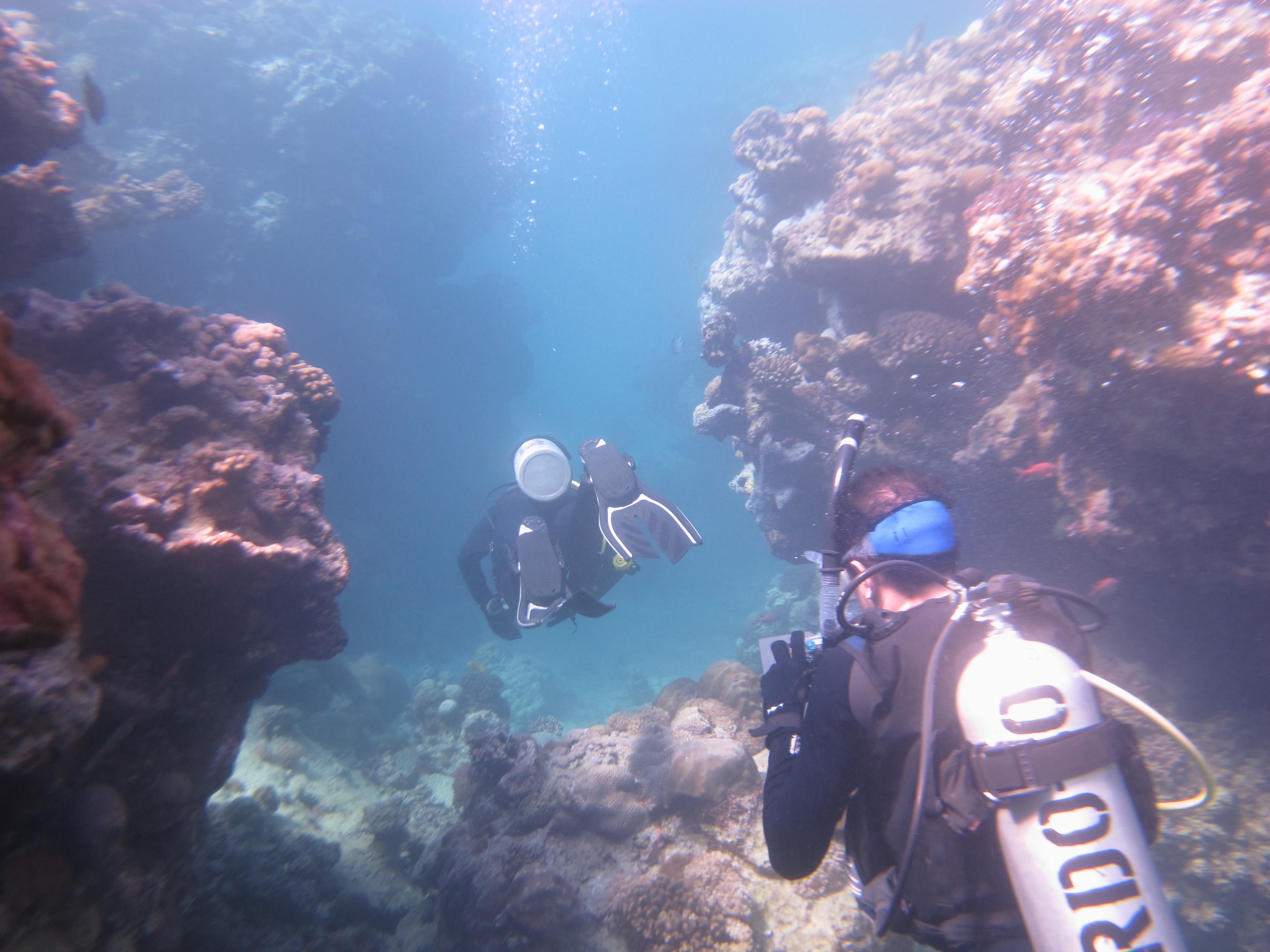 Suddenly Jules pulled up straight as though she’d hit a wall. Dave veered to the side. There! Right in front of us! A turtle just sort of sitting on the coral. Really! It was as though it was sunning itself. Yeah, it was a special moment We all got pictures, And Dave got video. And to this day I do not know if we all realize how special a moment we shared together. It had passed so quickly. Bittersweet. I can savor it in retrospect. It can never be repeated. 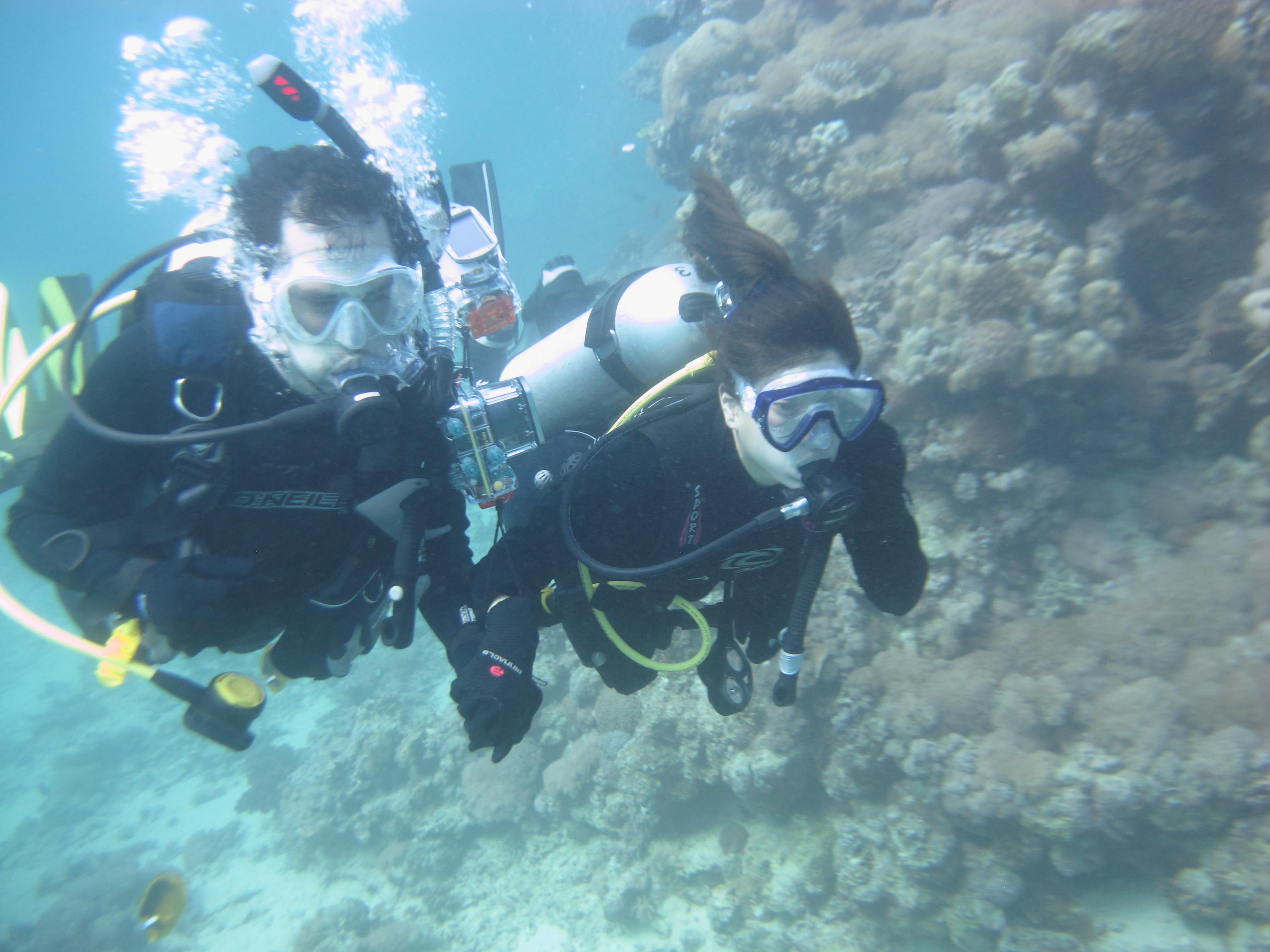 The kids never got along too well as they got older. But they stick together when they are nervous. After all, family is family. Holding hands? I thought it was touching. Jules was assuring Dave that he would be safe from me. I had and have a tendency to underestimate danger. Everyone still has their limbs…. But there was this sign at the ski resort that warned – “Are you an expert? You’d better be!” – as the kids skied under it. Good thing Jules was too small to read and comprehend till much later. But no, I’m mostly safe…. This image was daytime. I persuaded them to go on a night dive. Shhhhh..Dave had not even gotten his open water card. Yes, that was also touching to see both kids swimming, holding hands tight, and swinging their flashlights everywhere to see and ward off sea monsters. It was exhilarating but probably too much to ask my kids at that time. But hell! It was pretty magical too! 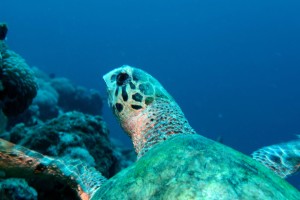 No silly. It’s two animals. Did I mislead you? I’ll switch back to land soon. I’m just posting stuff I’ve seen recently and catching up. So you land folks, there’s a change coming soon. I caught a turtle. It’s probably because the water is cooler and the animal was lethargic. We saw it and I took off to get a photo. I was actually about a foot away. No, I did not grab it or play with it. And it still swam faster than me. I was surprised to catch up. Maybe it’s my spiffy split fins that helped?

And then someone pointed out a ray. This was one of the deep water ones. You see them swimming up and down the reef. I was too far away to get anything but a taste. Someday…. Meanwhile, I have this poor image. But it’s an image…

I have lots of shots of turtles now. And, I’m getting in close too. Maybe it’s the same turtle? Familiar face? But no, this one had a barnacle on its back. But they all look alike, pretty much. And so they are common enough to yawn and not get excited. Except, they are not common to see. Maybe now and again so they remain special to sight. And they have a pattern. Like everyone else they swim away. No human encounter or curiosity for them. But they also like to swim in circles. So if you stay still, they may come around to pass you. 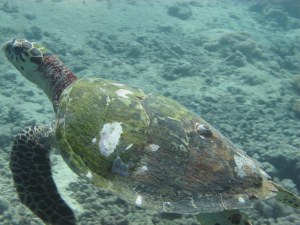 And if they do, you get a close up shot. Got to be ready. And got to have the light balanced for what mode you shoot in. Available light or strobe, it’s vastly different and you have a moment to prepare for its close-up. I never said it was easy, which is why it’s so neat to encounter a turtle. 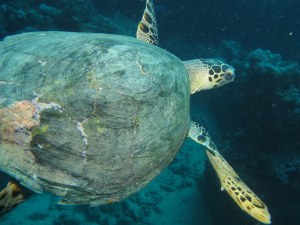 We rarely get to see a turtle. This guy leisurely swam toward us and then around me. He easily was faster and I simply spun around in place. I was fumbling for the right camera exposure. Lots of things are done by anticipating and by repetition. I needed to switch from flash to natural light. I’m better. The color balance is not quite right. The turtle was a little farther away than the strength of my flash. What the heck! I got a shot close up and good enough that I can tell this story. This is the usual way I capture an image. Unlike the recent story where the group had captured the turtle, this is their house and I am a guest. I suppose in the extreme, turtle soup; but I hope not.

Playing With The Wildlife 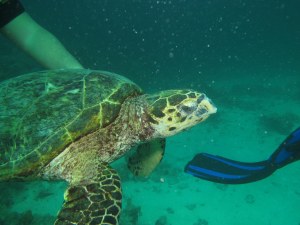 We were near the end of a dive when out of the blue (ha ha , it was a green ocean) a group of divers came at us and over passed us. The group swirled and acted frenzied.

Sure, they were playing with a captured turtle. The dive instructor made it a point to apologize for his group later. But meanwhile here I am with a reluctant photo opportunity. It would not be the same story without a picture to back it up. Sorry. I am sorry too. The poor turtle was sure relieved to escape too. 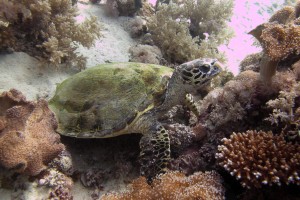 It is a rare event to see a turtle. My last encounter was magical. It was about a year ago when the kids were here and we swam with one. This time around Farid spied it. He hunted as a kid. His eye is trained in a way that mine is not. He sees things all the time that I miss. The turtle is old. The shell is all worn. Farid first saw it in the open water and we swam after the turtle to no avail. Then it swept behind the coral a coral outcropping. We approached from the right and left. The turtle didn’t know which way to flee. Farid held it. I got video and stills. Sorry kids, we played with the wildlife again. 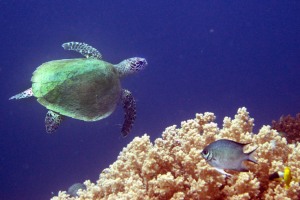 No turtle soup, it wriggled free and swam away. No video here in this post. Farid’s kids will love the movie. But the shots I have posted are the trophy of our encounter.

Swim With The Turtle 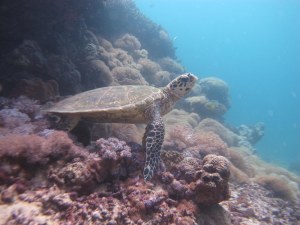 Omar, from my last story, showed J and I a very picturesque passage through the coral back in March 2013. You have to swim in from a certain direction to appreciate it. J remembered this and took David through it. I followed. As J emerged on the other side she suddenly swam upwards. David paused too. I swam into his fins.

And there in front of us was a … hawksbill turtle!!! 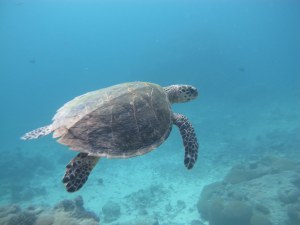 I have been diving for over a year… and one, only one time did I see a turtle.

It looked like it was sunning itself. It turned its head slowly from side to side. And then it began a leisurely swim first in toward J and then under David’s fins. I followed and got more shots. We had a fabulous ‘turtle experience.’

If we don’t have another dive together, you could count this among the most special experiences ever!!! … so far. 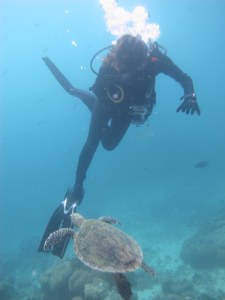 Still warming up and can’t wait to see the images. David shot movies… 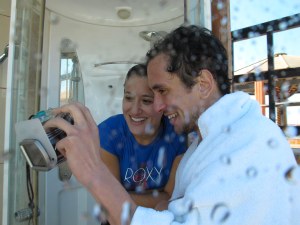