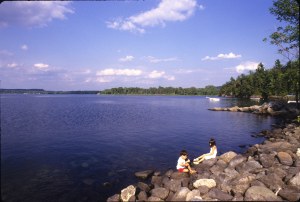 I’ve mentioned the Tyler Place. It was idyllic. At least my pictures say so. I hope that the memory my kids have is similar to the photos. As J told me when she was old enough for me to query. “I have seen the photos and the videos. So I know I was there. I just don’t know if it is my memory or whether it is the media show I remember. Sometimes I think that Photoshop and some generic background pasting would have cost me less. But a kid with a stick… priceless. 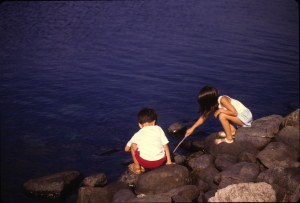 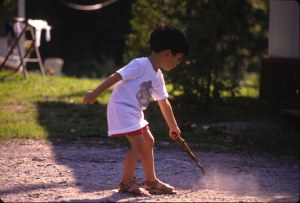 Since early memories are sketchy until around four years of age, maybe I should have kept them hidden away. Ah, but they did learn to ski before that. So even if you don’t remember how you learned, isn’t it wonderful to feel like you’ve been doing it all your life? 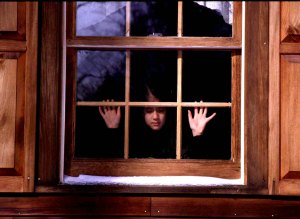 I’ve posted this picture in this blog somewhere else. But I was in this folder and consider the image and its memory iconic to me. We were on one of the ski trips that we took with our friends affectionately known as the ‘Tyler Place group.’ We all met while we had vacationed with our families at, you guessed it, the Tyler Place in Vermont. So about once each winter we skied together. My recollection is that this was a rental house near Okemo. Just as we were packing to leave on Sunday, I got this image of Julia at the window. She was dressed in black so it was a perfect image to isolate her face and hands. Yeah, you get lucky like that sometimes. I’m just glad that I walk around looking for opportunities and that I’m lucky enough to have a camera handy when the shot presents itself. As with most of my images this was not posed but it was taking advantage the moment.

I saw a picture someone took of the Blue Ridge Mountains and I remember a car ride in those mountains as a kid (without a camera). I take these shots whenever the opportunity allows. It’s the same trip to drop David off at Putney. We’re still hanging out with separation anxiety (mom). And wouldn’t you know it, there is my layered mountain scenic. It’s never the same shot I remember from childhood. That shot will be ever romantically embellished. But here’s a close second.

If you follow photo critical (see sidebar), I comment on photo technique. We had just dropped David off at Putney School for a summer art program. This is panning. I caught the little guy running across. It ain’t perfect. But then it doesn’t always need to be. And I remember where I was when I took this shot. Dave had a great time and made a girlfriend (maybe the first, sorry Dave) while he was there. And this is what I remember when I look at this shot.

This is a special shot and was my screen saver for a long time. It was late summer on Lake Champlain. We were staying at a family resort. The group decided to do the banana boat ride. This time it was kids. The boat was in motion and I juggled a film camera and a video camera, alternating shots. Both boat were in motion and any attempt at a close up, the motion was even worse. So by all rights I had no business getting this shot. If I had scripted this shot, I couldn’t have pulled it off. There is my daughter, leaning into the turn, a little extra lean, and with a yellow vest at that! If you had wanted the perfect shot with the perfect pose in full on motion… Well, I was pretty amazed myself. You can’t do it better with digital. Looking at the LCD screen can’t save you. All the kids had to be perfectly positioned. And to think I just shot one image and brought the film home to develop. The video by the way is very dizzying. Too close and the camera is moving too much. Too far and the figures are too small to make out. What luck with the film camera! Since I do this kind of thing periodically, my family tends to think nothing of it. But I can still say it was a pretty good shot. 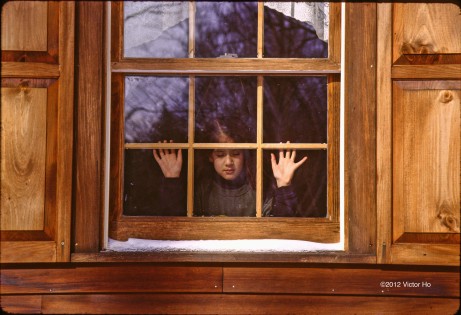 We were skiing in Vermont and staying in a rental home with three other families. I was wandering around outside on the last day just before we packed to go. Usually it the other way around as the kids would be out playing in the snow until the last moment when we have to return home in the car. Somehow, I managed to get a camera and take this shot before she turned from the window. 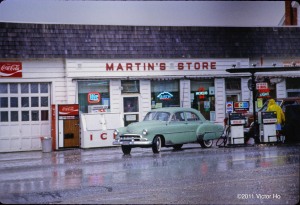 Each summer when we traveled to the Tyler Place in Vermont, we would see Martin’s store as we pulled onto the road departing the resort. And as I recall, many a Saturday departure was accompanied by rain. This was perfect since we were leaving. It’s very rural. We had little need to purchase any goods since the Tyler Place is all-inclusive. But they do have things like beef jerky and Spam… a whole ‘nother story. This day in the pouring rain, the old Chevy makes the photo timeless. 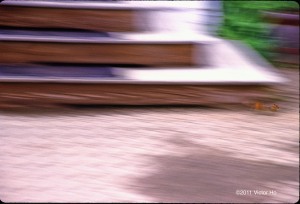 We had dropped David off at the Putney School for Art. I was hanging out waiting for Lisa. This chipmunk shot past me. I swung the camera up and shot as he scooted out of the frame. The motion-blur works for me. It’s not perfectly focused nor is the slide cropped ideally. And I could make a few other criticisms. But I still like this shot. My friends Kevin and Maryanne have a hate relationship with chipmunks whom they claim can damage your house. This cute guy was at someone else’s house.

Highgate Springs, Vermont. The Tyler Place was a family resort where we vacationed for many summers. This was 1997 and Lisa was training for the Boston to New York AIDS ride in September. I took this shot on one of her training rides. You can make out the Camelback hydration system. But mostly, you see a hill. It’s not much of a hill in a car. But, to a biker, it’s a hill that could go up and up for a long time. We hit a couple memorable hills like that during training. I admired Lisa for her perseverance and determination.