I came across some images in a catalog in a place I have not looked in a very long time. Are you following me? We were in Washington DC during the cherry blossoms and wandered into an orchid exhibit. Nice! I am frankly pleased at the detail I captured in the orchid. Technology continues to improve. I can now easily mask and enhance subject or sky. Too technical? It doesn’t matter. Amazing things can be done now in editing. It’s simple enough for someone as lazy as me. The edits are hardly noticeable. I’m better than I was and didn’t even know it. Hint: you do need a good image to start with. Oh, bother.

Ecclesiastes 3 is its biblical reference quoted by Speaker Nancy Pelosi shortly after the Capitol was attacked in January.

It’s near cherry blossom time in Washington, DC. We celebrate both proudly and not. The cherry trees were a gift from Japan in 1912, mere decades before Pearl Harbor. Only recently The African American Museum was opened and recounts the shame of slaves. It’s only a mere 400 years since slavery began in America. The contemplative waterfall within the museum is healing. And in a small display case within is a ship model demonstrating how the slaves – humans!! – were transported stacked and lined side by side within a ship’s hold. A certain percentage loss (of life) was calculated as spoilage during the trip. Stacked like cords of wood! Horrifying? Yes, our history is not always a proud one. Recently, a mob stormed the gates of the Capitol. Terrorists attacked our nation’s capital.

Contemplate: we are a nation with a complex history with a mistaken belief in manifest destiny:

“What was Manifest Destiny? Propounded during the second half of the 19th century, the concept of Manifest Destiny held that it was the divinely ordained right of the United States to expand its borders to the Pacific Ocean and beyond.Nov 18, 2020…”

It has always been easy to distinguish between good and evil; truth and lies. NOT! We do our best. Or, we do not. Largely, I would tend to “follow the money.”

“A popular current text, the King James Version shows 1 Timothy 6:10 to be: For the love of money is the root of all of evil: which while some coveted after, they have erred from the faith, and pierced themselves through with many sorrows.” – the Apostle Paul.

There is no honor in what has recently occurred. There are those among us who would subvert the will of the majority. There is much to contemplate in the good and the evil that presently swirls. Lies, truth, spin, turn, each of us must contemplate and then vote peacefully. Free elections are a bedrock of our democracy. Do not let men with guns and loud voices take that away. Liken them to Al quaeda and the Taliban; they have tried. They will not succeed. 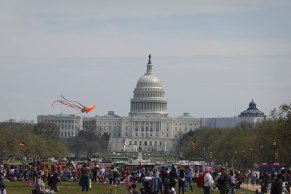 You want crowded? I do not. No longer! I live in Delaware. It’s a sparse around here except for summer at the beach. Look up. Look down. Saturday. Cherry blossom time. Good weather. It’s great to be out and about in the nation’s capital. Yup, you’re gonna see crowds. It was my norm in New York City. I like it peaceful  now. 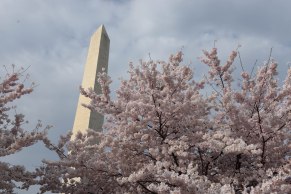 Commercial or picturesque? You can have whatever you like. I have seen the cherry blossoms twice now. Once was enough? One wonders? We did not hike all among the trees. But the crowds are large and never diminish. Year to year, the same photographers or different ones. Many many iPhones, more than any other device. But, there are cameras of all sizes and shapes. I carried two, plus our iPhone. Iphone was for uploading instantly. One camera did wide angle and the other did telephoto duty. I still think that the real glass in a camera is way better than that tiny iPhone lens. But I could be wrong. Commercial? Food trucks take advantage and indeed make lots of money catering to the crowds that come. I saw lines of people at each and every truck. Nice business if you can get a spot.

Conspiracy? The top of the monument on this bright sunny morning looked like a hood. Symbolism? There is no hate in this country…. 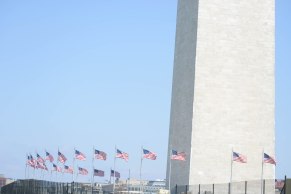 It’s cherry blossom time. The Washington Monument makes the perfect foil. You cannot miss this icon and everyone knows where you are. Flags blowing in a stiff breeze make for a striking graphic. Once again, vertical vs horizontal (composition)? Shoot both. Ha! But then you gotta choose. Luckily I can show you both.

Meanwhile it’s also cherry blossom time. The Washington monument is a giveaway of the location. And of course I want everyone to know I was there for this showing. 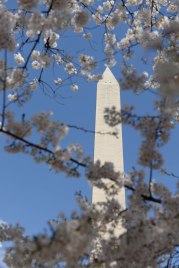 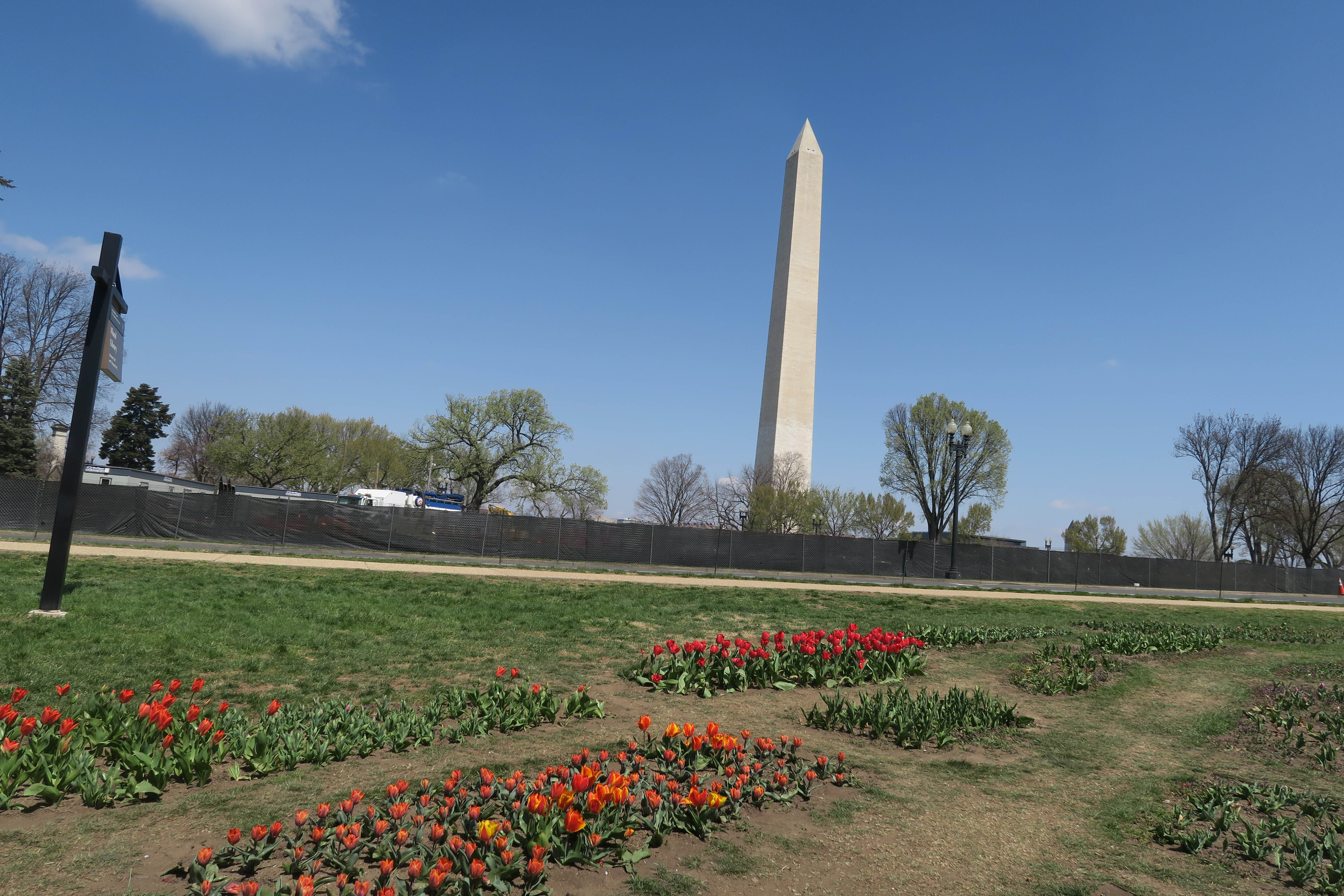 It’s inevitable that you run across construction. So, you take what you get. The tulips tell you that it’s springtime in DC. Meanwhile we were here to see the cherry blossoms. I’m just one among many (photographers) trying for a quintessential shot. This wasn’t it. But, I like the graphic anyway.

It also leaves me with a philosophical/existential question. Am I shooting to post? Or am I posting what I shoot? I thought I’d post what I shot? That was the beginning. But it’s way easier to remain in the present than the past. Hmmmm….

I tried for a shot that would stand apart from others I have seen. Nope, it is hard to do different. The lighting, perspective, and the setting are iconic so that it’s been done before. I had brain lock and did not do more than get a documentary image.

Still, you don’t give up. I got the clouds and the reflecting pool of the Washington mall that gave me a dramatic image. Sometimes the take home shot is not in the direction you are peering.