I Save The Day

Visiting Taif. You drive up mountain roads. And it seems the bus was slow. And there is a zoo which was on the list of activities and places to visit. I had a camel encounter. Friendly, I’ve heard they can be temperamental. But the zoo camel was friendly. The elephants sprayed water at you. Fortunately, I watched as a couple nurses were set up and drenched. Those elephants are smart.

The group but their banner across the front of the bus. Nice touch. About 30 minutes later the bus overheated. The driver stopped, pulled his cellphone, and called the hospital for help. No A/C, it was getting hot on the bus! Light bulb! Yeah, you guessed. That darn banner cut off air flow to the engine. We removed it and were on our way in 10 minutes. Saved! Yes, I did save the day on that one. Did I tell you I know a little bit about lots of things…

It’s world famous! Until I had been to Africa, this was pretty good. Now that I’ve had a completely different experience in the wild, this zoo is and interesting series of images in retrospect. If you isolate the animal and the background, you might convince yourself you are in the African veldt.

It’s like going to the aquarium. You can get a shot but you know it was from behind the glass in a tank.

“You touched a camel!!” my daughter exclaimed when I shared this photo. We had searched vainly for a camel to photograph when she visited in March. Yes, Julia. I got right up in its face. Actually, the camels, especially this camel, were quite used to people and did not hesitate to come right to the fence and allow me to touch it. This guy has probably been fed by many visitors in the past. I don’t know… but one could guess. No, he wasn’t smelly, and yes, I used a wipe to wash my hands. One of the nurses was carrying one and pressed it into my hand after the shots.

Sometimes I surprise myself. It’s always a problem at the zoo to get a shot without the distracting cage. I like the juxtaposition of the head and tail, obviously not the same porcupine. Call it coming and going. Otherwise this shot would have been in the discard folder. 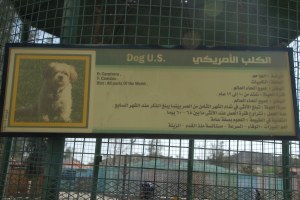 We arrived at the zoo. Simon and Garfunkel, it ain’t. It was early and we were the only group, the only people, visiting. It was pretty small and to me, pretty lame. I admit that I did not see this picture first. It was on the internet when I was doing my homework on Taif and it’s sights. Dogs!… from USA! Imagine that??!! They do not like dogs in Saudi Arabia! They are considered unclean. Cats, yes; dogs, no! But there was even a cage with cats. Meanwhile a stray cat wandered by…  You’ve got to be kidding me, right?? Please don’t stick your fingers inside.