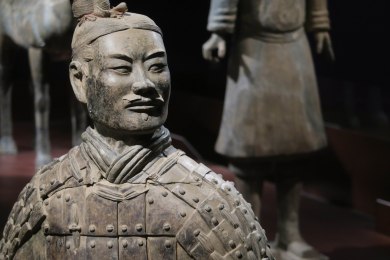 Not too often is there something I’d like to see or do. A couple things on my short list would include the exhibition of Chinese human anatomical dissections and another is Cirque du Soleil. SFSG. Riding the bus at the Chicago meeting I noticed signs proudly proclaiming there were terracotta warriors on exhibit at the Field Museum. The entire army is more than 6000. I just finished a novel in which the setting was in China at the site. A chance! Up close! Alas, it wasn’t the 6000 or even close. But there were some. And it was fascinating to read about it. And then I got to see them up close. No I did not get to touch. Many of the warriors were broken into fragments and were painstakingly reassembled and restored. The ultimate puzzle game! And I did not know that they were originally colorful. The dyes had faded with age. Outside the exhibit I got to pose with them. Cute!

I don’t usually go to the museum in a suit. We had rushed over from the meeting witouth time to change. Did I tell you the one where I was at the meeting in Los Angeles? Universal Studios. We had the opening reception there. 2000 or so neurosurgeons showed up for the evening event all dressed in suits. We rode in the trams sitting tall and straight. The bedraggled tourists, kids in tow, leaving at the end of the day, looked upon this rank and file and thought we must have been brought in as extras for Men In Black. Yes. We all wear dark suits. It’s a uniform. No Hawaiian print. Not for this conservative group! Nope. Nada. And the entertainment band was wildly playing out their hearts. Sweat poured in the warm evening. And when the band finished it’s number, the audience stared back at them. No one applauded. Would this be the definition of a stuffed shirt? So I laugh at myself too. And I try not to wear a tie unless I must. But at the national meeting it’s easier to blend in with the boys then to fight city hall. You don’t have to change your suit. No one will notice.

This entry was posted on June 3, 2016 by Victor Ho. It was filed under Family, Travel and was tagged with Chicago, Family, Museum, Terracotta Warrior.